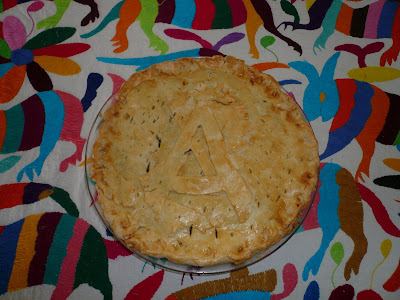 Here it is! The first pie produced in our new house in Mexico–and the first “American-style” pie baked by my artist friend, Ines de Leon. Perhaps it’s Ines’ artistic talent that made her an ace student-of-pie.
When I invited her over for pie (a month after we arrived and we finally had furniture) she emailed me and said she couldn’t wait to taste it. I emailed her back and said, “First make, then taste.” After all, she’s the one who insisted she wanted to learn how to make apple pie (and she agreed to teach me how to paint in return). She was still game.
Because she is currently working on a new art piece in her studio, mixing acrylic and chunks of coal on a large canvas, she arrived with black coal embedded under her nails. I loaned her my nail brush and then we got to work. With the nimble fingers of a painter, she took control of the dough (and didn’t overwork it like most first-timers), sliced those Granny Smiths (imported from New Zealand), dumped an inordinate amount of cinnamon on top, and created a masterpiece worthy of the Louvre. 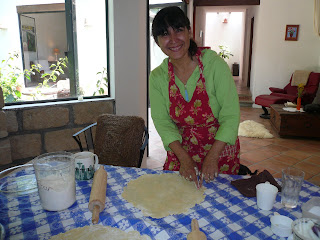 When her pie came out of the oven, however, she broke the news to me that she wanted to save it for her boyfriend who was coming to town in three days. Save it?! I should have been suspicious when she asked how long a pie will keep. “About a week for apple,” I had said. If you think I get tired of eating pie, think again. After making hundreds of pies (for all those Malibu celebrities), the scent of apples and cinnamon wafting through the house still makes my tastebuds fire. So, naturally, I was a little disappointed we wouldn’t get to sit down for a cup of coffee and a slice. 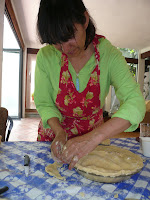 Worse, she asked me to keep the pie at my house because if she took it home her daughter, who has food issues, would eat the whole thing in one sitting. So there the pie sat in my refrigerator taunting me every time I opened the door. For three days.
But this story has a happy ending (these are the only kind of stories I like). After the second day she called and asked if my husband and I would like to come to dinner on Sunday, and meet her novio. And eat pie. And we did. And we were happy. We ate her homemade enchiladas, fried red chile tortillas filled with cheese and onions served with green salad. “Northern Mexico-style, the way my mother made them,” she said. We drank tamarindo soda. And finally we were presented with the pie. Even after three days in my refrigerator the crust was still flaky, the apples slightly crisp, and the cinnamon, well, let’s just say it was prominent. The four of us sitting around her table could have been actors from a scene in the (Mexican) film “Like Water for Chocolate,” where whatever the cook was feeling at the time she prepared the food, those who ate her food experienced the same feelings. What we were feeling was amor, baby, amor.