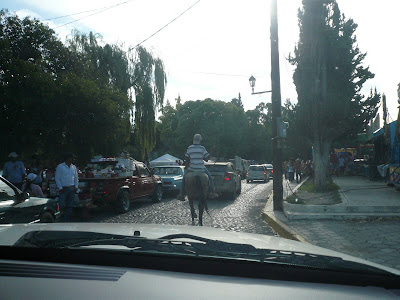 Yesterday we drove to the neighboring village of Arteaga where they have a weekly Sunday Market. Arteaga is where they grow apples. Butted up against the mountains, it is slightly higher in elevation than Saltillo, thus slightly cooler enough to accommodate apple crops. I’ve made my impatience known that I am beyond ready for apple season to arrive. Having moved to Mexico from Portland at the beginning of the summer, I have been feeling deprived of my usual summer pie baking – all those blueberries, blackberries, marionberries, raspberries, and peaches I used to pick myself on Sauvie Island…sniff, sniff. While Mexico has fabulous fruit, I just can’t get excited about a mango, papaya or pineapple pie. I prefer my tropical fruits blended in a cocktail.

Around 4:00 p.m. on Sunday afternoon we drove out to Arteaga in search of apples. That was Reason Number One. Reason Number Two was to scope out the market, er, mercado for setting up a booth to sell my apple pies when the harvest season kicks in. It was an idea I talked about with Ines (my Mexican artist friend) when she came to my house two weeks ago to make a pie. “I was thinking of selling pies at the market during the harvest,” I told her.

“Oh, jess,” she replied in her cute Mexican accent. “I have a friend who has an apple orchard in Arteaga. We can get apples from her. I will help you.”

“I’m serious,” I went on. “How about three or four weekends in a row? Could you commit to that? We’d have to get help making the pies ahead of time.”

“Oh, jess, sure,” Ines insisted. “That would be funny.” Though I know she means “fun.” (“Do what is funny,” she always tells me when I get down about life. Somehow it makes more of an impact the way she says it.)

As Marcus (my husband) and I drove down Avenida Roman Cepeda de la Fuente (it’s not easy learning street names in Mexico), which was lined on both sides with typical street-fair booths, we spotted many different things for sale: used clothing such as army fatigue pants, children’s clothing, and women’s tops; plastic toys, hairclips and other made-in-China dimestore-type stuff; puppies (hopefully these will go to good homes); potatoes and mangoes, and pork rinds.

Pork rinds (chicharrónes in Spanish) are a puffed, salty, greasy snack food, but did you know that it actually starts as a piece of dried pig skin? I did not comprehend this little fact until we inched along in the traffic jam and I got a close-up look at the process – a dried, leathery piece of a whole pig’s skin (resembling the pig’s ears I sometimes buy for my dog, only the whole pig) is dropped into a copper vat of boiling grease, and – voila! — here’s the crunchy delicacy that President George W. Bush is said to enjoy eating. Yum. Row after row of full-pig-body-size pork rinds hung from the awnings of booth after booth, block after block. (This picture is not from Arteaga…it’s from the Web. Next time I’ll be better about taking my own.)

“Not exactly the right demographic for selling apple pie,” I mumbled to Marcus as I continued to gape out the open window.

“Yeah, I don’t think this is your clientele,” he replied. “But can you smell that carne asada? Wow, that smells great.”

Further on, as the booths thinned out, beat up old pick-up trucks and vans were parallel parked with their truck beds loaded with produce. I saw several with mangos, one with potatoes, and, at last, one lone truck filled with apples. Small green apples with smatterings of red, a bit too small for my apple-peeling pleasure. A caramel-skinned mother sat on the back of the truck bed while her young daughter loaded clear plastic bags with apples. Thirty pesos per bag. That’s about US$3. Marcus saw that I was eyeing the apples. “Do you want to get some?” he asked.

“You can get apples at the supermarket,” he said. “Probably just as good as these.”

“I don’t like buying them at the supermarket. They’re all imported. I want to buy them locally. But I’m going to wait. I think they’ll have bigger apples later in the season.”

With the two purposes for our outing accomplished – not accomplished exactly, but at least my curiosity was satisfied – we set off for home in the traffic, Mexican-style. We laughed as the horse passed all the cars. I love it when the low-technology method prevails.