When we came to Saltillo, Mexico for our Look & See trip in May we discovered there was a German bakery in town—the only bakery in town to offer bread more substantial than the empty-calorie Wonderbread-like loaves ubiquitous in the local tiendas. That was in May. By the time we moved here in June the German bakery, along with its German baker, had vanished. Something about a divorce and an expired work permit.

We discovered pan integral—mini loaves made with muesli, seeds and some with olives—at the Costco in Monterrey. But one hour is too far to drive for bread—whole-wheat or not.

Thus it was the idea occurred to me: If I can make my own pie, why don’t I make my own bread?! Sometimes I’m a little slow to figure things out. Then again, in Germany we had a bread machine and in the U.S. we had the St. Honore Boulangerie down the street. I’ve never had to think about it. But now that I’m in Mexico, and life is a little more about “mañana” here, well…

Luckily, I hauled my red-and-white-checked Better Homes and Gardens Cookbook down to Mexico. I flipped open to page 91 and found—aha!—a recipe. Those of you who have baked pies with me, as well as my mother, know I don’t like to measure, let alone follow a recipe. But I followed it. And when I made my first mistake by mixing the dry yeast in with the milk (and not with the flour where it belonged), I even did something I rarely do. I tossed out the debauched ingredients (reluctantly, as I hate waste!) and started over.

I kneaded the dough for eight minutes—what fun! If only you could put this kind of energy into pie dough!—left it to rise, and took my dog and the neighbor’s puppy for a walk in the pecan farm.

I threw the stick for Jack while the puppy rolled in the mud puddles. The sun was shining, and life was good. Until…KABLAM! Thunder struck, the storm clouds raced in and the first raindrops fell with no warning. 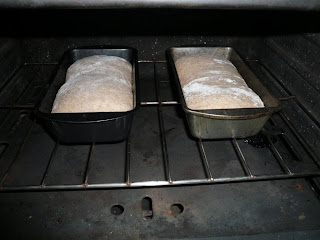 I ran home at full speed. Because, I admit, I did break one teensy rule in the recipe. It said to leave the dough to rise in a warm, draft-free place, preferably in a warm oven. I left my bowl in the Mexican sun, and there was only a slight breeze. If you were bread dough, wouldn’t you rather be outside too?

The dough was rescued in time. The dogs were hosed off before the big downpour. And we will be eating whole-wheat bread fresh from the oven one hour from now.

Meanwhile, my German friend Elke called. “I’m baking my own bread,” I told her excitedly. “Since that German bakery is gone.”

“No,” she said. “It’s open again. It’s the same as the old one, with pretzels and farmer’s bread, but in a new location.”

“What about the divorce, the work permit?” I asked.

I hung up and nodded. Figures. But I have no regrets. I enjoyed being rough with the dough, flinging it down on my vinyl picnic tablecloth, pounding my fists into it, giving it one good shove after another as I kneaded it into submission. And when I take that first bite of warm, spongy whole-wheat with butter melting into it I may never bother to go to the new German bakery.

Then again, better check back here in an hour.
UPDATE: Tastes okay, but it’s a little dense, perhaps a little heavy on the whole-wheat, perhaps a little too violent in my kneading, perhaps it was the rustic Mexican oven. Regardless, the word “brick” comes to mind. Looks like I will be visiting the new German bakery after all.