Even life in Mexico has its ups and downs. 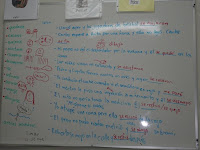 I started my Friday like any other Friday, with my two-hour Spanish class. Not trying to suck up to my teacher or anything, I brought him a piece of the apple pie I made the day before. Pie is for sharing. And seeing that I meant to give the whole pie away, as a thank you to my neighbor, I was able to redeem my selfishness by parting with one slice. I asked my teacher, Jese, “How do you say ‘TGIF’ in Spanish?” He shook his head, “No, we don’t have that expression.” Could it be because every day is like Friday in Mexico? Such is the relaxed way of life here. They’re not killing themselves with competition and long commutes; you can still find shops closed for a two-hour afternoon siesta. 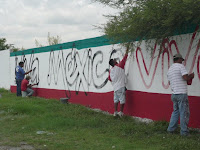 I drove home after Spanish and noticed some roadside improvements under way. This was encouraging considering Mexico’s, shall we say, relaxed approach to maintenance. Mostly one notices the litter. And the billboards reminding people not to. I took a picture for my brother Michael, who runs a non-profit grafitti-prevention/mural-painting program called Operation Clean Slate in Southern California.
When I arrived at home my husband called. “Do you want to come out to the site?” he asked. This was not part of my routine, on a Friday or otherwise. I hadn’t been to the construction site of his company’s new truck factory since our “Look & See” trip in May. The drive out there takes 45 minutes. I had to weigh out my options first: spend the afternoon in my light, airy office gazing out at the pecan farm or navigate the Mexican obstacle course, known as a highway, to go look at steel beams and bulldozers. Since the fight I picked with him a week ago was still somewhat unresolved, I opted for “Good Wife” and got in the car. 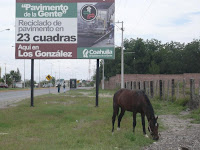 On the way to the factory, only one mile after leaving my house, I encountered a horse running loose down the middle of the road. This is a four-lane throughway with cars going sometimes up to 50 mph (they would go faster if not for the speed bumps). No one was stopping to get this horse off the road. I have lived here long enough (two months) to have seen a dead horse on the road and so many dead dogs I’ve lost count. So I pulled over, held up my hand to stop the cars, and approached the horse. I took the horse’s dangling –and muddy– lead rope and held on while the horse started running across the lanes. Stupid gringo move, perhaps, but I didn’t let go. Still, no one else stopped to help. Suddenly a word came out of my mouth — and I didn’t even know I knew it: “Ayudame!” I called out (help me) and an old man who was gardening at a neighboring house grabbed onto the rope with me. The horse was too strong, it broke free from both us, and trotted further up the road into the oncoming traffic. The old man and I looked at each other and shrugged. “Gracias,” I said, and gave him a tender smile. He smiled back, the one remaining tooth in his mouth beaming white. I went back to my car, cried — for the horse who got away, for the seeming lack of concern for animals here, for the shared smile with the old man — and then continued on my way. 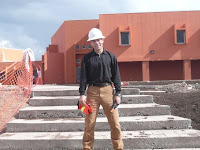 Seeing my husband cheered me up, the white collar executive who looks as good in Carharts as he does in his grey wool suits. Even more cheering, he asked,”Do you want to see the puppies?” 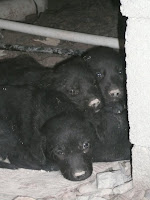 Two stray female dogs have taken up residence at the construction site, and an American man has become their de facto caretaker. He wasn’t able, however, to prevent them from getting pregnant by “Black Joe.” All that road kill is replaced by new life. I was about to start humming that Elton John song from “The Lion King.” 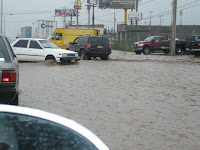 During my site visit we had been pummeled by an afternoon thunderstorm, common for Northern Mexico at this time of year. The streets had turned into rivers. By the time I found a route with water low enough not to flood my low-clearance VW Beetle the 45-minute drive had taken one and a half hours. 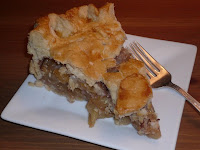 When I was a mile from my house I looked for signs of a dead horse. No, nothing. I can only trust that he was retrieved by his rightful owner who needs to learn to tie a better knot.

Finally, home safely, I rewarded myself for surviving the day. Ah….pie. 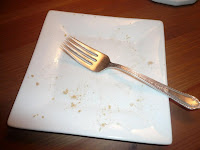 I feel much better now. TGIF.