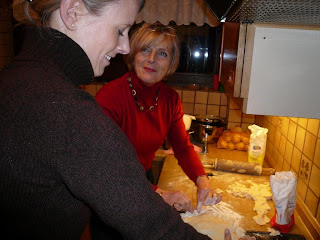 What else does one do when in Germany but teach their hosts how to make American apple pie? As Stuttgart, Germany was where my month in Europe began and ended — due to the non-stop Delta flight I booked round-trip to Atlanta — I found myself making a promise when I first arrived at my friend Julia’s house in mid-October and fulfilling that promise before departing in mid-November. If it hadn’t been for that apple tree beckoning with its ripe fruit right outside the kitchen window the topic might not have come up. Then again, I know there’s no avoiding the pie subject. Julia had come to my first pie-baking party in Portland, Oregon more than one year earlier when we were both living there. (She got a big promotion and transferred back to Daimler headquarters, while my husband got transferred to the hinterlands of high-altitude Mexico.) Julia was determined that I give her a refresher course. (Which, by the way, was a completely fair exchange for the beautiful guest room she was letting me stay in.) Her mother was equally determined. Like mother, like daughter, as they say. 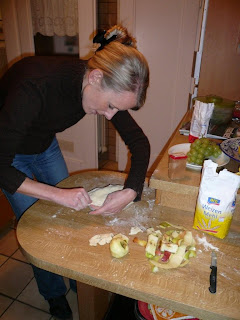 All business: Julia approaches her apple peeling the way she does her job a Mercedes Benz — fast and efficient. 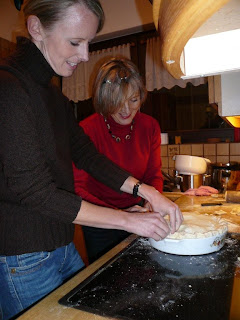 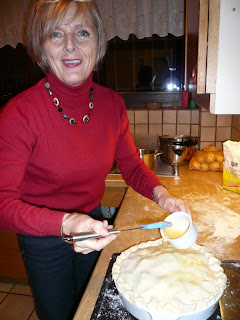 Frau Beck knows what she’s doing. She’s clearly made a number of Apfel Kuchens in her day!

Apples — and the pies they end up in — know no cultural boundaries. Whether Germany or the USA or some other country, apple pie is always delicious, the deliverer of happiness, and something that brings people together — and this one was no exception. Neither do apples and pie care about age differences. Not only two countries, but two generations came together to create something so sweet and satisfying, so delicate and mouth-watering.
Frau Beck and Frau Beck Jr. earned an A-plus in teamwork and final outcome of their mother-daughter pie. We ate the pie for dessert that night and had more for breakfast before I flew off. I look forward to hearing their stories next fall when the apples on their tree ripen again. And for all that I have complained about Germany (for which I apologize!), I hope I can return next November, stay in that beautiful guest room overlooking the autumn-colored hills of Stuttgart, and bake pie — be it American-style or some European recipe– with these gorgeous and generous German women.