There aren’t a lot of things I love about Germany, but there is one thing that I do enjoy. It’s the afternoon tradition of Kaffee und Kuchen. Around 3:00 PM all business stops and people gather around a table for a slice of cake (or pie!), a cup of coffee, and conversation. I was able to participate in the high-caloric relaxing ritual this past Sunday in Stuttgart when I was visiting my friend Foong (I know Foong from an intensive German class I took four years ago).

Now remember, this is Germany and NOTHING — except for gas stations — is open on Sundays. Gas stations and bakeries, that is. The bakeries are allowed to be open for a few hours on Sundays, but this is only after successfully arguing that since the gas stations were selling fresh bread on Sunday mornings bakeries were losing their Saturday business.

So on Sunday, after arriving at Foong’s, we jumped in the car and drove to the neighborhood Konditorei before it closed at three. 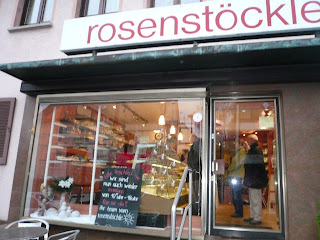 Arriving at Rosenstoeckle, we saw cars coming and going, and a line of customers that stretched out the door. This gave me plenty of time to inspect the assortment of tarts and cakes filled with creamy layers and luscious fruits. I was so taken by the colors and textures, imagining each of the delicious flavors on my tongue, I told Foong I wanted take a picture. 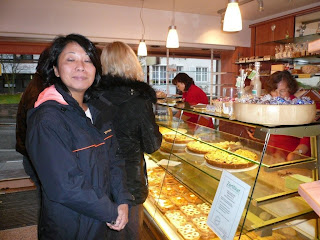 “You should ask first,” warned Foong. Yes, she was right. I had been reprimanded many times during the three years I lived in Germany for (inadvertently) doing something wrong – like not laying my wine bottles down on the conveyor belt in the grocery store or bringing my wedding dress to the dry cleaners with Champagne stains – so I knew asking was the right thing to do in order to avoid the predictable public humiliation.

“Darf ich ein Foto machen?” I asked the woman behind the counter. To subdue her shock (or was it horror?), I explained that everything looked so delicious, especially to an American. To my great relief, her face relaxed and then she turned toward me holding two plates of Schwarzwälder Kirschtorte, known in English as Black Forest Cake. I had meant that I wanted to take a picture of the bakery display, but to see her standing there offering such a generous smile, posing with the plates, I snapped the shot and smiled back. 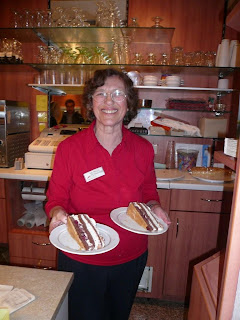 We took our four pieces of cake home – though what we chose was more pie than cake (rhubarb, apple, and plum each nestled in a bed of vanilla custard) – and devoured them around Foong’s dining room table. Her husband Karl and son Oscar joined us, and we chatted about their upcoming travels to Asia, Oscar’s school, and Obama’s win as the cold rain fell outside. As we laughed and ate and finished our coffee I relaxed, reminded that there’s something good in everybody and in every place. And that includes Germany.

1 thought on “What I Love About Germany: Kaffee und Kuchen”