Driving back from the swimming hole on Sunday – where I had spent the afternoon with some new friends seeking refuge from the 108 degree day – we stopped at a small ranch to drop off a borrowed water jug. I had noticed the ranch before, a tidy hillside homestead with a nicely painted sign marking its entrance. We drove the quarter mile up the dirt road a 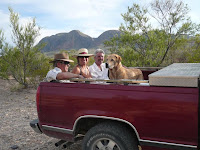 nd pulled up next to the house, which was like many of the “houses” in the area: a large RV parked under a metal lean-to, the covering essential to provide much-needed shade.
We were greeted by the owner of the property, Bob, a small, wiry man with a shaved head and dark beady eyes. He was wearing Levis and leather boots, and a white t-shirt that revealed the definition of his bulging muscles. You wouldn’t want to get in a fight with this guy. He may be only five and a half feet tall but his body mass, and his jumpiness, told me he was ready, with little provocation, to kick some serious ass.
Bob invited us to stay, look around, and “have a smoke.” Tom, who was driving, looked at me, knowingly, and said quietly enough so Bob didn’t hear, “We don’t have to stay.” He could see I was terrified to get out of the truck for fear of what someone with that kind of pent-up redneck energy might do.
But I didn’t want to get a reputation as the scaredy-cat, snotty-pants city girl so I said, “No, that’s okay. We can stay.”
I stepped outside and Bob extended his body-builder hand to shake mine, his grip extra firm. “Very nice to meet you, little lady.” Okay, so he may look menacing but he was very polite. “Let me show you around,” he said.
The place was surprising – actually, no. It was Bob who was surprising. First of all, I was standing close enough to him to discover he smelled of laundry detergent – that white t-shirt was freshly washed. I wondered where he could wash his clothes out here in the desert, and then saw the brand new washing machine by the RV, hooked up with jumper cables to a car battery.
Not only were h 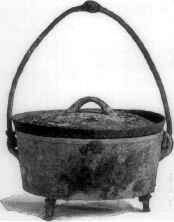 is clothes clean, his place was immaculate. He had planted a cactus garden artfully arranged and outlined with stones. He had planted an even bigger garden of potatoes and tomatoes in symmetrical rows behind the RV and he showed us how he protects them from the sun and how he uses his gray water (from the washing machine) to irrigate. He had a horse trough filled with water, just for his dog to get wet because, as he said, “A Lab’s gotta have water.” He had a large picnic table set with candles and Mexican pottery dishes. And he had an outdoor kitchen: a raised fire pit built of stacked rocks and, in the middle of the pit, three Dutch ovens hung from chains. A Dutch oven is a cast iron pot that uses coals underneath and on top of its lid to create a baking effect. “I love to cook,” he said. He turned to me, his piercing dark eyes softening as he added, “And I make a fine peach cobbler. It’s the best you’ll ever taste. You just put the peaches and sugar in the bottom and put the biscuit dough on top.”
I went home and couldn’t get Bob out of my mind. Mainly, I was mad at myself for how I had judged – and feared – a person who underneath the tough-guy appearance was as gentle and nurturing as – and, Bob, please don’t beat me up for saying this – a little girl. How many more times was I going to have to be beaten over the head with the lesson: Don’t judge a book by its cover? Out here in Far West Texas, away from all my career-oriented, liberal city friends, I seem to be re-learning this lesson over and over. I continue to meet a new cross-section of people I wouldn’t normally encounter – river guides, ranchers, park rangers, and even a few right-wingers – and I continue to be fascinated with how, no matter what their convictions, leanings, lifestyle, or language each person reveals something good in their heart. Good enough for me to accept them as they 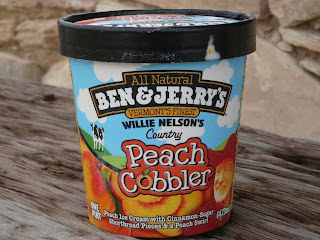 are, and maybe even as a friend.
Continuing to look for ways to beat the heat, I drove to the store later that evening to buy ice cream. It was still so hot I dreamed of taking a bath in the stuff. There in the freezer case of the world’s smallest grocery store (the only store for miles around), among the vanilla and chocolate, was one lone pint of Peach Cobbler Ice Cream. I thought of Bob. I thought of buying it for him, but seeing as it would have melted by the time I got to his ranch, I wrote this story about him instead – and ate the ice cream myself.