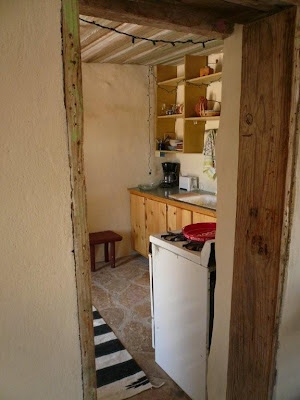 I have two apple crumble pies in my (propane-powered) oven. I am finally making good on my promise to Mimi that I would come back to Terlingua and bake pies for her espresso bar. She is expecting a full house at La Posada Milagro for the 4th of July holiday weekend. Yesterday, she drove to the nearest grocery store – Fairway Market in Presidio on the Mexican border – and bought me whatever she could find in season for pie fillings. But this being the desert where it’s hard to grow anything, let alone fruit, in the 100-plus degree temperatures, she came back with only imported apples and bananas.
She asked me how much I would charge her for baking. How could I charge her anything? I wondered. It’s because of her that I’m here; it’s because of her I’m so happy in my new home. I never would have known about this tiny town if not for her. Besides, I love baking pies. I love it so much I’m willing to do it for free. But I did pause for a moment and think about what I could charge. “Tell you what,” I said. “Let’s work on the barter system. I bake for you and you let me do laundry at your place. And use your Internet access. And, well, I’m always borrowing stuff from you. So let’s just call it a fair deal, okay?”
She smiled and said, “That’s not exactly fair for you. You would have about one load of laundry a month.”
“True,” I said. “But that’s not the point.”
I was glad she didn’t argue. Instead, she launched into the details. “There’s a new washing machine,” she said. “I paid a thousand dollars for it. It works really well.” I’d seen it; it’s a Bosch front-loader sitting outdoors on a rock patio in front of her caretaker’s cabin. “What’s really nice is you can hang your clothes on the line to dry. They’ll smell so good, like the clean desert air.”
I look forward to fresh desert-scented clothes. But right now my clothes – and my whole house – are permeated with the scent of apples and cinnamon. I’d say I’m getting the better end of the deal. Except that suddenly I can smell something burning in the kitchen. Guess you get what you pay for!

1 thought on “The Barter System: Pies for Laundry”