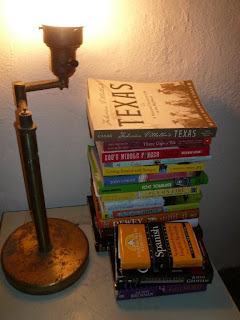 I was writing in my journal– about how I ended up giving the pecan pie to the married man after all, and how he liked it so much, and how I liked him so much, and how it would all just end up badly as these things inevitably do, and how tragic and doomed the whole damn love story thing was – when I saw a spider scurry by my bare feet. (Thank goodness for peripheral vision!) The spider, medium in size (though miniscule compared to a Tarantula), had a black body with skinny WHITE legs. He was fast. He was confident. He was good looking.

I jumped out of my rocking chair as he ran into the corner behind it. My killer instincts kicked in – I would throw something at it and rid the uninvited visitor from my home. Not wanting to ruin my new cloth-bound journal I grabbed the first book from the growing library pile on my side table. On top of the heap was my small Spanish dictionary, its years of overuse causing the pages to loosen from its spine, and as I threw it the loose pages flew through the air scattering all over the floor. Not an effective weapon. The spider successfully avoided contact and simply moved one foot to the right.

Even in my state of angst I knew enough not to throw my brand new copy of “Three Cups of Tea” by Greg Mortenson. More importantly, I didn’t throw Mimi’s book, also new and on loan to me, “Federico Villalba’s Texas” by Juan Miguel Casas, about the early Mexican settlers of Terlingua. It’s the book I had been reading before my thoughts returned (as they have been all too often lately) to the pecan pie, the married man, and, worse, the lust I felt while watching the married man enjoy eating my pecan pie. It was a little hard to concentrate on 19th century interracial tension in a tiny Texas mining town while thinking about that pie, which is why I put down the book and picked up my pen and journal. But back to the spider…

Instead of the new books I grabbed the two old paperbacks my dad left behind after his June visit. “You’ll really enjoy these,” he assured me. “Great,” I replied. “I’ll read them. Thanks, Dad.” Never intending to read them, the only reason I still have the books is because I don’t know yet where to find a local book recycling center. Therefore, “The Innocent Man” by John Grisham and “Fatal Secrets” by Allison Brennan went hurling into the corner of my little rock cottage living room. “Here’s a Fatal Secret for you, Mr. Spider.” WHACK!

Not sure if he was dead, I ran into the kitchen to fetch the fly swatter, nearly knocking over the fan in my hurry. I returned to the living room, swatted the corpse with a few more death blows, and scooped him onto the plastic swatter head to carry him to his final resting place – the garbage can. Peace restored, I refilled my glass of white wine, noting as I opened the refrigerator that I still have pie dough to roll along with leftover chopped rhubarb to make another “Jim Carrico Special.” I had meant to make that pie today, but seeing as procrastination is a quickly and easily acquired trait here in Ter 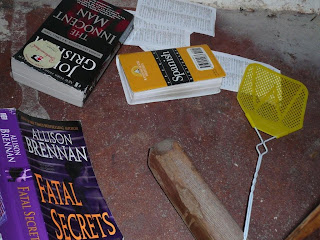 I resumed writing in my journal and wondered if perhaps the spider was another one of those omens I’m so good at ignoring. Did the spider represent the married man? After all, my “Special Friend” – also fast, confident and good looking — had called me this afternoon. Like the spider, he cheerfully and innocently scurried into my world, when out of nowhere I pummeled him with the equivalent of a stack of (hardback) books. I let him know that men of definitive, unchangeable marital status were not invited in my home. Like the spider, I stunned him into silence and left him for dead on the other end of the phone line.

The thing is, it wasn’t his fault — he is “The Innocent Man.” I’m the one who made him the pie. His only crime was eating it and telling me how much he liked it. His enthusiasm only made me want to make more pies for him, many more pies, I would make him pies for breakfast, for lunch, for dinner, for the rest of his life, and then….well, just as quickly as one can spot a spider that must be killed, it dawned on me that this story has been told a million times – by Shakespeare, by Jane Austen, hell, probably even by John Grisham — and the ending would not, could not be a happy one. No matter how badly I want it to be my happily-ever-after fairytale. No matter how much he likes my pie.

Since I didn’t heed the moral of the story last time, it bears repeating – -with a little addendum:

Be Careful Who You Bake Pies For – You Might End Up Throwing Books at Them and Inflict Irreparable Damage. And, when you live in Texas, it’s always a good idea to keep a flyswatter within reach.