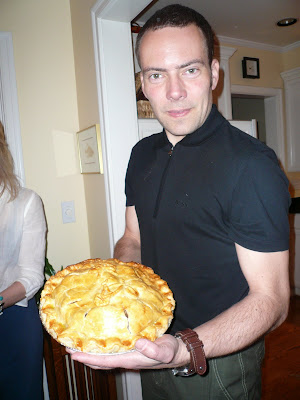 Marcus was my husband. He was fit. He was smart. He was stylish. He was funny. He was many things. He was also a very good pie baker. And that’s about all I can say right now because I can’t see the computer screen through my tears. I loved him and will miss him so very much.

From the funeral program:

Marcus Iken was born in Bremen, Germany on July 2, 1966. He was raised in Lehnigen (just outside of Stuttgart) by his parents Marulf and Angelika. He got his first motorcycle at the age of 16, which gave him the freedom to meet girls! He got his master’s degree in engineering, and afterward spent several years in London, where he perfected speaking English with a beautiful British accent. Upon returning to Germany he got a job at the Fraunhofer Institute, which eventually led to a position at Daimler. His work took him from Stuttgart, to Portland, to Mexico, and then back to Germany. In 2001, he met Beth Howard at Crater Lake National Park. They married on August 22, 2003. Their life was a great adventure with motorcycle trips through Italy, scuba diving in Turkey, backpacking in the Alps, and road trips in the US. They equally enjoyed gourmet dinners and luxury hotels. Marcus developed a love for road and mountain biking, as well as yoga. He loved hot saunas and ice cold showers. He loved watching the History Channel, drinking café lattes, grilling, and throwing the stick for his dog Jack. He was a very dedicated employee — they called him a rock star at work. He was a loyal husband. He lived his life to the fullest, diving into everything with discipline and enthusiasm. He died on August 19, 2009 of a ruptured aorta due to a congenital heart condition. He was 43. We will miss him very much.

5 thoughts on “In Loving Memory of Marcus Iken”