Marcus died three months ago today. When is it time to let go of his stuff? Six months? A year? Ten years? Never?

We kept a storage unit here in Portland and I gathered up the nerve to set foot in it last week. Actually I went only to look for a tax document and stayed three hours. I organized all of clothes he had with him during his vacation in August, clothes that our friends tossed into garbage bags in our rush to make funeral arrangements.

Marcus took good care of his belongings, he folded every shirt, sock and pair of underwear with painstaking precision. He wouldn’t have liked his things being treated this way. So I folded everything and placed it neatly in the large plastic tubs — though I admit I smelled every item before putting it away, burying my face in the armpits of his shirts and the crotch of all his pants, longing for any hint of his scent.

I talked to Melissa that evening and she said, “Why don’t you just pick ten things to keep and give away the rest?” To which I snapped angrily, “It was enough for me just to organize. I’m not letting go of anything!” 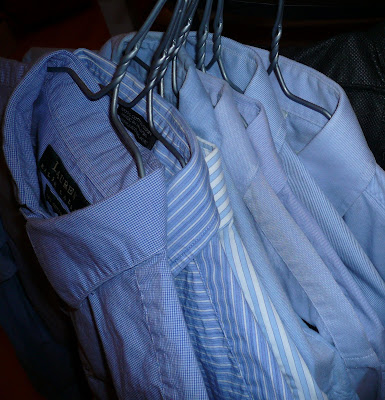 PHOTO: Dress for success. Marcus looked gorgeous in these shirts and always ironed them himself.

That was last week. I went back to the storage unit today to collect Marcus’ dress shirts and wool trousers. My youngest brother wears exactly Marcus’ size and I suggested I give him Marcus’ cashmere sport coat as he just started a new job. He said yes and added that he was in need of more business clothes. I decided the rest of Marcus’ work clothes would go to him, keep them in the family as a win-win. Marcus would approve and I wouldn’t feel like I was truly letting go of them.

As I rummaged through the tubs I noted Marcus’ abundance of hats, gloves, socks, fleece jackets, and sweaters. In my recent manic desire to clear out all clutter from my life, to simplify, to downsize (if one can actually downsize from a studio apartment), to lighten my load, I considered giving away Marcus’ warm clothing. “Think of all the homeless people out there who could benefit from this pair of fleece gloves or this great hat,” I thought.

Oh, but he wore those gloves to the park when he threw the stick for Jack. I bought him that hat in New York, in Little Italy. He looked so cute in it. We had so much fun that trip…

No! No, I couldn’t do it. I couldn’t give this stuff away, HIS stuff.

With tears streaming down my cheeks, I put away the hat, gloves and everything else except for the dress shirts and trousers and snapped the lid shut on the tub. I pulled the door closed, locked the padlock and left the rest of Marcus’ belongings where they were, secure, unused, and waiting for some distant day that I might be able to let go — or at least go back and smell them again.

1 thought on “Letting Go of His Stuff…Or Not”