The question loomed for weeks: “How would I get through the holidays? How would I survive my first Christmas and New Year’s Eve without Marcus?” Many friends worried about me, calling and emailing to offer their good wishes and support. I worried about me too. But luckily I discovered something important during my early December drive — in the big RV — from Portland to Los Angeles: I FEEL BEST WHEN I’M IN MOTION.

Which is why I left LA after almost 2 weeks there and kept on driving – 400 miles east to Phoenix, Arizona. I hadn’t planned on coming to America’s fifth largest city, let alone staying here for 2 weeks and counting, but here I am. I accepted a very enthusiastic invitation from my Portland friends, Alison and Thomas (the same ones I spent Thanksgiving with), to join them for Christmas at Alison’s mom’s condo in Scottsdale. 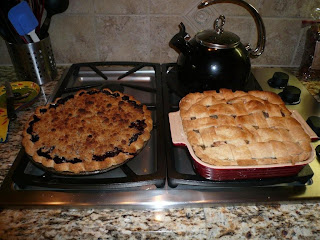 No matter that I drove through a dangerous dust storm to get there, once I arrived Alison’s laughter buoyed me. But not only that. Even though I wasn’t driving we stayed constantly in motion – hiking every morning in the local mountains, swimming every afternoon in the condo’s pool, cooking big meals, and – something that always makes me feel better – baking pies. And Alison got me to do something I’ve never done: color my hair. Her sister Emily helped pick out a boxed blond shade from the grocery store and – voila! – I lightened up! I really did feel lighter – not just because of my new hair color, but because I made it through Christmas without having a complete Oh-My-God-I-Can’t-Believe-Marcus-is-Dead Meltdown.

The other thing I was reminded of when I drove south from Portland was this: I FEEL BEST WHEN I’M IN THE SUN.

When Alison and Thomas’ vacation time ended I couldn’t bring myself to leave this desert town and its brilliant, blazing sun. They had to return to drizzly, gray Oregon for work, but seeing as I’m unemployed, lost, confused and – let’s face it – still mired in grief, I simply drove my RV 20-some miles down the road to my aunt and uncle’s home in Mesa.

Uncle Mike and Aunt Sue are snowbirds from the Midwest, meaning they are retired and spend their winters golfing in Arizona rather than shoveling snow in Iowa. Smart people! They live in a trailer park for 55-and-over, and though I don’t qualify in the age category I was warmly welcomed as a guest. The RV fit right in, parked among the double-wides, and we settled into a busy schedule that included more hiking, swimming, hot tubbing, and watching movies from the horizontal comfort of La-Z-Boy recliners. Okay, so the latter is not literally “in motion” but escaping into films like “The Secret Life of Bees” engaged my heart and mind enough to help me forget about my holiday fears, my sadness, my loss, my husband.

Lest I get too comfortable in Retirement mode – and I could easily see myself getting accustomed to the recreation-packed lifestyle! – I packed up the dogs and drove out of the trailer park. Unsure of where I was going next – maybe back to LA, maybe find a campground outside of Phoenix, maybe head north to Sedona – I was stocking up on supplies at a local Trader Joe’s when my cell phone rang. It was Maggie. Maggie is my friend from Chicago whose husband died without warning six months before Marcus.

Maggie’s call was a reminder of something else: WHEN YOU DON’T KNOW WHAT TO DO LET THINGS UNFOLD AND THE ANSWER WILL PRESENT ITSELF TO YOU.

“I’m in Phoenix, staying with my friend Christina” she said. “Come join us for lunch.” So I drove the RV only 10 miles west, to downtown Phoenix, parked the RV under the trees of Christina’s old town hacienda-style home, and went out for lunch.

Lunch lasted two and a half days. 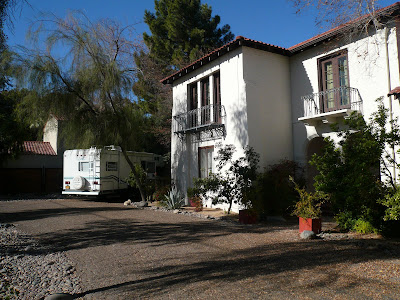 Christina is also a widow. Her husband and Maggie’s husband were best friends. We recognized the irony of being “Three Merry Widows” and thus glommed together like underbaked sugar cookies. “If you don’t have to be anywhere for New Year’s Eve,” Christina said, “then stay here with us.” How else would I have gotten through the hype of this dreaded holiday? Instead of being forced to fake we were happy about welcoming a new year – a new year that would be void of the men we loved – we got busy in the kitchen. Christina grilled steaks (Marcus would have loved that!), Maggie made the salad, and, naturally, I baked a pie – apple.

As the minutes ticked past 11:59 to 12:00 and 12:01, I breathed a sigh of relief that, officially, the holidays were almost over. Ah, but that was good news/bad news. The holidays might be ending but that also meant I would have to stop running like a fugitive. I would have to leave the sun, put the RV back up for sale, stop living in constant motion and return to Portland, where the reality of living a life without Marcus would have to be faced.

But the cell phone rang again. This time the call was from my best friend from childhood, Nan, who was en route from New York to LA, where she would be spending the next five months directing a new play she wrote. Phoenix was not a planned stop on her trip, but she and her husband had a last minute change in plans. “Come stay with us at my sister’s house,” Nan insisted. That took no convincing as I had stayed at her sister’s house once. It’s a stunning palatial estate in the shadow of Phoenix’s Camelback Mountain.

I drove maybe 5 miles this time from Christina’s house to Nan’s sister’s and parked the RV in the circular driveway, just in time for a million dollar view of the sunset against the Camel’s red rocks. The next thing we knew one overnight turned into “let’s stay another night.” 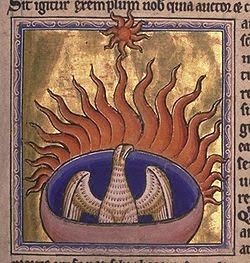 Phoenix seems to have an odd grip on me. Two weeks after I arrived here, I am still here. And two weeks is how long it took me to recognize this: PHOENIX IS THE BIRD WHO ROSE FROM THE ASHES. A PHOENIX SYMBOLIZES REBIRTH.

This realization only hit last night when Nan, Steve and I opened an expensive bottle of Pinot Noir, wrapped ourselves in blankets, and sat around her sister’s outdoor fire pit. Nan made us all write down on paper what things – qualities, behaviors, whatever – we want to get rid of from the past. We were to then throw the paper in the fire and start the New Year by leaving these (presumably negative) things behind. I looked at my blank piece of paper for a while and turned to Nan. “I don’t know what to write,” I said.

Nan – who knows me better than anyone in this life, Nan, who rushed to my side the day after Marcus died and got me through those first horrible days – replied, “I do.” She took my paper and wrote SORROW.

I watched the paper burn in the flames, tears streaming down my face. Does letting go of my sorrow also mean I have to let go of Marcus? I don’t want to let him go. But I understand Nan’s message: Letting go of the sorrow is the only way to keep living.

I believe she’s right. If for no other explainable purpose, it’s simply our job as humans to keep living as long as we’re graced with the opportunity to be here. (And to think I said I was unemployed.) If roles were reversed, if I had died and Marcus was still here, he would certainly be embracing life fully and not losing himself in sadness.

The paper continued to burn into white ashes, floating up to the heavens, hopefully carrying a little bit of my sorrow with it, making room for rebirth, for new life.

I don’t feel reborn, but it’s a symbolic start and the perfect culmination to my time here. With the help of some very special old and new friends – Alison, Thomas, Alison’s sister and mom, Uncle Mike, Aunt Sue, Maggie, Christina, Nan and Steve – I have made it through the hurdle of the unimaginable – my first holidays without Marcus. As my journey continues I will keep seeking the things that heal my soul – sun, movement, openness and resurrection – no matter where the road takes me.

Nan and Steve already left for LA and I said I’d be just a few hours behind them. Except that my phone just beeped — not with a call this time but a text message. “Are you still in Phoenix?” my Aunt Sue wrote. I haven’t replied yet, because my instincts tell me it’s time to move forward – even if I can’t say yet which direction that is. The New Year awaits.