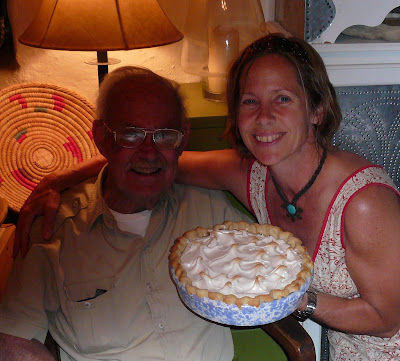 Death is part of life. I continue to be reminded of this almost daily. Yesterday, on the day that marked six months of Marcus’ passing, I learned that Bob Webb, father of my friend Mimi, died. He passed away a few weeks ago, I was told by Betty, my Texas landlord who just lost her faithful four-legged companion, Shippy, due to old age. I just saw Mimi the day I left LA to return to Portland in the RV, so I can only surmise Bob passed away immediately after my visit with Mimi. I met Bob this summer in at Mimi’s La Posada Milagro Guest House in Terlingua and made him a Banana Cream Pie. I fell in love with him as if he was a surrogate grandfather and he, in turn, adopted me as his “fifth daughter.” Our time together was short but as sweet and nurturing as the vanilla pudding in the homemade pie. Mimi cooked us suppers as Bob and I sat around the kitchen table where he talked animatedly about his days in the war, when he lived in Japan and Germany. He was interested in hearing about Marcus’ work (Marcus was workng in Germany this summer) and even spoke a little German with me. Well, now Bob will be able to meet Marcus for himself and ask him all about what it was like to be an engineer with a German automotive powerhouse. Better yet, Bob will be reunited with his two late wives.
Whatever version of heaven you believe in, I like to think there will be a huge smorgasbord of pie and that Bob is up there right now helping himself to the biggest, best piece of Banana Cream Pie he’s ever tasted. (As for Marcus, surely he’s enjoying some good German beer with his pie.) We’ll miss you, Bob. Party on, dudes. And save some pie (and beer) for the rest of us, because we’ll all be joining you eventually.