Sometimes people send me links to pie stories in the media and pie-related postings on other people’s blogs. I keep a running log of all of these, and I plan to mention them in a blog post at some point…yes, I know, I’ve become quite the procrastinator lately. But today pie-contest book author Gina Hyams sent me this post about Pie vs. Cake: A Scientific Approach and I knew it must be shared immediately! It’s from a blog called Hyperbole and a Half and its creator is fabulous, if not slightly insane. Reading her blog made me snort from laughing so hard. And though she doesn’t usually write about pie, she should take note from Pigmy Will and create a regular pie-loving character. Perhaps one of her shark-sloth or dinosaur-drag queen hybrids (like I said, slightly insane) could promote pie consumption the way she took liberties with the Cookie Monster promoting cookies. Just a suggestion. 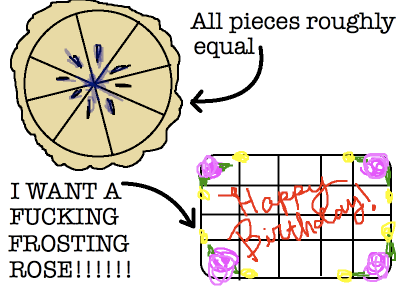 As long as I’m taking a break from procrastination, let me tell you about a few other pie findings out there in the news and blogosphere.

Fellow Portlander Joel Weiler recently launched Make Me Some Pie, a blog dedicated to pie in pop culture, and obviously I have had my head buried under my down comforter for too many days in a row because I just saw that he already mentioned the Pie vs. Cake post from Hypebole and a Half a few days ago. I really must create that Google Pie Alert I’ve been putting off for months now.

And here you have, better late than never, Pigmy Will’s recent video installment, “Diet Pie.” I must admit to being thrilled at this one because the idea spawned from our TV shoot when we interviewed Pigmy Will’s creators. I mentioned a cocktail napkin I had just seen depicting two fat men eating pie with a caption reading “It’s just fruit.” Here is PW’s take on that. (Speaking of slightly insane…)

If the pie creativity continues to be this inspiring I might have to update my blog more often! I promise, I will, as there’s some great stuff to come soon — including an article on The World Needs More Pie in next week’s Portland Tribune, and we are just one voice-over away from completing the 2-minute promo reel for our TV-pielot.

2 thoughts on “Pie Sightings in the Blogosphere”