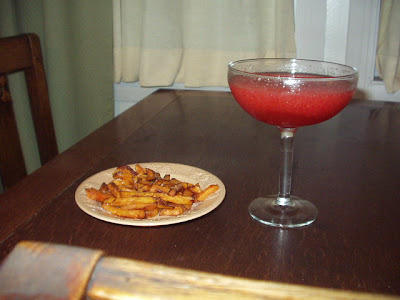 I was feeling a little guilty over advocating alchohol as a pain soother in my last post, but my guilt was assuaged when I received an email from my friend Angela in Santa Monica.

She wrote, “Sorry to hear you had a grief burst and about your MINI ding. But I’m all in favor of your non-pie pick-me-up. In fact, ever since I saw your picture of a cocktail and sweet potato fries and I was dreaming of nothing else. So last night I gave in. I realized I had the fixings of a strawberry margarita and a yam in the fridge. Not as elegant as yours, or as gutsy as going to a bar alone, but delicious nontheless. I took a picture and made a toast to you for the inspiration. Thanks!”

This Ripple Effect wasn’t just working with cocktails. I also watched it in action this past week with pie. I was interviewed by the Portland Tribune for an article about pie (more on that exciting news later) and after the photo shoot of pie making in my tiny Portland apartment I was left with a giant apple pie. The reporter was not allowed to accept any “gifts” (not even pie) but I still did what I normally do with pie — I gave it away. This time to a neighbor who had just broken her leg. This is the same neighbor who displays a glass cake plate prominently in her kitchen window filled with an ever-rotating supply of her homebaked goods. I gaze longingly into her cozy, warmly lit kitchen on my nightly dog walks, hungry for a taste of whatever gooey cookie or frosted cake beckons from the window. Knowing the glass plate would be sitting empty while she was confined to her bed I delivered the pie to fill the void. 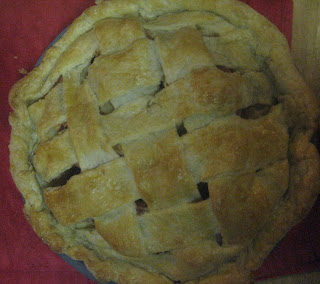 The Ripple Effect worked in two ways with this one pie. One, I rarely get to eat my own pie, but once I delivered the pie to the neighbor I got asked if I would like to come back later in the evening and sit down with the family to join them for a piece. I was very touched and said yes. Later, I got an email from the newspaper reporter, sounding ebullient, about how she had watched my pie baking technique, gone home, and with her sister made an apple pie. She sent me a picture of it, looking like a prize-winner with its lattice top. I was proud.