I had a bad dream last night. In my dream I was driving my MINI in Seattle, across the 520 bridge. It was raining (surprise) and the traffic was very heavy (surprise again). There were people standing on the sides of this highway/floating bridge, and they looked desperate, the way people do in a science-fiction movie when they’re the last people left on earth. As I kept driving the rain turned to snow. It became almost impossible to see out the windows. And then, as it happens in dreams, I was suddenly no longer driving the MINI but the RV! I turned my head to look at the road out the rear window and instead I saw the table, refrigerator and bed. I had zero visibility of the road or my surroundings. It was like I was on an RV death drive. The last thing I remember is being scared, preparing for the dive of the RV, with me in it, into Lake Washington… And then I woke up. Phew. 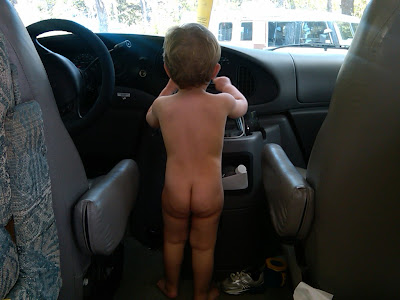 I know it was only a dream because I got an email while I was having my morning coffee. It was from my German friends Joerg and Katrin, to whom I had loaned the RV for the holiday weekend. (No, please, take it, I insisted. After that last long trip from LA to Seattle I really don’t want to look at it again for a while!) The email contained a photo of their son Nolan inside the RV. (Where he appears to be playing with the stereo. Gulp!)

I wrote about Nolan in October in “Eight Reasons to be Happy,” claiming him as my new boyfriend after he cheered me up by playing peek-a-boo with me at Marcus’ funeral. Nolan will be two in July, he still likes to play peek-a-boo, and he still makes me laugh. (If only more people possessed this quality!) He has a few more teeth now and though he still can’t verbalize much his mom taught him to say my name. It comes out as “Beh” in the sweetest baby voice and he says it with a twinkle in his eye, clearly proud that he has learned something new, something that makes everyone within earshot clap and cheer. Talk about making my heart melt! And from the picture I can see his cute body has the potential to be as gorgeous as Marcus’. Just look at that little booty! Now if he can just learn to drive he can be my personal chauffeur and I won’t have to have any more RV nightmares. But by my calculations I’ll be about 65 by then. Oh well. It’s nice to dream.