Skip to primary content
On Saturday I was in the shower and looked down at my chest where I saw what looked like a small-but-dead black bug. After a second glance I realized, no, it was not an insect. It was a false eyelash that had come unglued from my eyelid.

The sight made me laugh, in a disbelieving kind of way, that THIS is what my life has come to: grieving widow uproots herself from the security of her Portland home to travel across country in her Mini Cooper with two dogs and a bin of pie baking supplies and in the midst of judging pies at the Iowa State Fair ends up at the Des Moines, Iowa headquarters for Better Homes & Gardens magazine to have her photo taken for the November issue. Huh?! 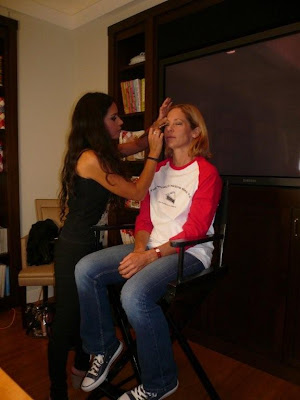 Kelly Kegans, the editor who corralled me into this gig, sat and watched (and sent emails on her iPhone) while Mary-Kate the professional make-up artist applied copious amounts of foundation, concealer, eye shadow, blush and….drum roll….false eyelashes. When I saw Mary-Kate pull out her little containers of the fake hair I looked over at Kelly beseechingly. In truth, I didn’t just look, I mouthed the words “What the…?!” to her. She laughed — though I detected a trace of sympathy. Mary-Kate said, “Don’t worry, you will look perfectly natural in the photos. Even Gayle gets false eyelashes for her picture.” The Gayle she is referring to is BH&G’s editor in chief, Gayle Butler. I had seen Gayle’s picture and indeed there was no trace of stage-like make-up or false eyelashes. In fact, she looked fresh-faced and beautiful.

After she glued on the lashes I blinked my eyes rapidly and hummed the “I Dream of Jeannie” theme song. I’m not sure if Mary-Kate appreciated my humor, but she tolerated my intolerance of her craft. Really, I should learn better manners.

The plan of the day was to do the photo shoot with me first, then have me give a pie baking lesson for the BH&G editors in the test kitchen. But life — whether in the magazine world or otherwise — doesn’t usually go according to plan. After the make-up was applied and the shine on my forehead doused with an extra brush of powder, the photographer did not show up as scheduled. He was delayed by a certain high-maintenance super model he was shooting for the cover, some brown-skinned bird who took longer in the oven than expected. The magazine editors began filing into the test kitchen, ready to make pie. So that’s what we did. 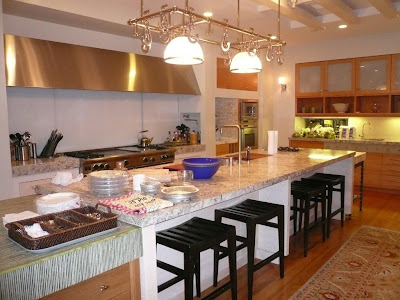 Photo: The Better Homes & Gardens test kitchen, before we made a mess of it.

I shouldn’t have been wearing the purple long-sleeved sweater I brought for the photo shoot for my pie class — I never make dough with long sleeves — but with no time to change clothes I jumped right into instruction-mode. “First measure two and a half cups of flour into the bowl, then add two sticks of butter,” I began. I ran up and down the long kitchen counter, supervising the dough mixing. “This is not bread!” I reminded them. “If you feel the urge to knead, then don’t make pie, make cinnamon rolls.”

One of the editors, who is known to her fellow staff as “quite the wordsmith,” said, “It’s like you want to fluff the dough.”

“Yes! Fluff! That’s a great word. I’m going to use that from now on,” I told her. She smiled. Turns out the woman, Oma, is Kelly’s boss. I’d like to have her for my boss anyday.

One “student” was intent on working her dough, practically beating into submission, and I gave her a stern reprimand. “Take. Your. Hands. Out. Of. The. Dough. Now.” Too stern, actually, as it turns out she is one of the chief bakers in the test kitchen. Oops, sorry! 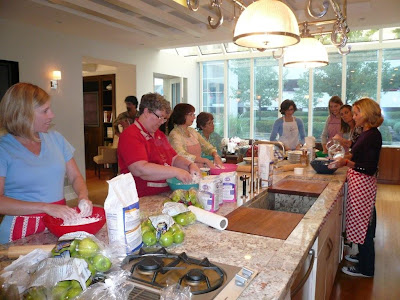 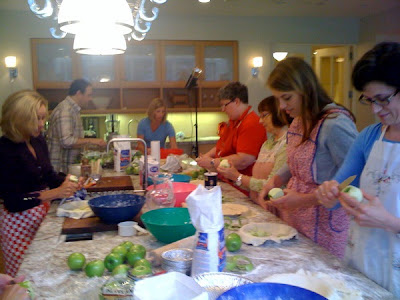 But I got a stern reprimand of my own when Mary-Kate came over and looked at my face. “Tsk, tsk, tsk. Look at you,” she said, shaking her head. I was a melted mess, mascara was running off my eyes, and my face was so sweaty and shiny (from all that supervising and sticking my head in the oven) you could see your reflection in it. She came back with her giant powder brush to touch up my face, and then brought over her lint roller to get all the flour off my sweater. 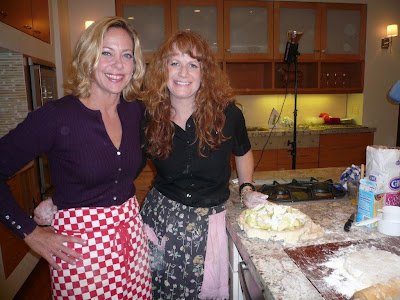 PHOTO: The gorgeous Kelly Kegans and her long red locks, and me with my penciled in eyebrows and false eyelashes.

At last the photographer and art director arrived on the scene and the shoot began. They had me peel apples, but when the photographer asked me to look at the camera and not at the apple while holding a knife in my hand and peeling I once again shot a look at Kelly Kegans. “Hey, when I signed that photo release form, did that also include a release of liability for any injury caused by my paring knife?!” 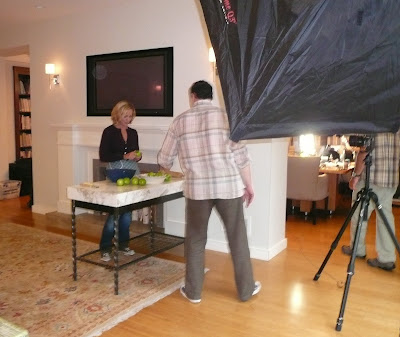 The shoot went fine (no reenactment of Julia Child and her bleeding!) and the pies all turned out looking so picture perfect they were used in the photo shoot. Too bad the pies weren’t slated for the magazine cover. Everyone knows pie is the best part of Thanksgiving. Maybe next year.

BH&G’s slogan is “It’s where life happens.” But it should be forever changed to “It’s where life — and pie — happens.” May there be many, many more pies made in that test kitchen and beyond and, pretty please, no more false eyelashes.