How does it work to be a pie judge at the Iowa State Fair? Let me walk you through the process from becoming a judge, to tasting the pie, to receiving a blue ribbon.

First, you get “hired” by the Iowa State Fair Food Coordinator, Arlette Hollister. Arlette has held this position for 20-some years and is responsible for growing the food department so successfully that the Iowa State Fair now reportedly boasts the largest food competition in the world! Here’s a nice article on Arlette and her work in the Des Moines Register. That’s Arlette (and me) below standing in front of “Arlette’s Corner,” which serves as her Command Central in the Elwell Family Food Center, where the food competitions are held. 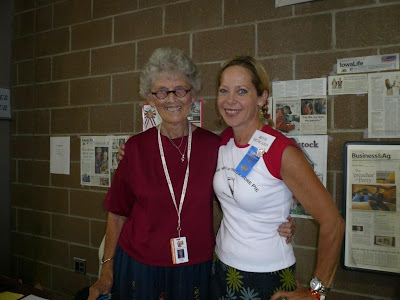 Pies are accepted up to 15 minutes before the competition begins. There were 11 pie categories this year, each with about 20 entries — ranging from chicken pot pie, to French Silk, to pies made with Pillsbury and Keebler Crusts, to classic peach and apple — with one category, sponsored by Iowa Machine Shed (a Midwestern restaurant chain that serves homestyle food), attracting 300 entries! And yes, I had to taste every one of them! Photo below: Pie contenders are assembled in a secure holding area, heavily guarded by fair employees. 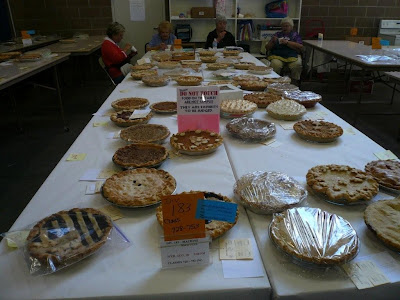 Meet Donna (below), an 84-year-old beauty, who is in charge of getting the pies out to the judging areas for their scheduled events. What you can’t see in the photo is that Donna is wearing brand new high-tech running shoes — built for speed! She recognized me from my Des Moines Register article and shared that she is twice widowed. You would never know it by her good nature and ever-present smile. I can only hope to have her warm spirit, grace and spunk when I’m her age! 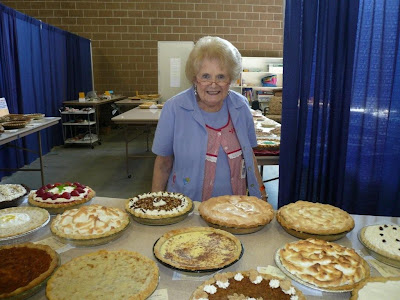 Below, Donna in action! Pushing pies out to meet the judges. 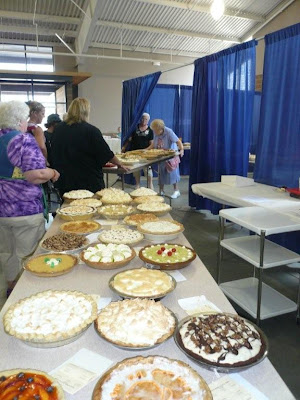 Next step in the pie contest: Arlette Hollister introduces each category, assisted by her team who shuttle pies to the judging table and set up the judges’ eating stations with forks, pie servers, napkins, wet washcloth, and a pitcher of water (to cleanse the palate). Photo below is the Pillsbury Refrigerated Crust category with some very beautiful looking — and tasty — pies! 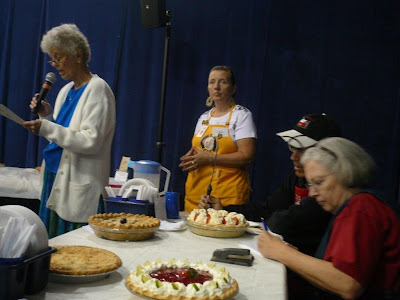 A team of judges gets to work. Each judge has an assistant called a “writer” who literally writes down the comments and scores for each pie being tasted. As you can see by the photo below, it’s a serious business. 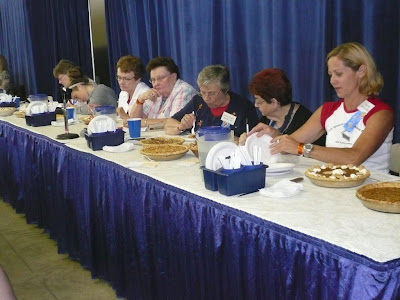 Here I am, judging pie, one bite at a time. The woman pictured to my right is Patt Kerr, who volunteered to be my writer for most categories. We made a good team. She teased me a lot for some of my irreverent judging, strong opinions, and — egads — occasional use of the “F” word, but never commented about me picking off and eating pie crust with my fingers. 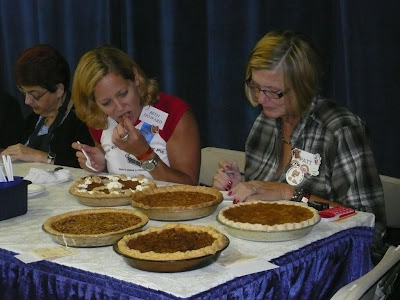 And the judging continues…. Below, it’s the “Oh My, It’s Peach Pie!” category sponsored by Neal Rhinehart of Marshalltown, Iowa. As a sponsor, Neal (in yellow shirt) set the criteria, which required that each pie have a double crust and that all pies would be given away by the slice to the audience after judging. He even brought plates and forks for this. Naturally, this was popular with the waiting crowd. I mean, who wants to just sit there and watch other people eat pie?! I hope Arlette will ask other pie category sponsors to implement this sharing of pie next year. After all, sharing is what pie is all about!!!! 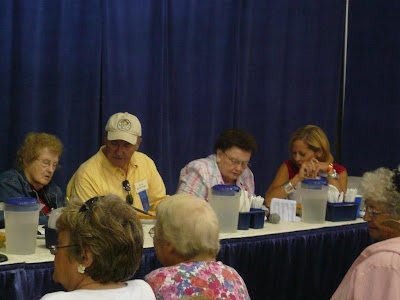 The (hungry) audience watches — and waits — for the verdict. 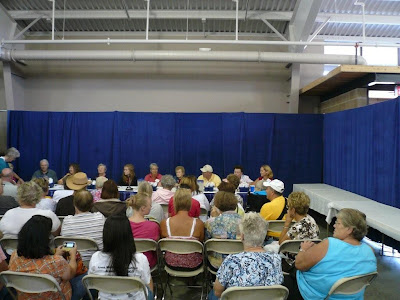 Some pies were decorative…. 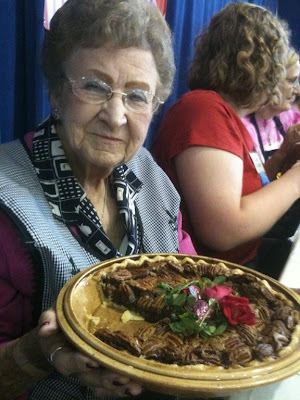 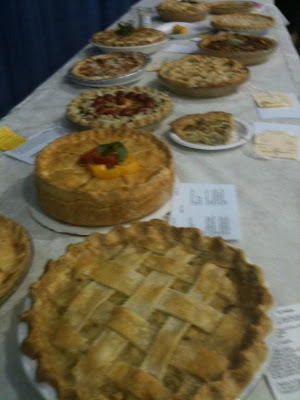 Most of them — like the French Silk below — were sweet…
(This chocolate category was so creamy and delicious that I broke my one or two bite maximum rule and ate and ate and ate until I was buzzing sky high on sugar.) 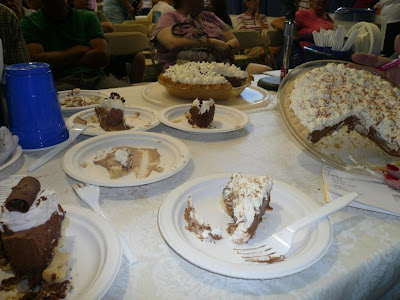 Some pies were classic…. like the apple pie category sponsored by the American Pie Council. Amazingly, the winner of this apple category was a 14-year-old boy! He learned make pie from his grandmother whom he called from his mom’s cell phone immediately upon winning to share the exciting news. 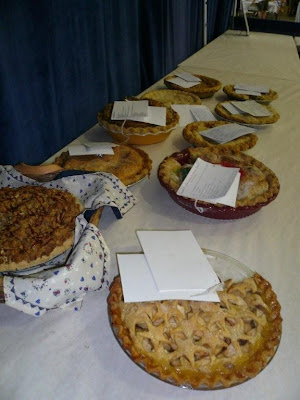 After tasting and tasting and tasting in front of the audience, the judges go behind the curtain for….yes, more tasting! As judges, we all deliberate, making cases for why one is better than another, why it deserves a ribbon, whether or not it is “State Fair ribbon worthy,” and if the recipe could be duplicated by other bakers. It would sometimes take 20 minutes behind stage to ultimately decide on first, second, and third places. 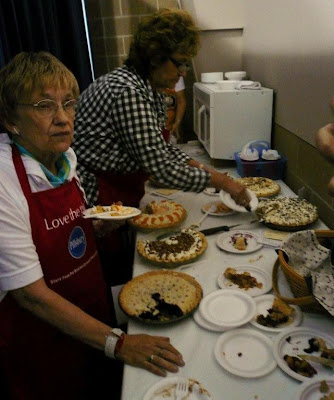 At last! The winners are announced. Below, Dianna Sheehy of Audubon, Iowa reveals to the audience the prize winners. Dianna is a former pie champion herself, the Lance Armstrong of Pie, and “retired” from competition to cross over to the other side, as a judge. The Iowan magazine wrote a beautiful article on her pie baking. I’m hoping to include a stop in Audubon on my Iowa Pie Tour to get some pie tips — and some pie — from her. 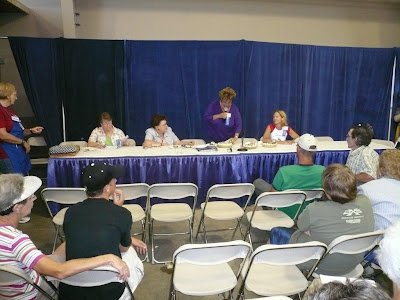 I, too, took my turn with the microphone over the course of the 10 days of competition, announcing pie winners. This one is a strawberry margarita pie made with a Keebler crust. Once again, I broke my two-bite maximum as my fork kept slipping back to the plate for another taste. 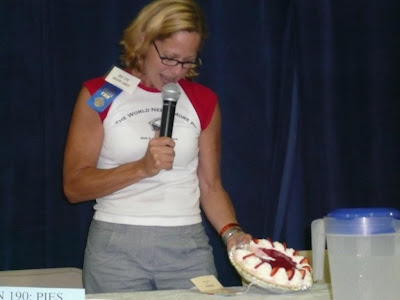 No competition is complete without a victory shot! 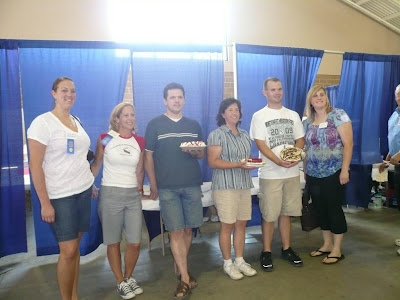 And last but not least, the winning pies were put on display in the Elwell Family Food Center’s showcase. So even if I couldn’t get another taste of my favorite pies I could at least go back and visit them and drool. 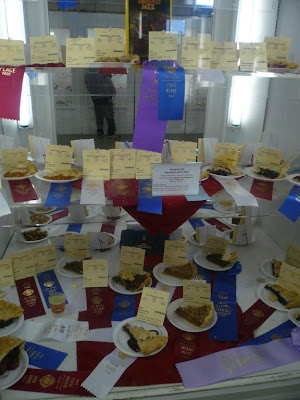 The fair is over now, the pie competitors have all returned to their home kitchens, and I’m about to set forth on the next leg of my journey — touring my beloved home state in search of pie diners, pie bakers, and anything having to do with pie. Considering that one year ago I was planning my 43-year-old husband’s funeral (still unfathomable!), I can honestly say two things: one, pie is good for healing the soul. And two, there really, truly is no place like home.

It’s been so good to be back in Iowa — better yet, eating pie in Iowa. I want to say a big, huge THANK YOU to everyone who made the Iowa State Fair the best place in the world to be this August, a month I had been dreading, but one that turned out to be magical, heart-warming, and, well, let’s face it, a little fattening. But I’m not counting calories, I’m already making plans to come back next year.

1 thought on “Pie Judging at the Iowa State Fair”