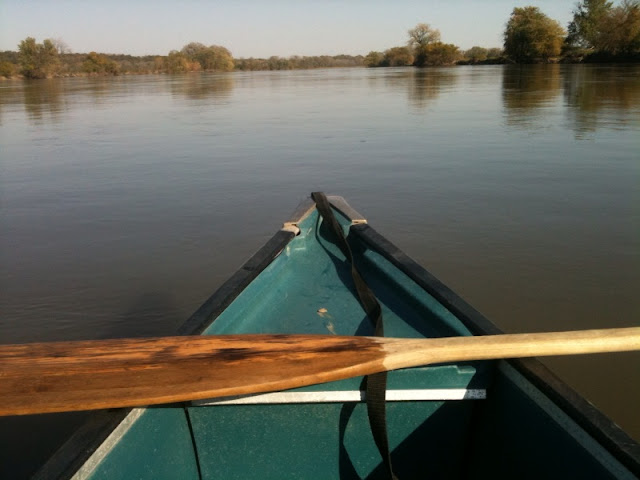 Yesterday I went canoeing on the Des Moines River. I haven’t been canoeing in at least a dozen years. But when my new friend Cari Garrett (not to be confused with Carrie the City Clerk/Xena Princess Warrior) told me she had a canoe and was planning an outing this week I begged her take me along. If living in Iowa again means getting back to my roots, I want to go all the way back, back to my days as a camp counselor when we took end-of-summer two-week trips to the Boundary Waters Canoe Area. Cari promptly followed through with an invitation so yesterday afternoon I rode my bike four blocks from the American Gothic House to the Eldon boat dock where three women and two canoes were waiting.

Cari took the helm of one canoe in which I sat in front. Her friends Connie and Jolene would be in the other canoe. Paddles? Check. Life jackets? Check. Snacks and water? Check. Whisky? Check. (Hey, I thought that was iced tea in your water bottle!) The ladies, dressed in river shoes and shorts, had all their gear packed in waterproof boating bags and mini coolers that clipped onto the canoe stays. I was impressed. They were fully prepared. I was clearly out of boating practice and had tossed my camera, unprotected, into my flimsy backpack and tucked my iPhone into the bib of my overalls without so much as bringing a Ziploc sandwich bag. I hadn’t even thought to wear my Teva sandals. Doh! Still, we weren’t looking at rough waters or rainy weather. The river was high but flat and the October sun was blazing down as if it was still August. We were ready to embark on our five-mile excursion downstream to the next town, Selma, where Jolene had left her truck to shuttle us back to our starting point.

We paddled all of about five strokes into the main channel of the river and that was about as much physical effort as we made for the next three hours. We rafted our canoes together and let the current do the work as we drifted toward our destination.

Lazing in the sun, while herons soared across the water’s surface, we did what women normally do when gathered in a group of two or more: talk and eat.

The ladies broke the seals on the waterproof bags and out came the cheese and sausage, and pop. (Pop is the vernacular for soda or soft drink. I used to say pop until I moved West. I call it soda now, and I rarely drink it anyway. My point is I love the variations in our country’s language.) The women offered me cheese and sausage and I said no, but when they began discussing the savory goods I changed my mind. “I like the mild taste of this,” Connie was saying. “It doesn’t taste like the deer you get in Montana that has a stronger, wild taste.”

“Deer? Really?” I said as Jolene handed me a slice. It looked like regular old summer sausage, the kind you get in those Hickory Farms Christmas gift baskets. It was delicious, not too rich and lightly spiced with jalapeno peppers. I wanted more. “Where can I buy this?” I asked. And they rattled off the name of a butcher at Hastings Meat Market in Bloomfield, a town 20 minutes from Eldon.

Then they talked about the cheese. “This is Longhorn Colby from the Dutchmen’s Store in Cantril.” I knew Dutchman’s. It’s an old style general store that isn’t just old in style, it is old, and it’s run by Mennonites who are also famous for making quality cheese. I didn’t buy cheese when I was introduced to Dutchman’s a few weeks ago – I only bought ribbon from their huge fabric department to use for curtain ties – but I would definitely be buying it next time.

The ladies didn’t have more food samples to try but had plenty of food stories to tell. They discussed buying their organic vegetables at the Amish produce auction on Fridays in Drakesville. “Auction?” I asked. “You bid on vegetables?” I had never heard of such a concept.

“Oh yes,” Connie replied, “they’ll have a big bag of green beans, like a peck or a bushel, and you have to outbid any other bidders to get them.”

“That is fascinating. Do they sell apples?” Connie nodded. “Great. I want to go next time,” I said and pulled out my iPhone. “I’ll mark my calendar.”

Then they talked about their cows and chickens. More specifically their own cows and chickens that had previously lived on their farms and now fill their freezers. “I can’t order a steak when I go out. It just doesn’t taste as good. Same with chicken. The ones you buy in the store have no flavor,” Connie said.

Jolene said, “I bought hamburger meat the other day because I was too lazy to dig our own supply out from the bottom of the freezer – it was buried under all the steaks. I served the hamburger to my husband and he asked, ‘Where did you get this?’ He knew it wasn’t from our cow.”

I was incredulous. I had just moved from Portland, Oregon, a city known for its obsession with pure, hormone-free, locally grown food. Portlanders describe on their menus exactly which farm their produce comes from, how many miles away, and will include minutiae of anything else they can tell you about just how politically correct the stuff is you are being served. Portlanders are not just obsessed with their organic everything but I get the impression they like to think they’ve pioneered the now trendy local-food movement. But here I was in Southeastern Iowa, far from sophisticated city life living in a rural pocket of the country where you’d be hard pressed to find a trend-follower let alone a trend, yet I was surrounded by food snobs!

I LOVED THESE LADIES! They weren’t going to restaurants and paying top dollar for their grass-fed, hormone-free beef. They were butchering their own animals right outside on their lawns! They were buying produce from America’s original food purists, the Amish. They were getting eggs from their chickens who wouldn’t recognize a cage if they walked into one. They were buying cheese made fresh weekly by women in bonnets. They were making their own horseradish from roots they picked and peeled themselves. They were rendering their own lard, boiling down the fat from their pigs to make their pie crusts. My god! You cannot get food any more “local” than all that! Sorry, Portland, but it seems that Iowa had this “trend” wired a long time ago.

One thing was nagging at me though. I had recently read Michael Pollen’s tome, “The Omnivore’s Dilemma,” wherein he – dare I say – picks on Iowa and its corn industry, in particular questioning the reasoning behind feeding corn to cows. (Confession: The book was so dense I couldn’t get past Chapter 3.) I ventured to ask Jolene if she knew that cows weren’t meant to eat corn. She stared at me blankly, which made me wonder if she was unaware of any controversy or simply dismissing the notion altogether. “The cows eat grass AND corn,” she said. “Mostly they eat grass, but we feed them corn to fatten them up before we butcher them.” There was no dilemma for this omnivore and I wasn’t going to question her further.

These women knew a lot more than me about the care and feeding of farm animals, as well as the care and feeding of themselves. These were women who, in the past when short on cash, would go fishing to catch their dinner. These were women who not only knew how to cut off a chicken’s head, they knew how to do it humanely. “You use one of those highway cones and stuff the chicken into until just its head is sticking out, then you take a knife to its throat,” Connie explained. I squirmed and grimaced at her description. “It’s the humane way,” she said. “Their bodies don’t flop around because they’re confined by the cone.”

“Okay, okay, I get it,” I said. “My problem is that I’ve become disconnected from my food and where it comes from. You don’t see blood or a flopping feathered body when you buy packaged chicken from a grocery store. I’d like to learn about this stuff. Let me know next time you’re going to do something. But let’s start with something simple, something that doesn’t involve a chainsaw.” I was referring to the rip in Jolene’s denim shorts which she said came from a slip of her saw while killing a chicken. Though from the grin on her face I think she might have been teasing me. “How about teaching me to make lard for my pies?”

“You know that smell back there?” Jolene said.

“You mean the pig manure?” I asked.

“Yes. That’s how your house will smell when you render lard.”

“Okay then maybe we can start with horseradish.” Cari had brought along a miniature container of the sinus-clearing stuff, so tedious to make and only producing such small amounts that it’s considered a kind of white gold. “At your house,” I added. Cari had been asking Jolene to host another one of her horseradish-making parties, something that, as yet unexplained to me, could only be done in months that end with “er.”

We finally reached the Selma boat ramp (thankfully before anyone suggested passing the whisky bottle around) and paddled hard the last few feet so we didn’t get swept past the landing. We dragged our canoes out of the water and heaved them onto the back of Jolene’s pick-up truck where she strapped them down for the drive back. Girl power. Yeah, baby.

We had had the river all to ourselves. We didn’t see any other boats or people, only birds. And while this afternoon excursion was hardly the Canadian wilderness expeditions of my teen years, it was a nice reminder of how my love for nature and adventure was formed. It was also a reminder of how friendships are formed. I loved spending time with these capable, hard-working, cow-slaughtering women. And whether it involves blood, guts, chainsaws, or manure scent, I am looking forward to our next get-together. I may have returned to my roots, but clearly I have a lot to learn. And luckily I’ve found my teachers.