When you live in the American Gothic House you never know who — or what — is going to turn up on your doorstep. Case in point: yesterday, a group of 15 MINI Coopers, driving in two groups from Des Moines and Cedar Rapids, converged in Eldon, Iowa. Looking like escapees from “The Italian Job,” first they assembled in the American Gothic House Center’s parking lot. They seemed to know the drill. They backed into the parking spaces, bumpers perfectly lined up, and out came the cameras. 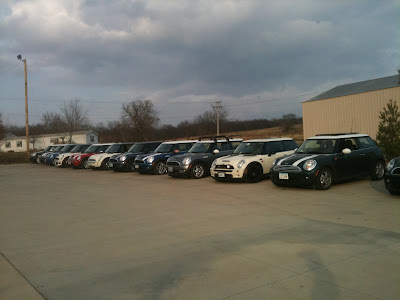 But that was just Phase I. Phase II included lining up the cars in front of the American Gothic House — er, my house — for the “real” shoot. They even brought a ladder to get better shots. 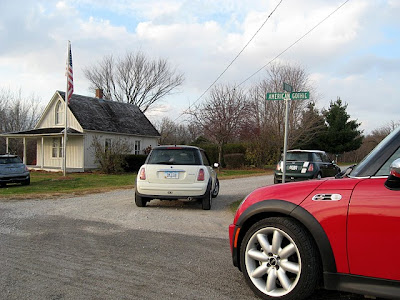 But the drive/photo shoot was really just an excuse. They came for pie. But they had to wait. 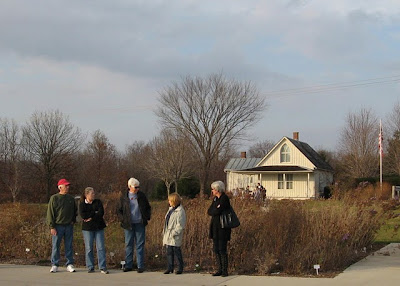 At last, the paparazzi cleared (at least that’s what it felt like), and I opened the doors to the Pitchfork Pie Stand — a.k.a. my living room — and cut into an apple pie. Mmmm, still warm. As you may be able to see in the background (below), the crowd was still snapping photos inside the house. They even took a picture of my brand new oven as if, by virtue of simply being in the kitchen of the American Gothic House, it was a celebrity! 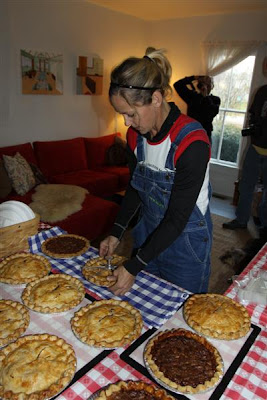 I may have missed out on the group road trip, but my own MINI Cooper was given center stage in the photo shoot. Always one to stand out from the crowd, mine was the only one with a bike rack on the roof. As for my Oregon plates, I wasn’t the only one from out of state. There was another MINI from Virginia, en route to Wisconsin, by way of Iowa. Ending up at the American Gothic House was just another roadside attraction for him. But for me, every day here is a great adventure. Who knows who — or what — will turn up next on my doorstep. I can’t wait to find out.

2 thoughts on “The Day the MINI Coopers Came to Town”