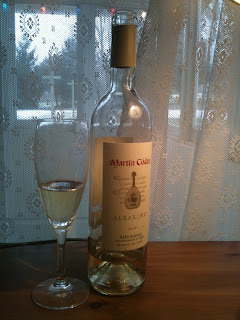 I am drinking a glass of white wine. It’s a varietal called Albariño from Spain. The reason I am drinking this wine is because I don’t have Champagne on hand to celebrate some Very Good News I just received and, as it happened, UPS just delivered this bottle of white wine to my door only minutes earlier. Seeing as it is zero degrees outside, and therefore approximately refrigerator temperature inside the UPS truck, the wine arrived perfectly chilled. And so it is that at 2:30 on an Arctic Iowa afternoon I just opened the bottle of Albariño and am toasting to my news: the sale of my pie show.

A friend of mine in Portland who just took a new PR job sent me the wine. I was her first call. “I thought you might be able to do a story on pairing wine with pie,” she said.

I didn’t laugh at her suggestion, nor did I reply, “That’s a bit of a stretch,” but I could have. I say this because her timing coincided with a recent identity crisis in which I was questioning where I fit into the ever-expanding blogosphere, where food is one of the fastest growing subjects. I may write a blog about pie (which, if you read my blog, you know pie is more a metaphor) but I do not in any way, shape, or form claim to be a food blogger, food writer, or food anything. I bake pie. I teach people how to make pie. I eat pie. Apple is about the only pie in my repertoire, mainly because I can make it without using a recipe. Do you see many recipes on my blog? Exactly. So there you go. A singular love for pie does not a foodie make.

As for the wine pairing, I shop almost exclusively at Aldi, where the wine selection consists of a limited number of budget-priced bottles of Sauvignon Blanc, Chianti, Merlot, a few German varietals I’ve never tried, and Tempranillo, which, like the Albariño wine, is from Spain. You won’t find a bottle of wine at Aldi for more than nine bucks.

Just as I am not particular about what kind of pie I eat – I like all pie! – I am no wine snob. I like all wine! (All wine except for that pink stuff that was popular in the eighties…what was that called, White Zinfandel? And that Concord grape church stuff, Mogen David.) And while I most often drink the everyday bargain stuff from Aldi, I’m equally happy (okay, way beyond happy) to sip a 2003 Shafer Cab or Domaine Drouhin Pinot Noir – as long as someone else is buying.

With my decidedly non-judgmental stance how could I ever be an authority when it comes to wine and pie pairing? The most I could say is all wine goes with all pie. Not exactly the kind of press that would endear my friend to her client and garner her a promotion. The press release she sent with the wine suggests that Albariño might accompany an apple crisp, which is close to apple pie. Well, I don’t have any apple pie – or crisp — on hand so I can’t comment on that, but I do have pumpkin pie in my fridge.

So here’s my scientific approach to wine and pie pairing: I like the Albariño wine, plus I like pumpkin pie. The wine is light and crisp and is the perfect complement to the cinnamon-infused custard of our favorite Thanksgiving dessert. Spain, meet America. America, meet Spain. A match made in pie and wine heaven. There! Done!

As for my Very Good News, you will have to wait more to hear about that. The VP at 3Ball Productions said I was allowed to jump for joy in my living room but not make a public announcement until the contracts are signed. Until then, it’s just me and my glass of substitute Champagne. Cheers!

Albariño (al-ba-ree-nyo) is a white grape varietal grown in the D.O. (Denomination of Origin) of Rías Baixas, located in Galicia on Spain’s Northwest coast. Accounting for 90 percent of all plantings in Rías Baixas, Albariño wine has been likened to a Riesling for its minerality and bracing acidity; to a Viognier, because of its fleshiness and peach/apricot character; and to a Pinot Gris for its floral bouquet. Albariño pairs well with seafood dishes, which are indigenous to its seaside region and are highly prized by leading restaurants throughout Spain. Albariño is also one of the few Spanish white grape varieties produced as a varietal wine on its own and designated on labels.

The bottle I am drinking is Martin Codax 2009 Rias Baixas. $12.99/bottle (online) and $16.99 (in stores). Available at grocery stores or http://www.budgetbottle.com/ and http://www.martincodaxwines.com/.

1 thought on “Pie and Wine: Paired or Not, It’s All Good”