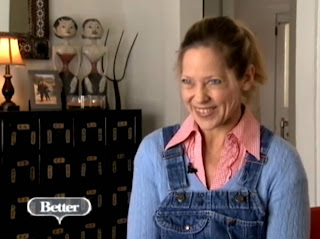 One snowy January day a television crew from BETTER TV showed up at the American Gothic House and wanted to film me making pie. Since I love making pie — even better, teaching others how to make it — I said, “Sure.”

I showed them a few of my shortcuts, the ones I learned from my pie baking mentor, Mary Spellman, when I worked for her in Malibu. Here are the tips I passed along:

Naturally, this video crew was curious as to how and why I was living in the American Gothic House. I understood their surprise. For one, you wouldn’t think anyone would actually be living in an international tourist attraction. It would be like living inside, say, the Statue of Liberty. But many don’t even know of the American Gothic House’s existence. So I explained –with their camera rolling — how and why I came to live here, in rural Iowa. I told them about Marcus dying, and how this house has been so good for me in this segment:

Both of these segments aired on BETTER TV on February 23. They will re-air on March 23. Check your local listings for TV times.

5 thoughts on “My Apple Pie Shortcuts, As Seen on Better TV”