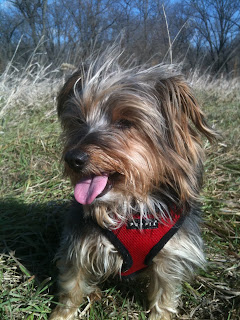 Hi. My name is Jack Iken. I’m seven years old. I’m half Jack Russell terrier, half Yorkshire terrier. I like playing stick, I like belly rubs, and I really like grilled meat, especially filet mignon.

I’m blogging for my mom today because she doesn’t feel good. She was going to take the weekend off and go on a mini-vacation. She said something about wanting to take a break from the “fishbowl,” but I’m not sure what that means because we don’t have any fish. She even closed the pie stand for the whole weekend, which was a big deal because people like to come here and buy her pies. (I like it when people come to buy pie because sometimes they’ll throw the stick for me and rub my belly.) But on Saturday, my mom woke up with a sore throat and a cough so we had to stay home. I was disappointed because when we go on trips she always takes us someplace fun. Lately we’ve been finding lakes where we can hike and swim. (I like swimming, especially if it involves going after a stick.) However, I didn’t mind staying home because she put a mattress on the office floor where it’s cooler, turned on the air conditioning, and we got to nap all day. And Daisy (my sister) and I really like napping. But we like napping even more when our mom is in bed with us.

Mostly she slept, but she cried a lot too and said to me a few times, “I miss your dad.” She was sad because his birthday was yesterday, July 2nd. He would have been 45 in people years. That’s 315 in dog years. I wonder how much it is in spirit years. That’s what my mom says he is now: a spirit. I think that means like a ghost, but a good ghost. (I’m not scared of ghosts, but I am scared of fireworks. So I’m glad we stayed home where it’s safe from all those explosions outside.) 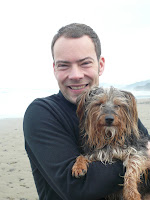 I don’t tell my mom, because I don’t want to make her feel even sadder, but I miss my dad too. He was a really good dad and a really good stick thrower. One of the things I miss the most is when he came home from work every night and took off his shoes, he let me pull off his socks, like tug o’ war, and when I would get one off I would run all over the house with it and he would chase me. Then I would get tired of running and pull off the other one and he would chase me again. I really miss that. He was the best dad. He bought me cool stuff, like the Chuck It ball thrower and a ‘Life is Good’ collar. And when we lived in Portland, where it rains all the time, he bought me a really nice fleece-lined raincoat. My dad – his name was Marcus Iken, that’s where I got my last name – he also liked to grill and he always saved me a piece of steak. That’s how I learned that I like filet mignon so much.

My mom just bought a new grill so hopefully she will cook some steaks when she feels better. That is, if she doesn’t stay mad at me, maybe I’ll get some steak treats. I got in trouble from her yesterday – I was in so much trouble I got yelled at really loud and even made my mom cry — because I went into the neighbor’s yard and I’m not supposed to go over there. What made it bad is that I didn’t come back when I was called, and I was gone a lot longer than usual. She says she called me like 20 times, but I didn’t hear her, I swear. Those neighbors took pictures of me last time I was in their yard. They were Polaroid pictures and in them I was circled and labeled “the black dog.” (Daisy was in some pictures too, they called her “the white dog.”) These neighbors are so against having dogs on their grass they showed our pictures at the city council meeting. I think they wanted me to go to jail or something.

The city council people didn’t do anything about it, and I made friends with the sheriff a long time ago, so now the neighbors are trying to find another way to keep me out of their yard. My mom is afraid they might try to shoot me or poison me or trap me in a cage and she is really scared I could get killed over there. That seems silly. There are bunnies to chase! And squirrels! The way I see it, Daisy and I are doing the neighbors a favor by chasing other animals out of their yard and keeping the vegetables in their garden safe.

But me getting in trouble added another reason my mom was upset yesterday, on my dad’s birthday, and when she was sick. I was very sorry and tried to lick her face to tell her I promise to try harder next time to listen and come when I’m called.

I hope she gets better soon because this writing a blog thing is hard work and it takes time. I’m ready for another nap. If you ever come to the American Gothic House and you see me in the front yard, my name is Jack Iken. I’m the black dog. Daisy is the white one. I like playing stick. I like having my belly rubbed.