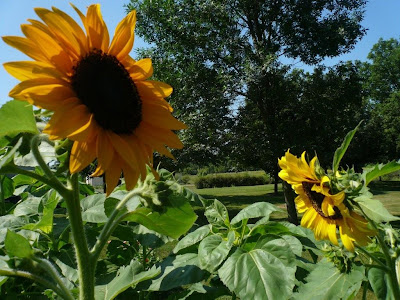 Two months is all it took for my garden to go from seed to full bloom. What I expected to be a gradual process, one that would require a test of patience (a quality I’ve been known to lack), turned out to be more instantaneous. Almost freakishly so. I was especially blown away by the lightning-speed growth when my neighbor Don came over to check on my zucchini last week.

“You just checked them two days ago and they weren’t even close to being ready to pick,” I said, wondering why he had come back so soon.

Dressed in his overalls and straw hat, he bent over and pulled the large leaves aside. I squatted down next to him.

“Well, they’re ready now,” he said. I craned my neck to see what he was looking at and saw the vegetables were at least ten times the size they had been only 48 hours earlier.

He laughed and showed me how to grab a hold of the zucchini at its point of attachment and twist to pull it off — much the same way I pick ticks off my dogs, a daily chore. We picked four zucchini that must have weighed a pound each. I sent two home with him. I also picked green beans for him, my fourth “crop” so far.

“These beans are really good cooked with bacon,” he told me.

“No, Don,” I replied, shaking my head at him. “No bacon and no butter. Just steam them. You can be my gardening coach and I’m going to be your health coach.”

After he left I rooted around the rest of the garden, looking to see what other monstrous growth might be lurking under the large leaves. 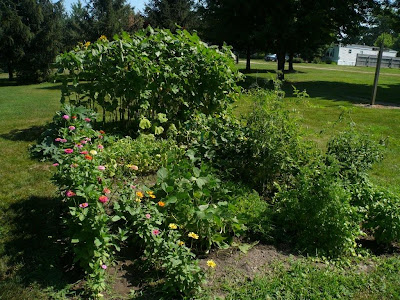 Cucumbers were ready to pick… 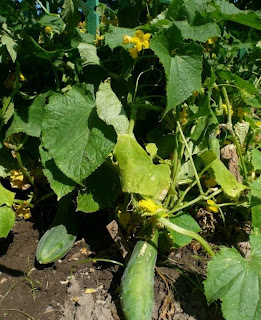 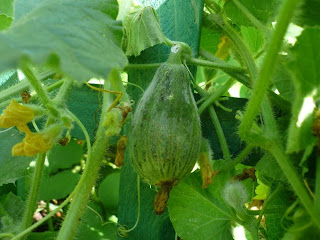 But the cantaloupe was not. Still, I was amazed to see the beginnings of what promises to be delicious fruit. 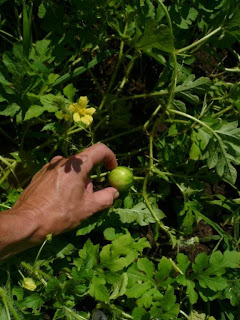 I laughed out loud when I discovered the baby watermelon. I’ve never grown watermelon before — that would be impossible since I’ve never had a garden before — and I’ve never even seen a watermelon patch. But now I have my own and I can marvel at how this miniature little ball will soon become a giant one, filled with juicy red flesh. I cannot wait for the day I sink my teeth into that first home-grown slice!

And let’s not forget this all-important investment in my pie future: the pumpkin patch! Look at that little tiny thing that will one day be orange and end up as cinnamon-spiced custard in a crust. 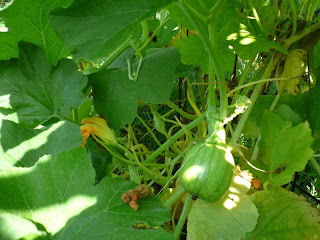 One lesson I’ve learned about gardening is that squash — the cantaloupe, watermelon, zucchini, cucumbers, and pumpkin — needs a lot of space. A lot more space than I gave any of it.

Alas, no need to fret over the tangle of vines that were crowding and strangling each other in the garden, spilling out onto my lawn, and growing their way over toward the clothesline. I may be a novice gardener but I am a decent problem solver. I got some cattle fencing — a heavy duty metal grate — secured it to some stakes I pounded in the ground and made the pumpkin vines grow vertically. These are sugar pumpkins, which won’t grow nearly as big as jack-o-lanterns, so they should be able to hang instead of being supported by the ground. This worked so well, I employed the same technique for the cucumbers and cantaloupe, whose vines were also growing askew. I’m happy to report all veggies are doing well climbing high up their new fences. 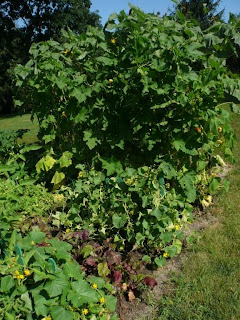 But what about me? all this explosive garden growth makes me ask. How much have I grown in the past two months? While all these innocuous looking seeds have transformed into edible bounty, how has my own life transformed? How does one measure one’s own growth when it is not always outwardly visible in the way a sunflower reaches for the sunlight, rising taller and taller, until its bright yellow petals unfold and reveal themselves?

After giving this some thought and mulling over all the activities of the past ten weeks — running the pie stand, managing the steady stream of house guests, doing two rounds of edits on my book, getting a new kitchen sink and counter installed, battling bronchitis, having a birthday, teaching pie classes, and, oh, making that noble but ill-fated attempt at dating again — when has there been time for personal growth?! Most days my life feels like the tangled chaos of my squash vines. If only I had one of those cattle fences to organize and contain my unruly stems, something to hang onto that allows me to grow upward. Or maybe I am more like the carrots and the beets — scruffy green leaves on the outside, but inside my roots are simply burrowing deeper in the ground, and I am growing, slowly but steadily, in my own unseeable way. It’s a longer and more difficult process to expand and grow in this underground, dirt-moving way. It’s the kind of growth that requires patience. Oh, right.

Until that self-realization is unearthed, I will continue to enjoy the harvest and reap the benefits of my spinach, lettuce, tomatoes, basil and the many other healthy greens that are sustaining me this summer. I will continue to check the garden each morning with excitement and anticipation — and holding my breath that I don’t wake up to zucchini the size of my Mini Cooper. You laugh. But at this current growth rate, anything is possible.

3 thoughts on “My Garden at Two Months”