My boyfriend left town, but not to worry. I don’t need no stinkin’ man to keep me warm. How is that, you ask? Because someone else has already moved into the American Gothic House. He’s strong, solid, heavy, hardworking and black. And, oh baby, he is hot.

“He” is a Vermont Castings gas stove. 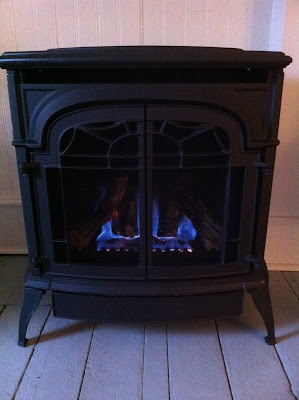 In the same way that Kohler was excited about putting in a new-but-made-to-look-old cast iron apron-front sink in my kitchen, Vermont Castings jumped at the chance to install one of their stoves. And I jumped back because I had been lamenting ever since I moved into the Gothic House a year and a half ago that what this house really needs is a fireplace or a wood burning stove. That’s how the house was originally heated, back in 1882, though the chimney has long since been sealed. But hey, I’ll take gas. No problem.

One little catch (two if you count having to ask my landlord for permission) is that they had to drill a little hole in the original wood plank floor of the house to run a gas line up from the basement. To watch them removing the inch-wide round plug of wood — a piece of American history! — made my hackles go up. They might has well have been using white-out on the Declaration of Independence. Or giving the Statue of Liberty a nose job. (Though as far as I know, both of things might have actually been done.) But once the blue and yellow flames sprung to life and the heat started permeating the drafty old house, I didn’t give another thought to tampering with a national historic site.

Vermont Castings sent their Stardance model, the smaller of their vent-free stoves. Short and squatty, black iron with a dull finish, it looks so authentically old it might as well have come straight off the set from “Little House on the Prairie.” Except that it’s brand new. And it runs on gas. And it heats my house to the point it feels like the tropics. I function best in 80 degree weather. 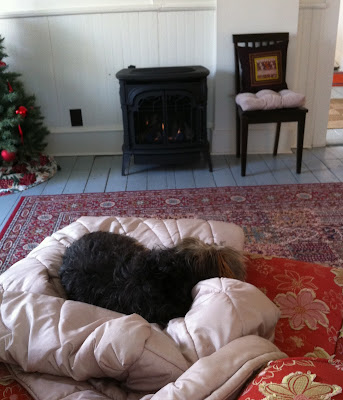 With my new stove, my fingers don’t get cold when I type at my computer for hours on end. And it gets so hot upstairs in my bedroom, I don’t miss having a man next to me. (Okay, I admit, that’s not completely true.) I’ve also noticed my two terriers are spending more time in my office with me, taking longer naps. In front of the stove.

Bring on the winter, I say. It may be a long one, but at least it’s going to be a cozy one.

1 thought on “All I Need to Keep Me Warm”