Marcus has been gone two and half years. I have done the work. The counseling. The crying. The pie baking. During that year in Portland I conditioned myself to being back in a city loaded with so many memories—the good, the bad, the sad memories—of Marcus. So coming back for a brief visit, I thought I would be fine. I was not. I hadn’t planned for situations like the fact that the adorable bookstore, Broadway Books, where I did one of my events, was across the street from the Zeller Chapel of the Roses funeral home where Marcus’s Portland service was held.
And so the aches in the joints, the muscles—especially in the heart—and the cough began. Grief had firmly established itself as a passenger on the tour.
My cough worsened when my RV book tour moved north to Seattle. In Seattle I was not immune to memories of Marcus. Seattle is where I lived when our courtship began. Marcus’s job brought him to Portland for weeks at a time so he spent his weekends with me in my cozy, romantic logger’s cabin in the woods, just 15 miles from where I was working at MSN.com. And because Europeans get such generous vacations, he spent an entire month with me there once. Driving around Seattle in The Beast to my book events and TV appearances took me right past the restaurants where Marcus and I had eaten, the movie theaters where we’d seen films, the coffee houses where we’d lingered and talked and fallen deeper in love.
And so the cough grew deeper still.
As I headed south for San Francisco, relieved I would be free from the memories that were wearing me down, believing grief would stay behind in the Pacific Northwest, I drove past snow-covered Mount Shasta and finally parked in Mill Valley, California. But I couldn’t escape grief there either. Marcus and I had done this drive from Oregon to Northern California together several times. How could I have forgotten? And why couldn’t I just savor the beautiful memories instead of wallowing in sadness? Why couldn’t I be excited that I was on a book tour? A BOOK TOUR! I have always dreamed of being a published author. And now I was out on a cross-country adventure, promoting my book. My published book. My book about my dead husband.
Dubbed by my publisher as “Beth Howard’s Pie Across the Nation RV Book Tour,” I now privately renamed it “Beth Howard’s Retracing her Life with Marcus RV Grief Tour.”
By the time I reached Los Angeles I was on my third bottle of cough medicine. I finally got a prescription for antibiotics, managed to make it through all but one of my scheduled events, plus more TV appearances, without hacking my lungs out in public, and kept plugging along. Don’t think I was immune to grief in LA either. Marcus and I spent a lot of time in Southern California together. But being in the sun and warmth, and staying with my parents (who relocated to the beach from Iowa ten years ago), provided a temporary salve. But only temporary as I had to move on to San Diego for a few days, where I spent a day signing books at a farmers market, did another pie demo on live TV, and taught a pie class.
Bronchitis is a tenacious bastard. I was still coughing when I took the red-eye flight to Florida, to go to the National Pie Championships. Luckily I wasn’t judging pie this year. I wouldn’t have been able to taste much of anything with all that mucous in the back of my throat. But I did have to give a speech and pie demo at the Great American Pie Festival, the NPC’s joint event. (Side note here: If you read my book then let me just say, I was VERY well behaved in Orlando this time. When I wasn’t doing my work, I was too sick to leave my room!)
The trip to Orlando didn’t add to the grief, but it added to my exhaustion. When you’re sick, you’re supposed to rest. When you’re on a book tour, well, too bad. The show must go on.
I was in Florida for three days, after which I flew back to San Diego where I picked up my dogs from the dog sitter, got back in the RV, and drove straight back to my parents’ apartment. I had a few days’ grace period with nothing scheduled—except a long drive to Austin. Thoroughly depleted by this time, I postponed my Texas departure and parked The Beast at the beach so I could sleep. Except that the first night back, at 2:00 in the morning, I wasn’t sleeping. I was writhing in pain. The muscles in my neck and head and shoulders were seized up so severely I couldn’t swallow, I couldn’t move, I couldn’t breathe.
If you know me then you know I don’t run to the doctor when I’m sick. I figure I can muscle my way through anything, tough it out, and whatever it is it will go away eventually. And having been an extreme athlete, I have an exceptionally high tolerance for pain. But this time, at 2:00 a.m., I woke up my parents and cried out the words I have never said before: “I need to go to the hospital.”
Some fun this book tour was turning out to be. 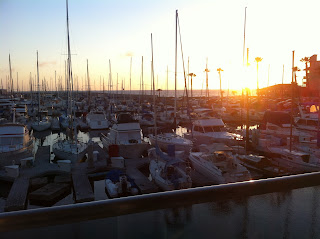 My parents moved to a new apartment in Redondo Beach less than a year ago, so my trip to the ER was new territory for them too. How to find one? One of the most useful things I’ve learned on this book tour is how to use my location services/map search on my iPhone. Three miles to the Little Company of Mary Hospital in Torrance. We were quickly on our way.
Both my parents came with me and waited, one sitting on each side of me. I’m almost 50 and here I was, feeling like I was eight again. Comforting, yes, but even their loving support didn’t take the pain in my head and neck away. I was worried about what was wrong with me. Infection from the lingering bronchitis? Pneumonia? Meningitis? Brain tumor? The swelling in my neck was so extreme I thought it might cut off my airways completely. But at least, now, if I did keel over I would get tended to immediately. (If I had come in bleeding profusely from the head or if I had been escorted into the ER in hand cuffs, I would have gotten even more immediate attention. Or, if like Marcus, I had come in via ambulance through the back door, well… Oh, so you see, grief found me again! In the ER. And hung out there with me all night.)
I was finally seen by a doctor—Dr. Gentle Hands, I’ll call him—a kind and compassionate man whose wisdom and impeccable bedside manner made me think if I could only just get a hug from his teddy bear body that alone might cure me. He ordered chest and neck X-rays, pumped muscle relaxants and pain killers into my veins through an IV, and finally sent me home. At 8:30AM. 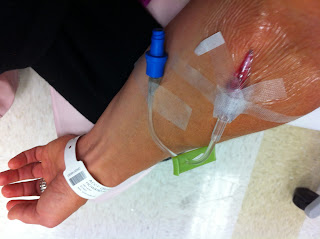 I went back to the RV and slept, still in pain, for the next two days.
Dr. GH called a few days later. He wanted me to come back to the hospital. Huh?! What ER doctor ever calls a patient to come back in to the ER? He had already pre-arranged for me to see the daytime doctor on call so I wouldn’t have to wait. And he had ordered a CT scan. Now I was really scared. I didn’t have a fever, so it wasn’t meningitis. I didn’t have trauma to the neck, so it wasn’t a spinal injury (even though Ari’s suitcase fell on my head during Week Three of the book tour when driving from Seattle to San Francisco. California roads are so riddled with potholes that the bag dislodged and tumbled down from the bunk above me. Luckily I wasn’t the one driving.) X-rays showed my lungs were clear, so it wasn’t pneumonia. It must be a brain tumor.
My parents dutifully, lovingly, unhesitatingly both came with me again.
Back in the ER, my new doctor—Dr. Dark and Handsome—was so good looking it was hard to focus on what he was saying instead of on his dark curly hair, his shadow of a beard, his dreamy brown eyes and his fit body. What was he saying? Something about acute inflammation, tendonitis, probably brought on by the coughing from the bronchitis, lack of rest and that (damn) red-eye flight to Florida. I snapped out of fuzzy romance dream scene when he finally said, “But let’s wait and see what the CT scan results show.” And then he left us.
While we were waiting in hallway chairs (no lying on gurney for me this time) for the results of the CT scan, a priest approached, making a bee line for us. “Oh no! He’s coming to talk to us,” I said to my mom. “This isn’t good.” But my mom, who has worked for the Catholic church for many years, didn’t consider he might be there to read me my Last Rites. She struck up a friendly conversation with him, chatting with him about priests they knew in common. I excused myself and took a phone call I had been told I might be getting. It was from a Today Show producer. When you are trying to promote a new book, you take the call from the Today Show. No matter what. Even when you are sitting in an ER with an IV attached to your arm dripping electrolytes into your broken down, dehydrated body.
Dr. DH returned to give us the results of the CT scan. No brain tumor! The diagnosis was something I still don’t quite comprehend: calcific tendonitis—which is something like calcified fragments lodged in a tendon that get inflamed and eventually ruptures, the rupture being excruciatingly painful but it’s when the relief finally comes. “Is that like passing a kidney stone in your neck?” I asked. Uh, not really. He prescribed prednisone and sent me on my way.
After that whole ordeal, I am finally continuing on the RV Book Tour today, heading 1,400 miles east to Austin. I found someone to help me with the 21-hour drive in The Beast, a longtime Facebook friend named Paul Szendrey. And while I know grief will still come along for this leg of the trip—it’s a trip Marcus and I made together, with the RV, when we moved to Mexico and back—I am looking forward to getting on my way.
I’ve met so many kind, caring and interesting people during this grand adventure. I’ve been so welcomed in every city at every event, had such glowing reviews about my book with such huge press, had such nice emails from people thanking me for sharing my story. I’m sure the adventure will continue, in some new form, but for now it’s time to turn the RV around and travel back east.
I am looking forward to returning to the nurturing, grounding sanctuary, I have created for myself in the American Gothic House. It’s a place where I can breathe freely and my lungs don’t hold anything but the fresh, wide open, fertile farmland air.
NOTE:  If you are in Austin, please join me at my next book event at BookPeople on Tuesday, May 8,at 7PM. Free pie will be served. And I promise I won’t cough.