I am sitting in the back of the RV while my friend from Dallas, Nancy Moffat, is driving. What a luxury! Not to mention, she is a superb driver which is why I feel relaxed enough to hang out in the back and write (and not be a backseat driver!)

I am on Day 8 of the RV Book Tour for my new cookbook, “Ms. American Pie.” While I technically started the book tour in San Francisco at Omnivore Books on Friday, April 11, I didn’t set out in the RV until last Monday, as the RV was parked in Pasadena. My first stop on the cross-country route — heading from California back to the American Gothic House in Iowa — was Phoenix, where we first parked at the downtown “hacienda” of Christina Fitzgerald.

Christina was featured in my memoir, “Making Piece,” as I wrote about how I spent the first New Year’s Eve after Marcus died. Getting through those first holidays was a challenge, but as Christina is a widow herself, her sweet company and her gorgeous, art-filled house made it not only bearable but fun. I was so glad to see her again, four years later. Her hospitality and house were as wonderful as ever.

I had two TV appearances and a pie class to teach my first day in Phoenix. The class was a special one in that a longtime Facebook fan, Lorrie Rockwell, offered the kitchen space in the Hospice Center where she works. Two ovens and six tables provided the perfect venue. But the evening wasn’t really about the pie. It never is. It was about the fellowship and new friends that came out of the experience. Besides Lorrie, who was so gracious and welcoming (and pretty!), there were two women I met on RAGBRAI last summer. I had escaped from my pie stand responsibilities for two days last July to join in the “Register’s Annual Great Bike Ride Across Iowa.” While pedaling along with the tens of thousands of other cyclists I rode behind a woman, a strong rider, who every time she came upon those grooves in the pavement that warn drivers of a stop sign, she called out to those behind her, “RUMBLE STRIPS!!!!” I ran into her at a roadside watermelon stand later and I recognized her. “Oh, hi. I know you. You’re Rumble Strips,” I teased. We struck up a conversation — her name is Candace — and then met her friend Martha who she was with. I learned they were from Phoenix. We traded contact info and when I knew I was going to be in Phoenix on my book tour I invited Candace and Martha to come to the class. And they did. What a surprising and special connection!

Also at the class were the two sisters of my best friend in the universe, Nan. Nan and I grew up in Iowa and have been friends since age 12. Nan lives in NYC, but her sisters, Chris and Kathy live in Making Piece,” I wrote about staying at Kathy’s five-star hotel — I mean, house — and how I parked the RV in its circular driveway overlooking the desert landscape (more green than brown in this area) and the distant city lights. It was so luxurious the first time, I was happy to return. This time Kathy and her husband Chuck were home. And this time the RV sat in her driveway emblazoned with decals reading “Pie Across the Nation.” “The neighbors are all going to come over asking for pie,” Kathy said.

Phoenix. Kathy lives in Paradise Valley with a view of the famous Camelback rock formation. In “

Nancy, who is still driving as I write this, had flown to Phoenix to join me on the book tour until Dallas. She stayed with me at Kathy and Chuck’s and among every other detail that needs attending to while driving cross country on a book tour (walking & feeding Team Terrier, washing dishes, pumping gas), she helped me make pies for the bookstore event I was doing at Changing Hands. We tried not to make too much of a mess in Kathy’s kitchen and while the pies were baking in the oven, we dipped in and out of the infinity pool. Oh yes, life on the road can be very, very good!

Changing Hands is a big, bountiful and successful independent bookstore in Tempe. It’s one of those bookstores that does such a good job with their book displays (and gift displays) that you want to buy everything! I was warmly greeted by Cindy Dach (who has been very busy lately preparing to open their second location) and Eddie, who was my host for the event. We served free pie — as I do at all my events — and included in the pie offerings were Candace’s and Kathy’s apple pies from the previous night’s class. (Thank you both! Your pies were not only appreciated, they were devoured!) I had a packed audience (I love having all that energy in the room) and sold out of books (such a good problem for an author to have!) I also had some surprise visitors — some long-lost relatives. My dad’s cousin, Delores, and her two daughters were there. Bright and beaming people, I wished I had time to spend with them and get to know them. But such is the nature of a book tour. I had a long line of people waiting for their books to be signed, and then one is always rushing to the next stop. 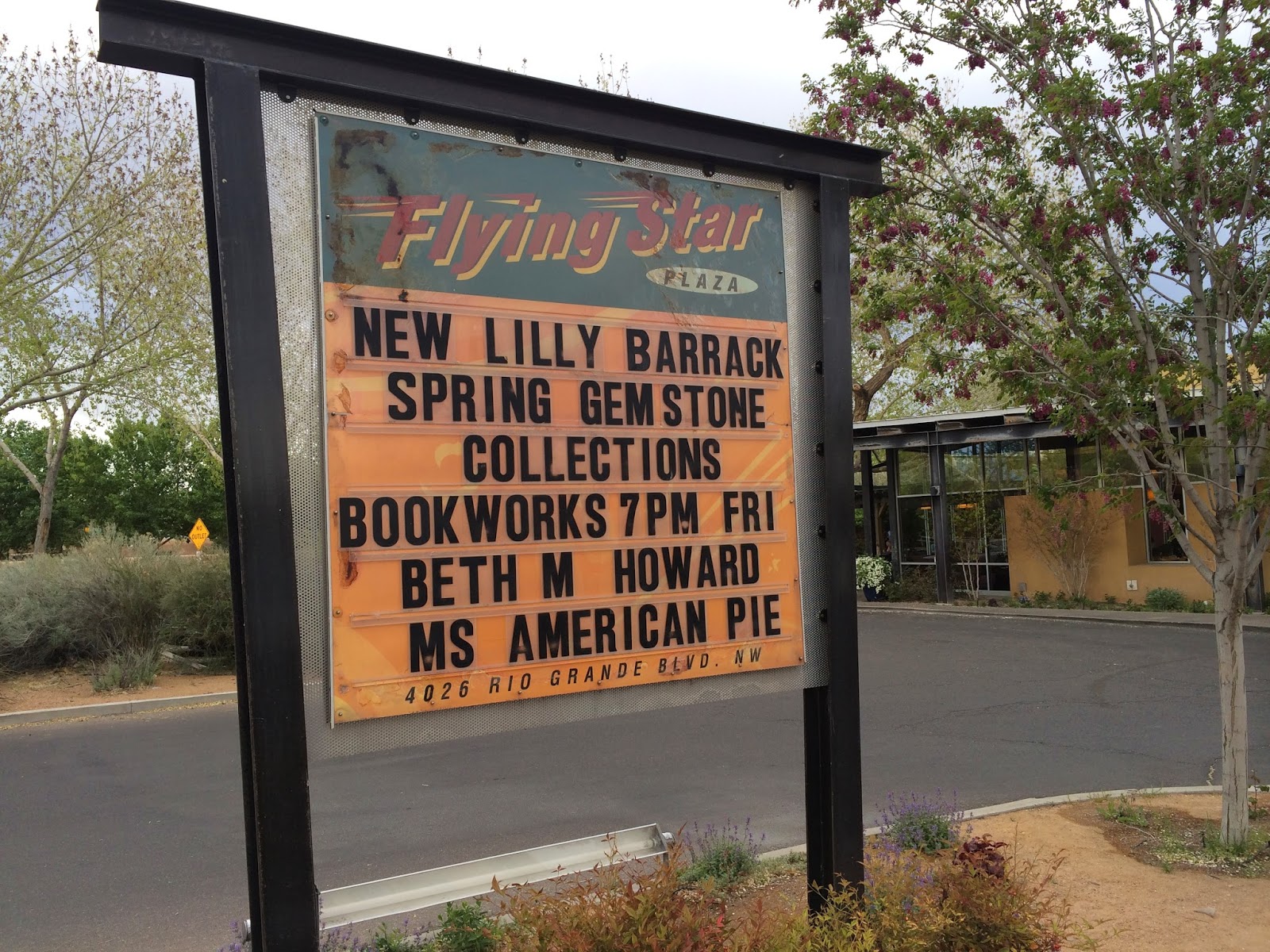 That next stop was Albuquerque, New Mexico. I’ve never been to Albuquerque and all I knew about it was that we should at least see Old Town. So we took the designated exit off of I-40, drove a few blocks, and parked on a quiet section of Rio Grande Street where it dead-ends at a golf course. The beauty of traveling in an RV is that you are self-contained. You can run your interior lights off a battery, your refrigerator off propane, and you have your bed in the back, so you can park anywhere (where it’s allowed) and sleep for the night. We had pulled up across from a bed & breakfast and in front of a tidy brick house where a man was standing out in his driveway. Rather safe than sorry, I approached the man and asked if it was okay to park there overnight. After he said yes, I said, “Oh, and do you know where we can get a good margarita?”

My dogs were standing there with me and his dog was inside barking so he said, “Let me have my wife bring our dog out.” That’s how we met Bob, Dorothy, and their dog Weston. Dorothy came out to the RV the next morning and asked if we needed anything, if we needed to use the bathroom, or needed her to direct us to the TV station where I was going to talk about my book. She was so nice, so friendly, so much fun to talk to, we brought her with us to the TV station, had lunch with her afterward (she knew of a good place called Flying Star Café — and it was good!), walked the dogs with her in the afternoon, brought her with us to the evening bookstore event I did at Bookworks, and had a post-event drink with her before calling it a day. It felt like we had known her forever and that she was an integral part of Team Pie. We wanted to kidnap her and bring her with us.

While it’s hard to leave each place, and even harder to say goodbye to old — and new — friends, there is always something exciting just down the road. We are about to arrive in Austin (I’m doing a pie demo and book signing tonight at Barnes & Noble) and we will then be off to Dallas tomorrow (where I will have to say goodbye to Nancy as it’s home for her). After Dallas, I go to McKinney, Texas (come see me at Kitchenwares on the Square, 6pm, Saturday, April 26) and Kansas City (come see me on Monday, April 28 at the Louisburg Library), and finally, I will be home the first of May after being away for 7 long but warm, sunny and action-packed months.

Let the adventures — and the encounters with such lovely, giving, interesting people — continue!

3 thoughts on “RV Book Tour So Far — Phoenix to Austin”