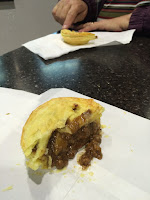 If there is one thing I’ve learned on my World Piece journey so far, it’s that New Zealand loves pie. Kiwis (as New Zealanders are affectionately called) love pie so much it’s sold at every gas station, convenience store, just about everywhere you look. Some consider it a staple and often eat it for “tea,” which is dinner (which in parts of the US is known as supper), others say pie is what you eat when you’re coming home from the bar. On this trip so far, it’s been the go-to food when jet lag makes my stomach growl at odd hours outside of normal meal times.

Hand pies are served warm, the filling is soft and gooey gravy, and the crust is always flaky. And they are almost always savory, salty and hearty. (I don’t even want to know the fat and calorie count!) 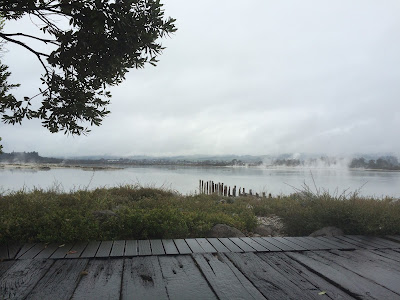 One of my stops was in the town of Rotorua, famous for its hot springs. It’s a crazy thing to see a town built on a lake that looks more like a cauldron. Steam vents puff out columns of smoke all around the town, making for an eerie site, and the underlying concern that the whole place might blow up if the earth decided to let loose.

My NZ host, Grace, and I drove from Auckland to Rotorua on the way to her daughter’s in Napier (Hawke’s Bay) further south. In Rotorua, we stayed at the Ibis Hotel, where the manager rolled out the red carpet for us, upgrading our room to a lake view, throwing in a free breakfast, and then, when he heard about World Piece, he treated us to a free dinner buffet at the Novotel next door. That is some impressive Kiwi hospitality!

The buffet was a good introduction to the local cuisine, mainly fresh shellfish (oysters, mussels, shrimp), lamb shank, and their favorite dessert, a meringue/pudding combo called pavlova. After tasting the New Zealand specialty of Butter Chicken (similar to Tandoori chicken) and LOVING it –and raving about it to the waiter — the chef came out with the recipe. His name is Rikesh and he is half Indian, half Fijian. He hand wrote out the recipe by hand for me and walked me through it, pointing out that he didn’t have numbers or amounts for the ingredients. I told him, “Don’t worry about it. That’s how I bake!”

I’m down in Napier now and I had a butter chicken pie for lunch yesterday. It wouldn’t win any pie contest. I fear Rikesh spoiled me for any other Butter Chicken. Thank goodness I have the recipe. And here it is for you.

Meanwhile, further south, in the stunning and fertile region called Hawke’s Bay, I went to a Sunday farmer’s market.

I walked past all the hand pies for sale and migrated toward the hand carved rolling pins. Made from Tasmanian black wood and from a local New Zealand wood called Rimu, these are made from single pieces of wood. Of course I wanted to buy one, but I still have a whole world to circumnavigate and I am already over the weight limit on my luggage.

At the market I was introduced to a fruit I had never heard of called feijoa. It tastes like a cross between a passion fruit and a kiwi fruit. It’s very perfumy and for that reason is best eaten in smaller doses. For example, when I tasted feijoa juice my reaction was “that’s too much of a good thing.” But forget the juice, you can make pie from this exotic fruit! (Exotic to me. In NZ it’s an everyday fruit that grows in back yards.) 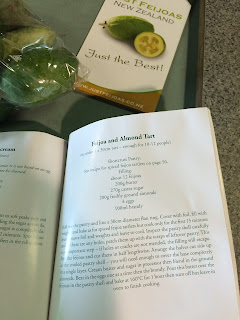 I came across the stall selling mushrooms. And at the stall was a recipe for mushroom pie. 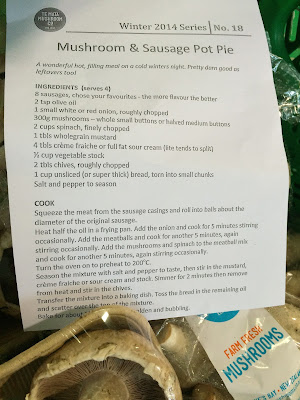 While I was perusing the aisles for pie ingredients, Louise and Grace bought picnic supplies at the farmer’s market. So after the market, Louise drove us on a scenic tour (which wasn’t a stretch considering there is not one corner of NZ that is not scenic!!) and we ended up at Ocean Beach. It tugged at my heart a little to know I was looking straight back across the water to Los Angeles, where I had just left a few days earlier. A baguette, a bag of feijoa fruit and an apple pie-thing (more like a danish) made for a good snack. And the World Piece apron made for a good tablecloth!

Later, while browsing for pie plates at a local home goods store, I had to take a photo of this. The pie dish may look like the kind we use in the US, but when you read the recipe you’ll know you’re in another country. Which is the whole point of this journey. Vivre la difference!

Coming up in my next posts: a tour of The Yummy Fruit Company apple orchards, and the first pie class I’m teaching on my round-the-world trip.