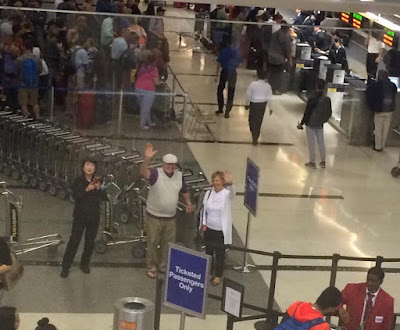 In all my years of traveling internationally, I have never had such a hard time saying goodbye to my parents. They have been driving me to the airport since my first trip overseas 30 years ago. I have always traveled solo and regardless of where I was traveling to — Europe, Thailand, Kenya — I was always excited to leave, not plagued with the worries and fears that weigh me down now, probably because I was too young and naive to know what I should be worried about!

Our goodbye hugs lasted far longer than our usual airport hugs and the tears flowed more readily and much longer. And when the flight to New Zealand hit some turbulence half-way across the Pacific Ocean, I thought, “Well, that’s why we hugged for so long. My plane is destined to go down.”

Silly, silly, girl. What a misuse of imagination.

Apart from the few bumps in the night, the 13-hour flight went very smoothly and surprisingly quickly. (It helps when you have 40 movies to choose from on your private screen.) And not only did we not crash, we had a soft landing, AND we were greeted by a rainbow over Auckland.

My host, Grace Bower, picked me up at the airport and gave me a driving tour of Auckland. The city is on the narrowest part of New Zealand’s north island, an isthmus with harbors on each side.

After zipping around Auckland, Grace drove us north to her village of Orewa. (Pronounced “Oh-ray-wa.”) It’s a quiet little seaside town with a long beach and….lots of pie!

At Grace’s house, or “Christmas Cottage” as she calls it, she couldn’t wait to show me a video she had in her collection. She had just stumbled upon it when cleaning her house for my arrival and thought it might be some divine message. What are the chances that she would pop in an old video and have it turn out to be my old house on the screen? American Gothic was featured on an art program, and almost like an American Gothic parody itself, it was hosted by British nun in full habit. I didn’t read too much into the message. That painting turns up everywhere. Even in Orewa, New Zealand.

Given my jet lag and my utter disorientation (knowing that this is only one stop on my round-the-world trip does kind of rattle the psyche), my stomach was also confused, growling at 3 in the afternoon. But no worries, because we found the quintessential New Zealand meal to fill the hunger. Fish and chips!

I love how the fish and chips were served wrapped in paper. Traditionally they’re served in newspaper. Nowadays it’s served clean paper. Still, no styrofoam. No plastic bags. Tradition aside, this was another sign New Zealand is a very environmentally conscious country. Grace taught me to tear a hole in the top of the paper to let the steam out, to keep the fried food from getting soggy.

The place was takeaway. Carry out. To go. (Funny, all the nuances of the English language.) And given we were one block from the beach, we opted to have a picnic by the sea. But this is New Zealand. In winter. It is sunny for five minutes. Then in rains like hell. Then it’s sunny again. Then another rain shower. Sun. Rain. Sun. Rain. Sun. Rain. It goes on and on like this all day, all night. This climate would make me insane. But Kiwis grow up with this weather. They’re a tough bunch. They don’t seem to even notice the rain. And I saw a few people wearing shorts, even though it was 50 degrees. I didn’t want to seem like a wimp, so I ventured to ask Grace, “Isn’t it too wet to eat outside?”

We had our picnic in the car, parked at the beach, watching the waves like we were at a drive-in movie. We were looking east — toward LA, the place I had just come from. Only 24 hours earlier I had been at my parents’ oceanfront apartment, looking out over the same ocean, looking west, toward this spot where I was now sitting. Eating fish and chips. In the rain. With my new friend Grace, whom, until now, I only knew through Facebook and phone calls.

Utter disorientation? No. Utter marvel. And utter joy. And utter gratitude. I had a warm and loving sendoff from my parents (as well as from other family and friends), a safe flight (speaking of marvels, jet travel still amazes me!), and a warm and loving welcome on the other side of the Pacific. If this is any indication of how the rest of the journey is going to go, I’d say I can put my imagination to better use going forward. No more worries. I’m off to a very good start. Now to go make some pie!