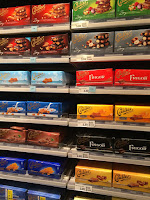 I left off with my blogging (and again, my apologies for not keeping up with it!) in Switzerland, where I arrived on July 29. I landed in the country’s capital of Bern, depleted from a debilitating stomach bug I picked up somewhere between Lebanon and Greece, and stayed with my lifelong friend Uschi Kamer for two weeks. We called her apartment “Kurhaus Kamer” as it really did serve like a true Kurhaus, a medical-spa-like place to recuperate.

Once I got rested enough, I boosted my immune system with exercise, biking around the medieval cobblestoned city, hiking up the Gurten Mountain (2800 ft above sea level) behind Uschi’s apartment to view the Alps, and –my favorite– swimming in the glacial waters of the Aare River, bobbing downstream at a pace faster than a bicycle, only to climb out, walk back upstream, and float down again.

After I weaned myself off my restricted diet of boiled white rice and Gatorade, we ate healthy homemade meals with staples that included Gruyere cheese, chocolate, red wine and apple pie.

We made some day trips to the countryside, to the Jura region on the French border, where we toured castles and cheese factories, lunched on trout, and practiced our French. Tout va bien! We made apple pie at Uschi’s family cabin and invited other family members up to share it.

We made a banana cream pie and took the bike to the train to the bus to the Land Rover to get to Uschi’s friend Monika’s farmhouse where we ate it with lunch. At the farm we got to meet Monika’s animal kingdom, tallying up the count to about 24 between the 3 sheep (freshly sheered by Monika to spin the wool and knit sweaters, of course), 4 new baby goats, cats, dogs, chickens, and turtles. We worked off the pie — and Monika’s homemade apple-hazelnut cake — by hiking up a boulder-strewn river bed.

In between all the outdoor adventures, I took in plenty of Bern’s cultural offerings. Uschi and I spent an evening watching jugglers, musicians, acrobats and other street performers at the Buskers Festivals.

Then I went to a free outdoor concert with another friend, Bobi, and we bumped into an acquaintance of hers, an older woman named Susanne. When I told Susanne I was currently on a round-the-world trip she said, “Oh, I did that. For my 70th birthday.” Just when I was thinking I had overestimated my strength and stamina, wishing I had done this big trip in my 20s or 30s and not at 53, along comes this beaming ray of light who I am convinced was placed in my path to remind me: You are NEVER too old. It is NEVER too late. Get out there and do it. Keep going.

It was the message I needed to hear at exactly that time, because after being so ill, as well as drained from hauling my 50-pound beast of a suitcase from country to country, I was contemplating cutting my trip short. But Susanne’s positive energy gave me the impetus to keep going.

I needed all the motivation I could get, as my next stop was Germany, the place I had been anticipating with a quiet dread. It was the place where my late husband was from, the place we had lived together, the place I had not been back to since his funeral six years earlier. But Marcus’s frequent flyer miles had made my round-the-world trip possible. And I was determined to honor him. And so….I booked my train ticket, left the peace and beauty and healing place of Bern behind and headed north to Deutschland.