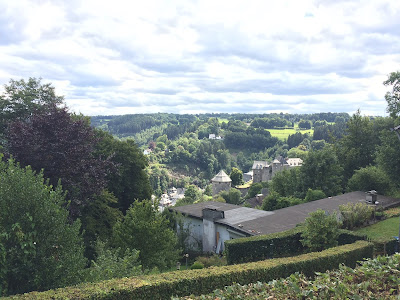 Two months ago today I was in Aachen, Germany. Two months ago today was the six-year anniversary of Marcus’s death. I was in the town of his cousin, Claudia, staying in her home with her husband Edgar and 2 of their 3 kids. I borrowed Claudia’s bicycle and spent August 19 alone, riding on the old railway line-turned long-distance bike path. A sunny but cool summer day, I rode several hours, crisscrossing the Beligium-Germany border as I pedaled along the meandering path. I rode to the town of Monschau where I stopped for an indulgent lunch of spaghetti carbonara, insalata caprese, and a cappuccino. Marcus would have liked that.

I ate in the courtyard of the town square, surrounded by Germany’s signature timber-frame “Fachwerk” buildings. He would have liked that I remembered the word “Fachwerk.” 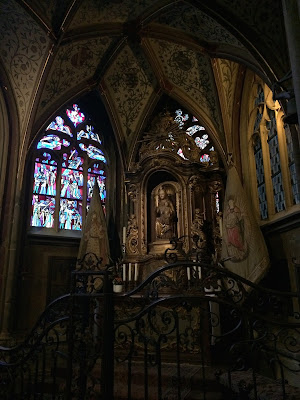 He would have liked that Claudia and I went to the Aachen Cathedral the day before and lit candles for him, admiring the mosaic ceiling with the symbol of the lion, the symbol of courage. He would have liked that I went to the thermal baths in Roetgen where I floated for hours in the warm saltwater pool and sweated in the different saunas and steam rooms there. He would have liked that Claudia and her sister Martina and I drank champagne the night of the 19th. We made a silent toast, but you could hear the collective unspoken words in the clink of the glasses: “To Marcus. Who left us way too soon. The world is a dimmer place without you in it, but here we are, carrying on. Here’s to you, our beloved man.”

He would have liked that I treated Claudia and the family to lunch a few days earlier at Vaipiano, our favorite place when they opened their first location in Frankfurt and the last place we ate together in Stuttgart.

He would have liked that I used his frequent flyer miles to travel around the world in the first place, to make pie, to spread a message of peace and love and community building. He would have liked that my last stop was Germany, that I was channeling lion-like fearlessness and immersing myself in his country, spending time with his family, teaching his cousins and their kids how to make apple pie, looking through our old photos of our wedding and the other German family gatherings. He would have liked that we were there because of him — and to know how deeply he was missed.

When I set off on my World Piece journey, I was determined to dive headfirst into my fears, to go to Germany, teach a pie class in the Black Forest village where we got married, make pie in Stuttgart where we lived, stay with his cousins in Aachen, and last but not least, visit his grave. But I realized that most of those things were too ambitious for a barely healed heart. “Don’t open the wound,” friends cautioned. So my modified version of this — the way the trip actually unfolded — is that I went to the Black Forest, but I stayed in a cabin a few valleys away from where we got married. I did teach pie classes in the Black Forest, but to the kids of our friends instead of the people from our wedding, embracing a new generation, acknowledging the circle of life. I did visit the cousins in Aachen, but I skipped Stuttgart and I did not go to the grave. I have no regrets about taking those last two off the list. As I have always believed, Marcus is not at that grave. He is in the stars, he is in the candlelight inside the church, he is in the sun and wind on the bike path, he is in the beauty of the Fachwerk village, he is in the flavor of the carbonara and the froth of the cappuccino, the bubbles of the champagne, he is in the heat and saltwater of the spa. He is in my heart, all our hearts.

I could have ended my trip after Aachen. It felt like my journey was complete after that. I thought my mission was about pie. But I was wrong. It was about Marcus, about getting closure. It was about going to the place that still held so many memories, the place I hadn’t been since his funeral six years ago. It was about realizing how far I have come since he died, how much he taught me, how much he has supported me even after his death, how the connections to the friends and family we loved together have endured the time and distance and loss, how he is still remembered and admired by those friends and family even after he is gone.

In short, my time in Germany did not open the wound. Instead it was a salve, a true healing potion. I will always carry a scar of losing Marcus, but it’s the scars that make us who we are. The scars are reminders of how fully, how courageously we have lived. You’d be hard pressed to find a lion without scars.

After Germany I went to Budapest — that story will be my next post — before flying back to Los Angeles where I was reunited with my parents. And finally, on September 1, I flew back to Iowa to be reunited with my dog, Jack.

Jack had been staying all summer on the farm of my friend Doug — or at “Camp Doug” as it has now beed dubbed after I started telling everyone my dog was at “summer camp.” And now for the big plot twist in the story. Instead of picking up the dog and moving on, I have stayed. I have come to a rest in the tranquility of the Iowa countryside, living in a farmhouse—with the farmer who owns it. My life has taken a big turn, my heart has opened back up, and I’m spending my days—and nights—with Doug. I could not have guessed two months ago, while riding Claudia’s bike through the German countryside, that my World Piece trip—and my tribute to Marcus—was really just the process of making room for this new beginning. I think Marcus would like that.