This past summer I left my home in Donnellson, Iowa and traveled all the way around the world, baking American pie in 10 countries as a way to promote cultural tolerance. I returned with the intention of writing a book about my experience. I already had the title: World Piece, spelled p-i-e-c-e.  But it is hard to write about world peace when you’ve lost your faith in it. 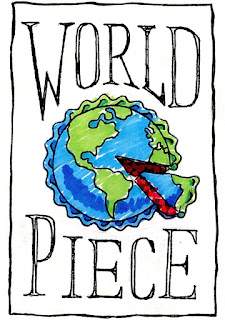 My trip went well enough. I toured apple orchards in New Zealand. I did a pie demo for the Women’s International Club in Sydney. I baked 75 pies for the American Embassy’s 4th of July reception in Thailand. I learned how to make pie-like pastries in India. I delivered a dozen pies to a Syrian refugee camp in Lebanon. I picked wild blueberries in the Black Forest to make pie with 10-year-olds, and then with a gay couple in Budapest’s bombed out Jewish quarter. I interacted with people all around the globe, weaving my way through a lattice crust of nationalities, religions and races. I made 211 pies and almost as many new friends. I returned safely.

But since I’ve been back, I’ve been listening to a lot of news. Bad news from the places where I had just been. A bombing at the Erawan Shrine in Bangkok, the exact spot where I had made my pies. A growing garbage crisis in Lebanon. The Syrian refugee crisis worsening. Trains halted from Hungary to reject the migrants. Terrorist attacks in Paris, and then Brussels. Instead of spreading world peace, it was as if I had left only violence in my wake. Add to that the vitriol of the presidential campaign with threats to build walls and ban certain religions from entering the U.S., to divide instead of unite people, and any remaining optimism I had for healing the world evaporated.

Lugging that rolling pin for 30,000 miles was all for nothing. Or was it?

In my state of disillusionment, I reached out to my Facebook friends, the ones who had cheered me on during my 3-month journey. I asked them, “Do you believe world peace is possible? How do you define peace and what examples do you see of it? What do you do to try to make the world a better place?”

The responses were plentiful and thoughtful.

Limit exposure to news. Meditate or pray. Spread joy. Practice kindness and tolerance. Teach children to be good citizens. Invest in the education of the next generation. Focus on the good. Live with a soft heart. Dig deeper for awareness and understanding of yourself. Choose to think positively. Help others. Talk to your neighbors. Share a smile. Cooperate with those you don’t agree with. Believe in the ripple effect. (Like pay the bridge toll for the car behind you and see it continue for hours.)

A bike shop owner in Ottumwa said, “Peace is yin and yang because energy is in constant flow. There is goodness and there is anger. Anger has its place, because oftentimes it is what pushes a change for more goodness.”

Some of the comments included links to videos—of the Dalai Lama, a CNN story on the peaceful kingdom of Bhutan, a TED talk. There were also links to organizations, a Dutch one called World Peace is Possible, whose website states, “There was peace for 1 percent of the 3,500 years of civilization, so we know it’s possible.” There is the “I Declare World Peace” hashtag movement on Twitter. There’s “A Peace of my Mind” —p-e-a-c-e— book of photography and interviews. And in LA, there is a man whose Global Vision for Peace non-profit is organizing a LiveAid-type concert to be held on September 21, the annual date the United Nations has established as International Day of Peace.

Humans share 99.9 percent of the same genetic makeup. So why can’t we get along? Why is there not 99.9 percent peace in the world? We may try to be good and do good, hardwired for survival, but we are tribal. We are opinionated, power hungry, fearful and hotheaded, with some more prone than others to strap on an explosive vest and detonate it in the middle of a crowd. Still, I want to believe mankind is basically good. I want to have hope.

One commenter suggested that wanting global piece is too daunting. “You should scale it back,” he said, “and just think about your own world, your own piece of the pie. Each piece put together in harmony can add up to the whole.”

With this in mind, I’ve reimagined my own view of world peace. It is sleeping soundly under my down comforter, next to the man I love, in a country we are blessed to live in. It is doing yoga as the sun rises over the barn. It is walking through the hay field over to the creek to look for wildflowers. It is watching the baby calves nurse on their mothers. It is dropping by my old neighbor’s house after his heart surgery and seeing his face light up at my arrival. It is listening to the stories of two 90-something-year-old sisters in my town, made even sweeter over pie. And it is about community, people connecting with each other, even if just on Facebook, who lend each other a helping hand, restoring their faith in humanity and, in my case, to push them past their writer’s block. 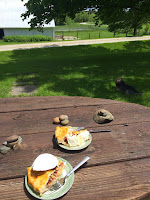 That last commenter was right. It is not about world peace as a whole. It’s about having one little slice of it. And that I have found. Right where I started. On a farm in Iowa.

8 thoughts on “Is World Peace Possible?”