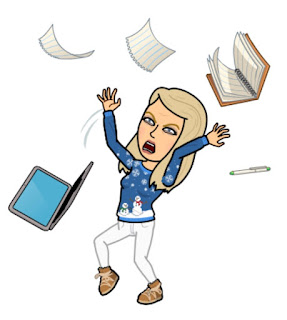 The photo to the left (it’s a Bitmoji) is me. It’s me and it sums up everything I am feeling right now about writing my American Gothic House memoir.

I am trying to get my story down — my whole story — about my four years of misadventures living in a rural Iowa tourist attraction. I made pie (god, did I make pie!)  I fended off snakes and tourists and mean neighbors (who could forget The Binoculars!)  I wrangled the flow of houseguests, pie customers, and media (I never should have said yes to Larry “Git ‘er Done” the Cable Guy).  I made new friends–of all ages and backgrounds (think bib overalls, pickup trucks, and Bingo).  I learned about Midwestern cuisine and was treated to an eye-opening array of cultural experiences.  I wrote two books — and even went on two national book tours.  I looked for new love and — after several ill-fated attempts (remember the guy with the guinea pig and the big-screen TV who moved in?) — I finally found it.

That’s a lot of good material. But the words are just not flowing.

I’ve been working on this book for nine months and four years. Nine months since I came back all pumped up and bursting with mojo from my writers’ retreat in Taos. And four years since I first determined — while still living in the famous house — that this was a book I had to write and that I would — and could — commit to it.

Do I have the interest and drive to finish a book-length work on this subject? This is the first question to answer before starting the long journey. (In my case, really long. Painfully, crookedly, stuck in stop-start traffic long.) And my answer, of course, was yes.

Approaching my memoir like a novel, I had also already cross-examined myself on the questions agents and publishers will ask:

What is this book about? How would you sum it up in two sentences? Who is this book for? Who is your audience? What is the protagonist’s struggle? What are the obstacles she needs to overcome? Who are the other characters in your story? What are the elements of suspense that will keep the reader turning the pages?

In other words, Why the fuck would anyone want to buy my book, let alone read it?!

Why? “Because you write it in a way that makes it interesting,” writing coach Jen Louden told me tenderly when I went to her in tears during the Taos retreat last April/May.

My experiences living in the American Gothic House — and in Eldon, Iowa, in general — were definitely interesting. But how to corral all those snapshots into a narrative album that that gels into a cohesive story, flows with emotional resonance, that shows not tells, that doesn’t drone on for 412 frickin’ pages (like it does in its current draft form)? How to weave all those outlandish (and outrageous) tales into a tapestry of well-crafted prose and make it sound more “literary” with clever metaphors, fresh new insights, and philosophical revelations? How to write it in a way that ensures reviewers will praise my book instead of ripping it apart? How to make it so goddamn brilliant it lands on the New York Times bestseller list?!

How? How about just not worrying about it? How about writing and not stopping until you reach the end? I’ve heard more than one writing instructor say, “Don’t think about editing until you have a complete draft.” (Otherwise known as the Shitty First Draft.) “Then you can go back and deepen and thicken it. We are storytellers. Just tell your story.”

Besides, as Jen has said, “It’s the attitude you bring to your writing that’s far more important than your inborn talent.”

Attitude? Oh yeah, I copped an attitude. After Taos, my attitude was Git. Er. Done. (You know things are bad when you start quoting Larry the Cable Guy.) 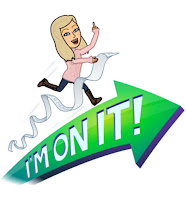 When I got back from Taos in early May I set up a new office in the farmhouse. I put on my big girl overalls. And I got to work. I had the momentum. I really had it going. My start — after four or five previous attempts — was not a false one this time. I was cranking out the chapters (38 of them!) and making steady progress toward those golden words: “And she lived happily ever after.” (Or maybe just “The End.” But most likely “To be continued.”)

I was feeling good about the majority of my work. I had even shared pages with a few of my most critical friends and got positive feedback. There was humor and heartache and honesty and detailed descriptions to put the reader in the scene. My words were flowing like warm honey on toast, baby. I was staying disciplined and keeping my butt in the chair. And, most important, the muzzle I put on my Inner Critic was holding tight. I was almost done with my first draft. Almost. Until I was derailed by a trifecta of interruptions. The Holidays. My dog Jack getting sick. (He almost died!) And the hard drive on my 4-month-old MacBook crashing (It died! Luckily I didn’t lose my data.) Fun times.

My writing came to a standstill for more than a month.

Last week I got my butt back in the chair and opened up the Word doc for my neglected manuscript. In order to get started again I read back a few chapters.

And that’s where the exasperated, book-throwing bitmoji comes in.

I texted this bitmoji to my sister (she is the one who introduced me to this amusing app) with the message, “My writing totally sucks.”

She replied with her usual quick wisdom: “You are exactly where you are supposed to be in the book-writing process.” 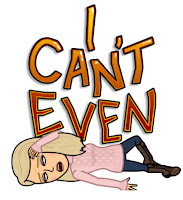 She then suggested a few books for me to read, starting with Reasons to Stay Alive (by Matt Haig.) Geez, did I sound that despondent?! She also recommended watching a recent 60 Minutes interview with John le Carré (aka David Cornwell.) I checked out both.

Matt Haig writes, “Beware of the gap. The gap between where you are and where you want to be. Simply thinking of the gap widens it. And you end up falling through.”

Funny, I had just heard Jen Louden say this very thing in an online class last week. She reassured the audience that everyone has a gap. Even the most successful authors. “Post a note above your desk and write this on it,” she suggested. “Everybody has a gap.”

Haig also wrote in his book (that I always mistakenly call Reasons Not To Kill Yourself,) “Don’t worry about the time you lose to despair. The time you will have afterward has just doubled its value.”

Again, this struck me, as I had just watched an interview on YouTube of memoirist Dani Shapiro talking about her writing process. She had stepped away from a manuscript for a few months and when she came back to it she wanted to take a pickaxe to it!

She despaired, but she called it “productive despair,” claiming that the time away was necessary and useful because it gave her perspective. Only after coming back could she see with clarity that her book needed restructuring. She said it’s the second to last stage of the book writing when you have to move through the murky waters before touching the bottom, and that the bottom is what it takes to propel yourself back “up, up, up” to the surface. “There’s light up there,” she said, “but first we have to live in the depths.” 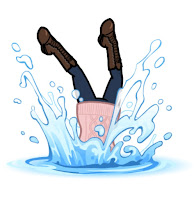 I’ve been living in the murky depths longer than my short attention span allows. Three months is a comfortable length of time for me to immerse myself in a project. Three months, not nine months and four years. (I finished my other two books in well under a year.) Worse, my stalled-out period is pushing the finish line even farther out. How much longer is this going to take?! 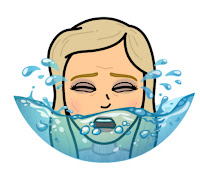 Le Carré said of his first book, the bestseller The Spy Who Came in from The Cold, “I wrote it very fast, the story. But I had no idea where I was going at first. And it just flowed.”

That’s how I felt about writing Making Piece. It flowed so easily I felt like someone else was writing it and I was just there to type. So why has my American Gothic House memoir been such hard work? Why does it feel like it’s a baby that doesn’t want to be born?

Le Carré  answered the questions for me as he continued, “I think you get a break like that once in your writing life. I really believe — nothing else came to me so naturally, so fast.”

There you have it. Le Carré had his gaps. He had his productive despair. He had to work at his writing — really work. And look where it got him. He’s made enough money to buy a private jet. (Though he is so humble he would never think of it.)

As I continued to listen, I exhaled (as one must do when Scuba diving in the murky depths of productive despair.) I could feel the air leave my lungs, percolating out in a stream of little bubbles. The fact that I was still breathing was as encouraging as John le Carré’s admission that writing is hard even for him. 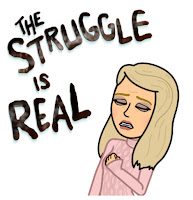 I take in all of this as encouragement, a new inventory of helpful wisdom from those who have dredged the sea bottom before me. But I’m still underwater, still struggling. Especially with the overall theme of the book. Because the most important question of all to me is What will the reader take away from my story? Will they be inspired to choose their own fork in the road and follow the path that beckons to a new and unknowable adventure? Or will the reader wonder, “Girl, why the hell didn’t you just move out when you saw that first snake?” and then dismiss the rest of the story.

So while I wait to hit bottom (Seriously?! It’s going to get worse before it gets better?!) I will accept that this is my gap. 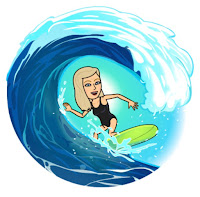 I will do the breast stroke through the dark waters and trust that I will eventually swim back to the surface.

I will look for new methods of silencing my Inner Critic.

I will stop putting time pressure on myself. (Who cares how long it takes? Some authors take five, ten years to write their books. And they end up being classics. Hello? Ever heard of Gone With the Wind, Harry Potter, The Hobbit?)

I will clean off my mask and snorkel, and grab my surfboard. Because that flow is coming back and I’m going to be ready to ride that wave when it does.

I will finish (and publish) this book. And once I’m done I will text my sister. I already have the perfect bitmoji for it.