Skip to primary content
This aired on Tri States Public Radio March 21, 2019   LISTEN HERE
The 2020 presidential campaign has begun and with it the Democratic candidates are descending upon Iowa. Flying in from all parts of the country, they are bringing with them the promise of new ideas, new policies, and, god willing, a new administration.

Beto O’Rourke, Amy Klobuchar, Cory Booker, and Kirsten Gillibrand are just a few of the contenders making the rounds in the Hawkeye State this month. These politicians and their entourages, along with the hoards of reporters trailing them, are traveling through our communities, gassing up their cars with ethanol, giving their speeches, shaking hands, and staying just long enough for pork chops and photo ops before rushing off to the next town.

It’s a privilege to live in the state where the journey to the White House begins, and to meet the candidates up close.
But as the race gathers momentum, so does the outrage.
The news channels—you know, the ones that serve up opinions and speculation and call it news—are all awash in analysis and criticism of each candidate. Commentators are scrutinizing them down to the most minute details of their past, going all the way back, as we’ve seen, to their birth. The coverage, even on public radio, gets so excessive I have to turn it off.
And on social media—a forum that amplifes both good and evil—a new round of vitriol and bickering between friends has already started. 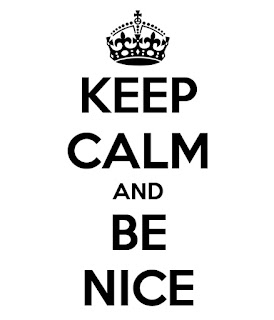 For example, no sooner had I attended a Beto O’Rourke “meet and greet,” I saw a friend’s Facebook post attacking him with a viciousness that was unwarranted. Beto hadn’t committed any sin—he hadn’t mocked a disabled reporter or paid hush money to porn stars; he had merely announced he was running for office. The friend’s Facebook comments were so mean I wanted to blast him back with positive counterpoints. But instead of engaging, I took a calming breath…and then I unfriended him.
Throughout my childhood, my parents engrained in us rules of conduct, like, “If you can’t say something nice, don’t say it at all.” Now is a crucial time for everyone—citizens and candidates alike—to heed that parental advice.
During the last election cycle, in his video that went viral, actor Scott Siepker coined the phrase, “Iowa nice.” The term depicts Iowans as friendly, agreeable, hospitable, and showing trust in strangers. But “Iowa nice” needs to expand beyond our cornfields and cows. We need to be “America nice” instead of “America first” or “America great.”
Americans in general used to have the same friendly, hospitable and trusting reputation as Iowans. Sadly, that image has become tarnished.
“America’s standing in the world has dropped catastrophically,” says Simon Rosenberg, founder of the New Democrat Network think tank.
Why?
Because we aren’t being nice.
“Bombastic rhetoric and policies of Trump have given the country a serious branding issue,” US News and World Report states. They cite that in the Best Countries rankings of 2018, the United States dropped from fourth down to eighth place after Trump took office.
However, as David Rothkopf, a visiting scholar at the Carnegie Endowment for International Peace, reminds us, “America is not its president [alone].”
He’s right. It’s up to all of us to make America nice again.
This year we have the opportunity to do that. We can elect a new leader, someone who will uphold our democracy and raise up our country. But we cannot get there without everyone being on their best behavior and acting with decency.
That guy on Facebook slinging insults at candidates in his own party? That’s just a tiny sampling of how polarized, combative—even hateful—we’ve become. We’ve already divided ourselves into tribes, but this kind of rancor further separates us. Well, I’ve got news for you. We are all human beings, and we need to treat each other as the single species that we are. We don’t just live in one country; we live on one planet. And we need to take care of it and each other, no matter what our beliefs. We need to be tolerant. We need to be respectful. We—the media included—need to stop making such negative, inflammatory comments.
In short, we need to be nice.
Let’s start by changing the vernacular. Instead of emphasizing the extremes between progressives and conservatives, let’s put party affiliations aside and focus on values—like integrity, equality, accountability, compassion. And here’s a big one: compromise. Because nothing—absolutely nothing—will change in Washington—or anywhere—unless we stop clinging so stubbornly to our own political agendas.
The American ideal is not one of Us vs. Them. It’s about being united. Finding common ground is possible, but we need to keep the pendulum from swinging too far to either side. It’s vital that we meet in the middle and getting there starts by being more civil to one another.
Election Day is still a long way off and it remains to be seen who will be on the ballot. But let’s choose someone who makes bipartisanship a priority, someone with good manners.
Wouldn’t that be nice?
For more commentaries by Beth Howard on Tri-States Public Radio