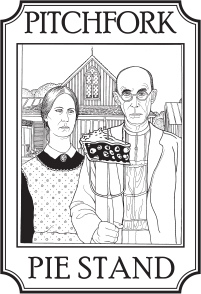 A few weeks ago, I posted a couple of polls on my Facebook business page, The World Needs More Pie, about reprising my Pitchfork Pie Stand. Bring it back for the summer at the American Gothic House, or rent a retail space within walking distance of the house on Eldon, Iowa’s main street? I stirred up expectations along with an outpouring of support, and now some of you are asking what I decided to do.

I wanted to give you an update about my decision, my activities, and my plans.

I’ve decided not to rent the retail space. 95% of the responses were an enthusiastic “GO FOR IT!” including the one from my mom. But there was one friend, who knows me maybe even better than my mom, who said, “ARE YOU CRAZY? You don’t want to be tied down.” Her words snapped me out of my fantasy, though it was an exciting one while it lasted. I miss people. I miss the community that pie creates. So a newly renovated space where I could sell pies, teach pie classes, sell pie-baking supplies, and provide a space where people could gather seemed like a good solution.
It sounded so good on paper…

But the reality check was this: I’m a terrible businessperson; I suck at bookkeeping. I want (and need) to travel; a year-round retail space would require me to stay put. The rent was very high for a rural town; I’m not prepared to take out loans or drain my savings. While my shop would bring people to town, the tourist season is short; it would be hard to sustain business (and pay rent) in the winter. And then there’s winter itself. I suffer from S.A.D. and the ONLY solution that works for me (and I’ve tried them all) is go south like a snowbird.

Which brings me back to my original idea: reprising the Pitchfork Pie Stand inside the American Gothic House for the summer months. 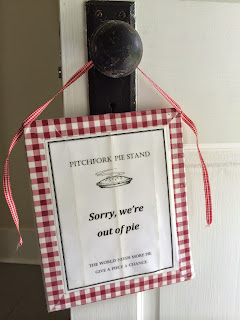 Sadly, the pie stand will not be returning to the American Gothic House. The AGH is owned by the State Historical Society of Iowa and the state employee who manages it, along with six other historical sites, has a blanket policy for all: No Baking Inside. No matter that I baked THOUSANDS of pies in the house during the four years I lived there. No matter that bringing the pie stand back for the summer would draw more tourists, create community, and contribute to the local economy. Policy is policy.
Not one to take no for an answer, I considered going above his pay grade and asking for permission from his boss, his boss’s boss, hell, I’d have gone all the way to the governor. Or I might have organized a public campaign with my supporters to lobby for the pie stand. But I have too many other things to do with my time than battle bureaucracy. (For the record, I did consider baking elsewhere and transporting the pies to the AGH, but there’s a long list of reasons why that’s not a viable solution.)
I’m sorry that Eldon’s visitors will miss out on pie. I’m sorry that I won’t get to bake with you. But I’m especially sorry that the AGH is not getting utilized. (The historical society won’t even allow you to plug in a Crockpot!) The AGH has a soul—I felt it the first time I saw I stepped inside—and I know it’s happier when it’s filled with life. And I don’t mean snakes! The pie stand would have been a win-win for everyone. It’s a shame the rule-makers in Des Moines don’t see it that way.
So what’s next then? 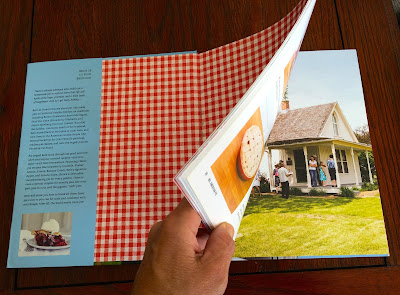 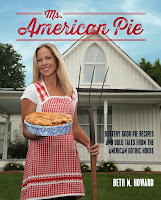 I’ve been working on edits for the second edition of my cookbook, “MS. AMERICAN PIE.” My original publisher took it out of print—such are the disappointments an author faces. I was planning on self-publishing it just so I could get it back out there in the world, but at the last minute, I signed on with Interlink Books. They will release the book next March (2022), and possibly with a new cover. Ten months seems like a long time, but given the high quality of Interlink’s printing, along with its sales, marketing, and distribution abilities, it will be worth the wait. It’s—hashtag—somethingtolookforwardto.

I’m also working on my next book, “WORLD PIECE: One Woman, One Rolling Pin, Nine Countries, and the Desire to Make a Difference.” I completed my three-month round-the-world pie-making journey in 2015 (watch the 23-min film here), and did not expect writing the memoir would take far more time and effort than the trip itself. But that’s partly because I’ve only been working on it intermittently since my return. I dedicate myself to it in spurts, but I keep getting sidetracked. I’m finally ready—I swear—to get it to the finish line by the end of the summer. Which is another reason for not doing the pie stand.

One of the projects that sidetracked me from “World Piece” was television—not watching it; writing for it. After a friend encouraged me to enter, I won a contest for a TV Pitch Workshop with Marta Kauffman. You may not recognize her name but you know her TV shows, “Friends” and “Grace and Frankie.” I was always terrified of the script format, but after downloading the software and giving it a try, I discovered that I actually LIKE writing scripts! I wrote my first TV pilot, have a good start on the second episode, and have outlined five seasons of the story arc. I even made a video pitch:
What’s my scripted TV show about? What is anything in my life about? PIE, of course! I had tried—and failed—to sell my memoir about the four years I lived in the American Gothic House, but winning the TV Pitch contest prompted me to repurpose it as a TV series. It works MUCH better as a dramedy than a memoir, because by fictionalizing it I can tell the real story about what happened and no one will know the difference! Marta likes my idea, but said she’s got too much on her plate to take it on. But now that the “Friends Reunion” is finally done, maybe she’ll reconsider.
That’s the long answer to “What did you decide about the pie stand or pie shop?” Yes, it’s disappointing—for me, too—but I’ve got plenty of other pie-related projects to keep me busy. And I have not discounted the possibility of doing a pop-up pie stand, maybe this summer, maybe at the American Gothic House Center (the museum and gift shop next door to the AGH), maybe somewhere else. Thank you for your continued support and enthusiasm. Life as a writer can get lonely; it helps to know you’re out there, just a Facebook comment or text message away.
One last thing before you go…

If you’ve read my books would you mind writing a review on Amazon? It would help so much. It’s a sad new reality in publishing that agents and publishers look at the reviews on that giant (some would say evil) website when considering representing authors. This goes for all authors, not just me. Those book reviews matter.

💟
Some previous blog posts you might like:
World Piece Homecoming: But Where is Home?
American Gothic House: It was a Magical Four Years
The Book That Doesn’t Want to be Born…Yet (on writing my AGH memoir)
A Sneak Preview of my Pie Cookbook (first edition)

2 thoughts on “What Did You Decide About the Pie Stand?”