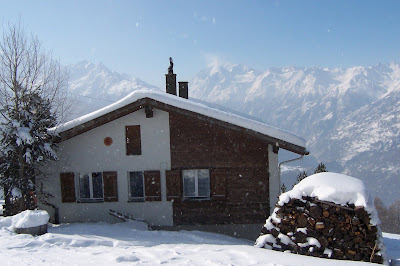 The beauty of having an Internet connection (and a pie blog) is being able to stay in touch with friends, family, and news worldwide. Today I had two friends call me using Skype – a fabulous, free phone-like service that also allows you to see each other with video. One friend called from London, the other from Switzerland – to comment on Wednesday’s “Apron Collection” posting. Amazing! This is how pie can change the world, connecting people through a simple, delicious – and no, not that fattening! – subject. (Another friend had emailed from Portland saying, “Yes, the world – but not my butt – needs more pie.” Wrong! Pie is good for you! But that topic is for another day.)

Alayne, whose donated blue and white checkered apron was pictured fourth from the left, called from London to say she loved the pie blog. An hour later Eve Kamer, my friend from Switzerland (who I’ve known for 24 years!), called to tell me she recognized two of the aprons in the picture.

“You wore the red one on the far left when you made Thanksgiving dinner for us in Oberdiessbach four years ago. And I remember the white one too. I had never worn an apron until you showed up with your collection. In fact, I had never learned the English word for apron until that Thanksgiving. And, by the way, we still have your big pie dish.”

Eve brought up some great memories. I had always promised her family I would make them a real American Thanksgiving feast one day. I finally took the opportunity when I was living three hours away from them in Stuttgart, Germany. I spent days preparing ahead of time shopping for sweet potatoes (which are very hard to find in Europe), baking cranberry bread, and making several pumpkin pies. I made one apple pie too, just in case. (To me Thanksgiving is all about pumpkin!)

We indulged in this hearty meal at Eve’s house, a converted flour mill in the Swiss village of Oberdiessbach, 30 minutes outside of Bern. Eve’s mother, sister, two pre-teen daughters and six other friends came to partake in this American tradition. It was Eve’s mother who contributed a Swiss tradition: she taught me how to keep the turkey warm by placing a sheepskin rug over the (foil-covered) roasted bird. During the meal everyone took a turn saying a few words of gratitude – something I insist on at every Thanksgiving to bring home the point that this is, after all, a meal to give thanks – and finally we ate pie.

The pumpkin pie…well, my husband and I helped ourselves to large slices, while the Swiss each took just a tiny sliver, barely a taste. It appeared they were trying to be polite. But after the apple pie got passed around the dish had been picked so clean it looked like it had already been washed. “Next time you could make more apple,” Eve noted as we packed up the last of the turkey and potato leftovers.

While we were still connected on Skype, and since I was sitting at my computer anyway, I started hunting in my document folders for pictures from that Thanksgiving. “I can’t find any photos,” I told Eve. She said she didn’t think she had any either. “But I have the pictures you sent me from our ski trip in the Alps, that February after Thanksgiving.”

“In Visperterminen? Yes, that was the best apple pie,” she said. She remembers the pie I made that week in our rented Swiss Chalet; I remember the fondue. So there you have it: Two cultural food icons, two distinct memories, and one very long lasting friendship.

Before we signed off Skype I told Eve to just keep the pie dish.

* * * * * * * * * *
In the shadow of the Matterhorn… We spent a week (in the house pictured above) skiing, baking pie and eating lots of cheese in various melted forms. Below, Eve’s two daughters and their friends dip forkfuls of bread into Fondue. 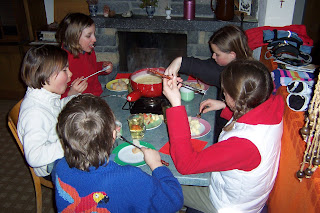 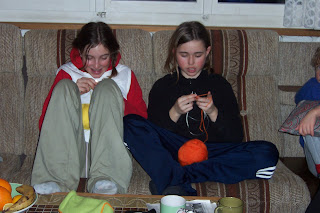 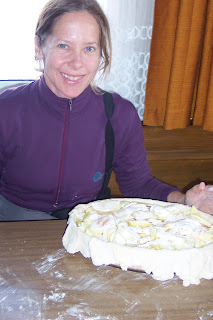 Here I am, apres ski (still wearing my ski pants) getting ready to put the top on an apple pie, while in the next room Eve’s daughter and her friend knit. So cozy, so Swiss!
PrevPreviousMy Small-But-Meaningful (and Wrinkled) Apron Collection
NextWhat to Feed the Worms? Pie, Of CourseNext
Subscribe for Updates
Copyright 2022 | All Rights Reserved
Facebook Twitter Youtube Instagram Goodreads-g Pinterest