From my cookbook, MS. AMERICAN PIE

2-1/2 cups all-purpose flour + another 3/4 cup for rolling surface
1/2 cup butter, chilled
1/2 cup Crisco (or lard or butter, your choice)
1/2 teaspoon salt
Ice water (fill one cup but use only enough to moisten dough)

In a deep bowl, work the butter and shortening into the flour with your hands until you see marble-sized lumps form. Think mixed nuts, like peanut and almonds. Add ice water a little at a time, tossing it around the flour with your hands as if they’re salad tongs. Keep your movements light. When the dough feels moistened enough, do a “squeeze test” and when it holds together you’re done. Do not overwork the dough! You are not kneading it like bread. It takes very little time and you’ll be tempted to keep touching it, but don’t! Now divide the dough in two, form each half into a disk shape. (Coat your hands with flour to keep dough from sticking to them.) On a clean, dry workspace, sprinkle flour under and on top of your dough. Roll flat and thin to the point you can almost see through it. (Keep rolling surface and pin free from gunk to keep dough from sticking.) Carefully peel dough off surface into a half-moon, then place halfway across pie dish and unfold it, gently pressing air out from underneath. Trim excess dough to about 1 inch from the dish edge with a scissors.

7 large Granny Smith apples, peeled
(Number of apples will depend on size of apple & size of pie dish, but general amount is about 3 lbs. per pie) It’s also okay to use a variety of apples. Try Braeburn, Jonathan and Gala.
3/4 cup sugar (more or less, depending on your taste or tartness of apples)
4 tablespoons flour (to thicken the filling)
1/2 teaspoon salt (you’ll sprinkle this on so don’t worry about precise amount)
1 to 2 teaspoons cinnamon (or however much you like)
1 tablespoon butter (put dollop on top before covering with top crust)
1 beaten egg (you won’t use all of it, just enough to brush on pie before baking)

The pie is “assembled” in two layers. Layer one: Slice half of the apples directly into the pie, pressing down gently to remove extra space between slices. Fill dish enough so you don’t see through the first layer to the bottom crust. Sprinkle on half of the dry ingredients (salt, cinnamon, sugar, flour—I repeat it like a mantra so I remember the four things). Slice the remaining apples on top of that and sprinkle with the dry ingredients (salt, cinnamon, sugar, flour). Add dollop of butter on top and cover with top crust.

Trim and seal the edges by rolling the top and bottom crusts together, then crimp with fingers or a fork. Brush with beaten egg. (The egg gives the pie a nice golden brown shine; be careful not to let egg pool in crevices.) Use a knife to poke vent holes in the top (get creative here with a pattern.)

Bake at 425 degrees for 10 to 15 minutes, or until crust browns. Turn oven down to 375 degrees and bake for another 30 to 40 minutes until juice bubbles. Keep an eye on it as it bakes. If it gets too brown, turn down the temperature. To be sure it’s done, poke with a knife to make sure apples have softened. Do not over bake or apples will turn mushy. Be sure to share the pie with someone who needs their spirits lifted. 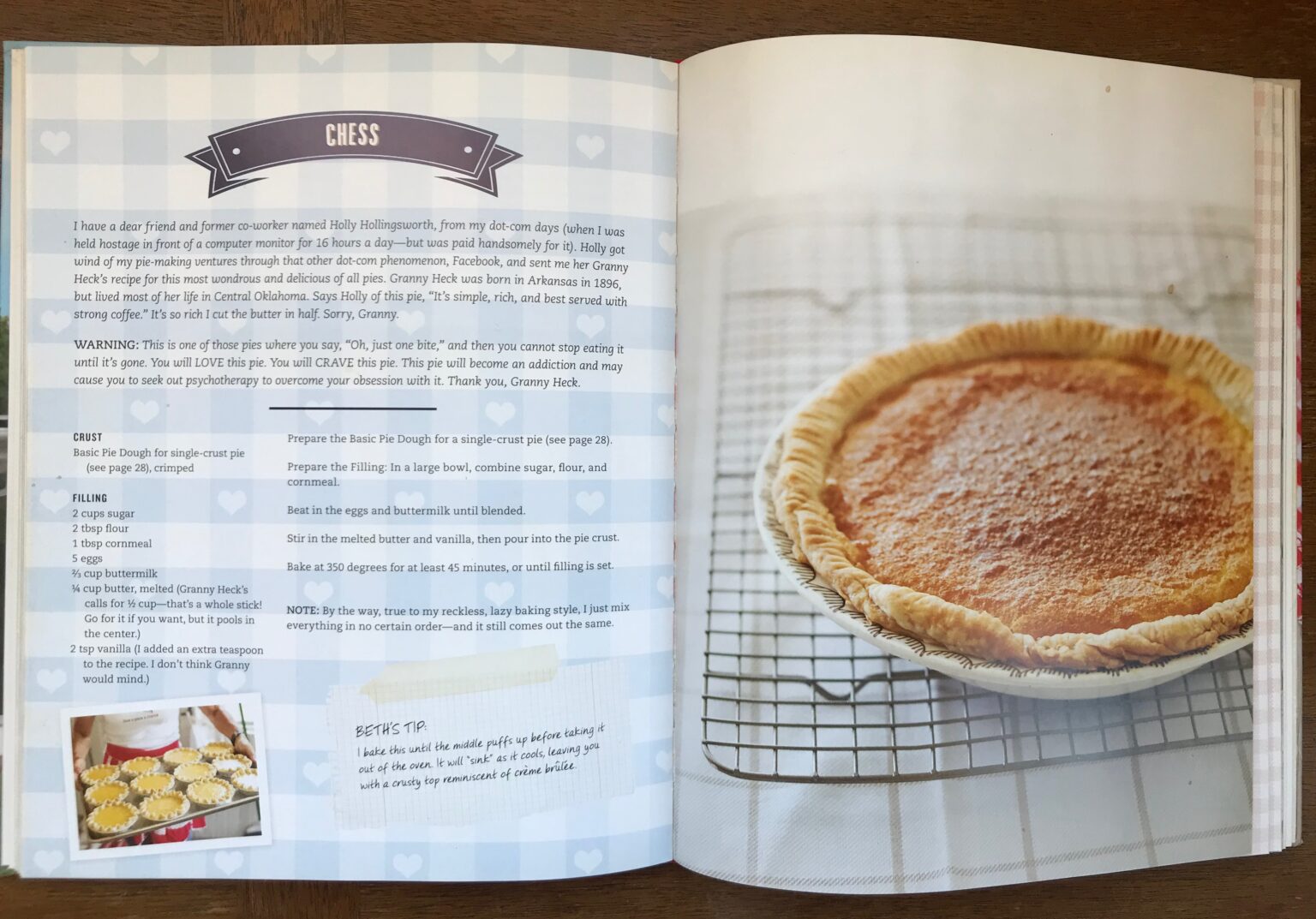 In a deep bowl, work the butter and shortening into the flour with your hands until you see marble-sized lumps form. Think mixed nuts, like peanut and almonds. Add ice water a little at a time, sort of “fluffing” the flour. Keep your movements light, as if you are tossing dressing into a salad with your hands.

When the dough feels moistened enough, do a “squeeze test” and when it holds together without dry bits in the bottom of the bow you’re done. Do not overwork the dough! You are not kneading it like bread. It takes very little time and you’ll be tempted to keep touching it, but don’t!

Form it into a disk shape, sprinkle flour onto your rolling surface, and roll flat and thin to fit your pie dish. (Roll thin to where you can almost see through it.) Keep rolling surface and pin free from gunk to keep dough from sticking.

To get it into pie dish, peel the dough back slowly and carefully, until it’s “folded” in half. Use a dough scraper if you have one to help lift it. Lay it halfway across your pie dish then unfold, pressing the air space out from the bottom edges of the dish.

Trim excess dough to about 1 inch from the dish edge with a scissors. Using your fingertips, roll the crust edge under so it sits like a rope on the rim of the dish. (Do not fold it. Do not push it down into the dish. You want it sitting on the rim of the dish, but not hanging over it.) For a decorative edge, either press down with a fork, mold the dough with your fingers into a ruffle pattern, or cut out shapes of dough and place them around the rim.

2 cups sugar
2 tbsp flour
1 tbsp cornmeal (I use 2 tbsp, throwing in an extra tbsp, because why not?!)
5 eggs
2/3 cup buttermilk
1/4 cup butter, melted (Granny Heck calls for 1/2 cup —that’s a whole stick! — but the excess butter pools in the center.)
2 tsp vanilla (Granny Heck calls for one, but I like the extra, and I don’t think she would mind.)

NOTE: True to my reckless, lazy baking style, I just mix everything in no certain order—and it still comes out the same.

TIP: I bake this until the middle puffs up before taking it out of the oven. It will “sink” as it cools, leaving you with a crusty, browned top reminiscent of crème brûlée.