Pie scenes during my trip to New York City were plentiful and I would be remiss if I didn’t report on them.

My stay kicked off by having dinner with my fabulous literary agent, Deidre Knight, who I hadn’t yet met in person. Obviously our first meeting — over a delicious meal in SoHo at The Dutch — was a huge success. Why? For one, it ended with pie! Pictured is the Buttermilk Pie with a gingersnap crust and the Grapple Pie, a combo of apples and grapes. The Dutch’s pie was not blue-ribbon-worthy (they were complicating something that should be respected for its simplicity) but still it was encouraging to see that NYC is embracing this quintessential comfort food. 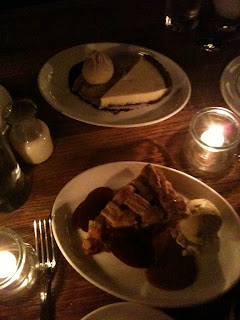 I made a point to walk everywhere, rain or shine. On a blustery day, making my way back from Wall Street to the West Village, I veered through TriBeCa and passed Bubby’s. I had heard of this “pie shop” but from the outside it looked like a busy semi-upscale restaurant. So I kept walking. One block later, I couldn’t shake the notion that in spite of appearances this could be the place New Yorkers flock for pie, so I turned around, walked in the door, followed my pie radar, and found it! Yes, there was pie! 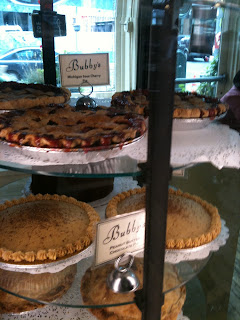 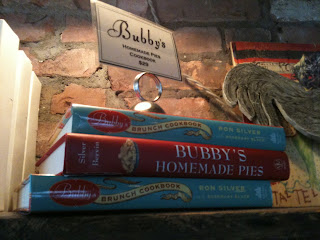 And, as a nice touch, they offer a park bench outside on which to sit and admire a cow while you’re digesting your meatloaf, mac and cheese, and peanut butter chocolate pie. (Who could walk immediately after that kind of meal?!) 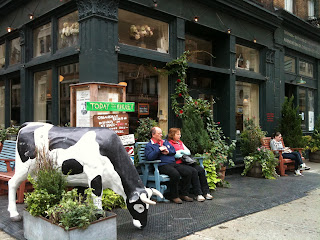 On another trek across town, from the West Village to Midtown, I stumbled upon New York Cakes and Bakery Supply in Chelsea. Pie baker’s dream store or nightmare? I can’t say for sure. All I know is that I was overwhelmed by… 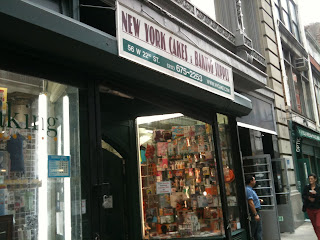 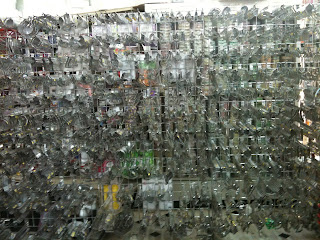 …And a million rolling pins of all shapes and sizes. 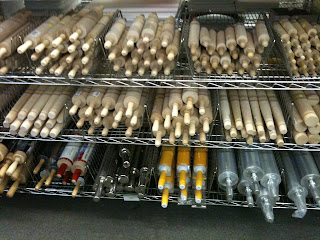 I picked out a few items to buy, decided I should come back later when I had more time, returned my items to the shelves and racks, and then, naturally, never made it back. Oh well. There’s always mail order.

And then, walking through La Guardia Airport as I went to take my flight back to Iowa, I saw this pie book prominently displayed in a souvenir shop. The book was a compilation of recipes from over 80 chefs, created by a New York photographer, and therefore qualified as a memento of the Big Apple. Hey, whatever. Works for me. 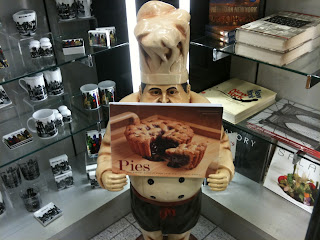 So even in a mega-size city full of noise, chaos, and competition, all around me there were signs of pie. And that made me feel right at home.

Another thing I managed to fit into my tight New York City schedule was lunch with an old roommate of mine, Carol Barnett-Stark. I lived in Manhattan when I was 25 years old. I had moved back to the U.S. from Nairobi, Kenya and started a coffee import business I called Livingstone Provisions. (Back when I had that enviable combo of big dreams and excess energy. How I miss those days.) I was trying to end an affair with a married man and Carol, an aspiring actress at the time, was trying to escape a religious cult. We rescued each other by sharing a one-bedroom walk-up on the Upper East Side, solving all our problems by sitting on the fire escape and talking late into the night over steaming cups of chamomile tea and ginger snaps.

Fast forward 24 years. Carol is still in New York with a darling 7-year-old daughter and I’m in rural Iowa with two unruly terriers. In spite of the number of years that have passed we have more in common than we knew. We had both married German men. She is (amicably) divorced from hers and, as we all know, my husband is…well, deceased.

When I went to meet her for lunch last Friday, taking the elevator up 20 floors to her office in a slick Times Square highrise, I learned we shared a bond over more than lost German husbands. We also had grief in common. Carol’s dad, Frank, had died just two weeks earlier.

From our emails over the past year I knew her dad had been sick. He had been getting chemo and was doing much better than the doctors had predicted. He was living on his own, still meeting his friends for coffee every day, and then, out of nowhere, he had a stroke, his heart stopped, and he was gone.

Oh, I know what that feels like. To lose someone with no warning, no chance to say goodbye. Robbed of the opportunity to say “I’m sorry” or “I love you” or both. No time to say, “PLEASE DON’T GO!!!! I DON’T KNOW HOW I WILL SURVIVE WITHOUT YOU.” But they leave us –sometimes in an instant – and we are left with our tears, our grief, our loss, emptiness, confusion, our desperation.

And thus, last Friday, I happened to have stepped not only into Carol’s glass-walled office (with a million-dollar view of 42nd Street), I stepped into her grief. Fresh and raw. I recognized it all too well.

“What should I do?” Carol asked me coyly upon sharing her devastating news. “Make pie?”

I smiled at her to mask the sadness. “Well, it couldn’t hurt,” I said. “How about if you read my book? I mean, if you’re ready. You will see all the ways pie helped me. It’s not out until April, but I’ll send you a copy of my manuscript.”

She nodded and said, “My dad loved pie. He was known for his pecan pie. Everyone loved his pie so much they always expected him to bring it to their picnics and parties.”

“Are you serious? You never told me. I had no idea pie baking ran in your family.”

She continued, “When we had to print the program for the funeral we couldn’t come up with any scripture or other quotes that fit my dad. The funeral director said sometimes people include other things, like a favorite recipe. So we included my dad’s pecan pie recipe.”

My jaw dropped. I couldn’t believe I was sitting in the middle of Times Square talking about life, death, and pie recipes printed in funeral programs. But there it was, another example of the far-reaching powers of pie. I like to think all those friends and family attending Frank Barnett’s farewell service smiled at seeing the recipe in such an unlikely place, and that they will all carry on his legacy by making his favorite pie themselves.

When I returned to Iowa I couldn’t stop thinking about my lunch with Carol. (I say “lunch” but we talked so much and so long I barely had time to slurp down a bowl of soup before my next appointment). Her dad remained very much on my mind. I wanted to tell the world about Frank, his pecan pie, and how his recipe played such a special role at his funeral. I asked Carol to send me the recipe and a picture of her with her dad. She sent both, along with this note:

With Thanksgiving approaching he would be getting requests and he would be so excited to whip up those pecan pies. He shelled the pecans himself. He was a salt of the earth kind of guy. Content to sit on the porch and watch the grass grow. Or go into town to have breakfast with his buddies. Perhaps ride around on his tractor lawn mower, taking care of the grass. He was a simple man with a great sense of humor. The most patient person you’d ever meet. I can’t tell you how many people came up to me at his funeral and said “Your dad was my best friend.” I thought WOW, my dad made everyone feel like they were his best friend…that’s awesome. I too will make my first pecan pie in his honor this Thanksgiving – and be thankful for the amazing dad I had.

Carol is truly an inspiration and sets an example of dealing with grief with grace. She reminds me that I, too, have a lot to be thankful for. And to honor that, I’ll scrap my trusted pecan pie recipe (the one on the Karo Syrup label) and make Frank’s recipe for Thanksgiving instead.

Twenty-four years after meeting Carol, we are still rescuing each other. Our wounds are much bigger than before, but we have stronger weapons to heal this time. We have a lifelong friendship to fall back on. And now we have pie.

I went to New York City last week to meet with my agent and book editor. Five months out from my book being published (pre-order hardcover here), we had a lot of planning to do for the publicity and book tour. Since moving to Eldon, Iowa — into the American Gothic House — over a year ago I’ve done surprisingly little travel, so it was a bit of a shock to the system to go…

But meeting with my book publishing team wasn’t the only thing on my NYC agenda. I stayed with my best friend from childhood, Nan, and she arranged for me to hold a pie-making class in her new West Village apartment. Ten women — all professional, highly successful New Yorkers — and I would be teaching them to how to make my signature, no-measure, “pie is not about perfection” apple pie! (Uh, yeah, good luck with that, right?)

First stop was the Union Square Farmers’ Market to buy apples. I admit to gasping at the prices. I mean, a buck fifty to two bucks a pound for apples when New York State is second only to Washington State in U.S. apple production? Shouldn’t these be around 50 cents a pound? Alas, this was no time for lamenting the prices. I was in Manhattan after all… Hello???? — The Big Apple! After I talked the seller down to $1.25 a pound, Nan and I loaded up 30 pounds of Granny Smiths into her “granny cart” to lug the produce one-mile home — on foot. (And you wonder why New Yorkers don’t get fat?!) After dropping off that load we made a second trip with the cart to get flour, sugar and butter at D’Agostino’s. 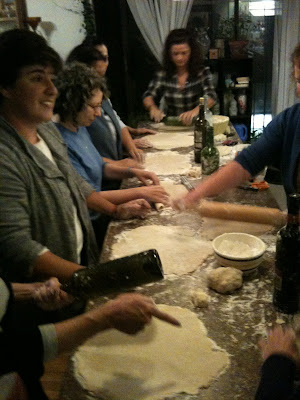 We improvised alright. We used whatever bowls we could dig out of Nan’s moving boxes, took turns with the knives, and gathered our empty wine bottles to use as rolling pins. This meant we had to drink fast to get ten rolling pins. Ahem! 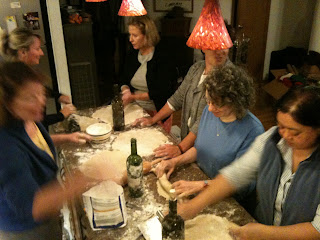 Nan’s apartment is huge by New York standards with more square footage than the American Gothic House and a kitchen triple the size of mine. I’m not exaggerating. Case in point: ten of us were able to squeeze around the island. And yet, in spite of the concentration of Type-A personalities wedged together wielding wine bottles to roll their sticky pie dough, everyone worked together beautifully, seamlessly, happily.

And, as usual, listening to the lively banter, observing another crop of newborn pie bakers experience this pure and simple kind of happiness, in turn made me happy. I mean, here was a gathering of VPs, reality TV producers, book publishers, school teachers, children’s book author, actresses, and playwrights — people who might never meet each other — brought together by pie. Let’s just say, this palpable buzz made up for the shoe shopping and dining out time I gave up in order to teach this class.

If every trip to New York goes as well as this one, I will go back as soon as possible. But next time, in order to avoid the red-wine hangover, I’ll bring a bigger suitcase so I can pack my own rolling pins.