Celebrating Oktoberfest with my Book Launch!

It’s here! Hausfrau Honeymoon: Love, Language, and Other Misadventures is now out and released into the world.

It’s been a bittersweet launch for several reasons: the first is that the book is (once again) centered around Marcus. I wrote it while we were living in Germany and later in Portland, and, as you all know, he’s not here to see its publication. I’ve been pretty weepy about that.

The other reason is that, as I said before, self-publishing has introduced me to a new form of terror and raw vulnerability. While I expose the private details of my life in my other books, it’s different this time because I don’t have a publisher or agent to hide behind. It’s just me on the front lines, and every marketing effort I make feels like pure self-promotion. Ugh! I could choose not to promote it, but an author doesn’t pour herself into a project only to launch it and ignore it afterward. So I’m going to get out there, do some bookstore and library events, some media interviews, and more. I’ll post my appearances soon.

Hausfrau Honeymoon has already received praise. The Pulpwood Queens Book Club has named it an official selection and gave it Five Diamonds in the Tiara! Its founder Kathy Murphy said, “It’s good, really, really good! You truly had me from the get-go!“

And John Busbee of The Culture Buzz said, “Beth Howard writes like Erma Bombeck on steroids. But more emotional and more sensitive. She is a reincarnation of writers in that genre.” (Though I would say more like Erma Bombeck with a potty mouth and an attitude.)

I hope this book makes people want to travel more, to explore places like Germany, to be more open to other cultures (even ones that we don’t fully understand or relate to), and to take a chance on life — to dive into a new experience even when you have no idea how it’s going to turn out. That seems to be a regular theme in my life — some people (ahem, my mother) didn’t think I should move to Germany. She didn’t think I should move into the American Gothic House either. But I followed my own instincts and did both. I am forever grateful for the experiences, even when faced with such big challenges — like 7-foot snakes in the American Gothic House!  Or like in Germany, trying to learn “that awful German language” and get Marcus to do the dishes!

I consider my book launch to be good timing, not just for Oktoberfest, but for its feminist bent, because throughout it I am striving for equality in my marriage. So in that vein, I also hope this book serves as a message to women that they matter, their well being matters, that it can be unhealthy to sacrifice too much for another person, and that no matter how much you love someone and want to spend your life with them, you have to still be true to who YOU are and honor your own needs.

Hausfrau Honeymoon is as much a travel memoir as it is a love story — a modern-day fairy tale that’s striving for the happily ever after. I hope you like it. 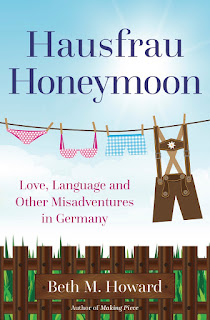 It’s available from Amazon in paperback and Kindle, and from your local bookstore and library. If they don’t have it, ask them to order it! If you want me to do a reading or event, or have me Skype with your book club, or whatever, just get in touch. And if you want a signed book plate to put inside your copy, email me and I’ll send you one.

Now go have a beer (er, Bier) and a pretzel and enjoy it with my book.