I’m having lunch with my friend Carolyn tomorrow. Carolyn volunteered many, many hours last summer for my Pitchfork Pie Stand. She would come over on Thursday evenings and we would weigh and roll out pie dough, slice lemons (not her favorite job, especially picking out all those seeds, but she did it anyway), cut strips of fabric to make pie box ribbons, and so forth. Our work was aided, occasionally, by a glass of wine or a slice of pie, and always by animated conversation. I last saw her in early November when she brought over a homemade chocolate pudding pie — her mother’s recipe — to share on her way to shop for groceries in Ottumwa. 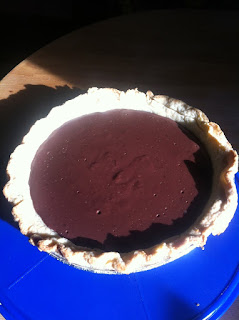 I needed to make a trip to the store myself, so we ate the pie, jumped in the car, and drove the twenty-some minutes to town together. We ended up at Aldi (my insistence, of course) and coincidentally it was the very week Aldi had pie baking accessories in stock. (Aldi offers weekly specials and the baking supplies are only sold once a year, just before Thanksgiving.)

I didn’t need anything since my kitchen is well-stocked and I have given everyone I know these Aldi pie accessories for Christmas presents for the past several years, but Carolyn bought pie plates (2 for 5 bucks!) and an oven liner (one of the most essential items a pie maker can own). She wanted to buy a silicone baking mat but I insisted that I had a whole box of them at home — swag from a company called Chef’s Planet — and that I would give her one from my inventory.

The problem was, I hadn’t opened the box. Until today. Until I knew I was going to see Carolyn and wanted to make good on my promise.

There were no silicone baking mats in the box. The package had arrived sometime in July or August. I was in full-on hyper pie stand mode and I didn’t even have the capacity to open a box of free pie stuff. Sheesh. 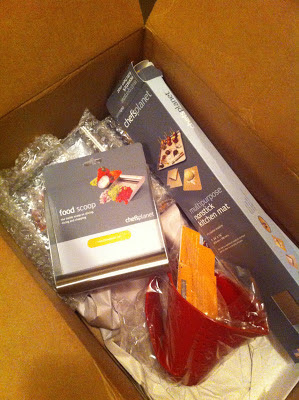 I had already received a box of Chef’s Planet oven liners. I had been expecting that shipment and was waiting for it, thanks to the generous offer from one of the company’s regional sales reps. I go through oven liners quickly. I use them religiously, keeping several clean ones on hand, and swapping them out mid-cycle during my baking marathons to keep the smoke from boiled over pie filling at bay. Besides not wanting to set off deafening fire alarms or create panic among our local emergency crews that I’m burning down the famous American Gothic House, I also don’t care much for the resulting burning sensation in my eyes and lungs.

I will say here too in an unapologetic plug and enthusiastic thumbs up for Chef’s Planet that their oven liners cost twice as much as Aldi’s but they are twice as good. The material is thicker and lasts longer. Well worth paying the extra few dollars.

But silicone baking mats? I don’t remember what made me think that was what was in that second box of Chef’s Planet swag. I just know I didn’t think I needed any at the time. So the box got sent to the pie stand storage room in the basement. And there it has stayed. In the dark. Unopened. For several months.

Imagine my surprise today when I discovered the box was filled with my other must-have pie tool: pastry scrapers. (Chef’s Planet calls them “Prep Taxi Food Scoops.“) Oh, I was really mad at myself. I have really needed a few extra of these this past month! I could have been using them for my pie classes!

There was more in the box. There was a nifty colander measuring cup. Pretty clever. It will be useful when making berry pies next summer. And last but not least — no, not silicone baking mats, but something like them. Some kind of hybrid sheet that works as an oven liner on one side and non-stick rolling mat on the other. Chef’s Planet calls it a Multipurpose Nonstick Kitchen Mat.

So all this to say, I stumbled upon a win-win today. I opened the box and didn’t find what I was expecting. I found something even better. And because there were two Multipurpose Nonstick Kitchen Mats in the box I have one to give to Carolyn when I see her tomorrow. I also accomplished one tiny step toward the goal of cleaning out my storage room. There’s one less bulky cardboard container taking up space. And next time I get something — swag or whatever —  no matter how busy I am or what I think is inside, I will open the box as soon as it arrives. It could be a good surprise.