Marcus would have been 44 today. If he were still alive. I have been dreading this day for several weeks now. Anyone who’s grieved a loss will tell you the firsts are the hardest: the first Christmas, the first anniversary, the first birthday, the first you-name-it, any milestone missed by your loved one is a glaring reminder of their absence. But like most things filled with dreaded anticipation, the day wasn’t as bad as I had expected. To the contrary. 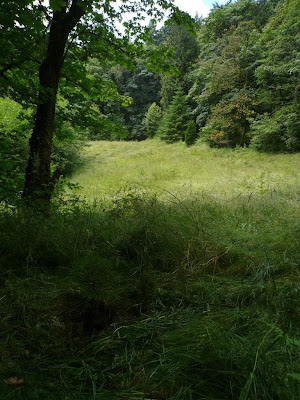 (PHOTO: Marcus’ meadow. The view from his tree.)

I started my day (well, not counting the first part when I got drenched when walking the dogs in a downpour) by my neighbor Sylvia inviting me to have coffee at St. Honore Boulangerie – which Sylvia knew was Marcus’ favorite coffee house/bakery. When I hesitated at her invitation, Sylvia insisted, “Marcus would want you to go.” She’s as good at invoking his posthumous opinion to rationalize something as I am! The pain au raisin was worth whatever writing time I missed.

RETAIL THERAPY CAN ALWAYS BE JUSTIFIED

After that we popped into a new boutique down the street where I indulged in some unexpected retail therapy. I’d been in the store, Oxalis, once before and because I coveted every single overpriced item in there I swore I’d never set foot in there again. (Much the way I avoid going within six blocks of any Anthropologie.) Naturally, the moment I walked in I gravitated toward an organic cotton skirt and top set, embellished with stylish ruffles, exaggerated stitching and a big price tag. The savvy store owner didn’t even ask if I wanted a dressing room. Sylvia (and at least five other people in the shop) insisted I looked fabulous in the black skirt and top when I stepped out to show her. So of course I had to buy the ensemble. I figured since I spent my birthday two weeks earlier bedridden with bronchitis – and it’s not like I could actually buy something for Marcus – the expense was justified.

PLANT A TREE, MAYBE IT WILL GROW BIG ENOUGH TO HUG ONE DAY

Sylvia and I finally set about to our original plan for Marcus’ birthday morning– we planted a baby Redwood tree in Forest Park. The spot was strategically chosen for its proximity to two other Redwoods already growing there (“Redwoods need to be in families, they share roots,” Sylvia explained). The location also happened to be at the lower end of the large meadow – the meadow where Marcus had spent countless hours throwing the stick for our dog, Jack – closer to Sylvia’s house making it more convenient for her to water the tree. That it’s illegal to plant trees in Forest Park didn’t stop us from hiking in with two shovels and the huge tub that held the sapling –in broad daylight. I love Sylvia for this – and for having the idea to plant the tree in the first place. 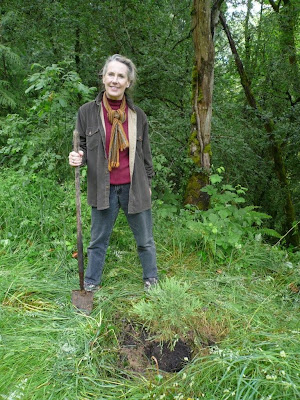 (PHOTO: That’s the beautiful Sylvia, above, with her shovel. I hope this proof of illegal activity doesn’t get her arrested!)

Fast forward to the afternoon – well, it was already afternoon by the time we did all that – I put on a sexy little dress that Marcus liked and went for a late lunch at his favorite restaurant, Pok Pok, a place in Southeast Portland that serves Thai street food in an almost street-like environment (great for tropical Thailand but not ideal for the wet Pacific NW climate). I originally thought I would have a group dinner there, invite all our friends, make a big occasion of it. And then I remembered who I was dealing with – me – and decided I better not subject anyone to my wildly swinging moods or potential grief burst. So I opted to go alone.

As I sat there gnawing on the bones of my roasted game hen and picking the sticky rice out of my teeth, I thought of the scene in M. Night Shyamalan’s “The Sixth Sense,” where Bruce Willis shows up late to his anniversary dinner with his wife. She has already finished her meal, alone, and is paying the bill. He tries to apologize to her but she gives him the silent treatment. Bruce doesn’t know (nor does the audience) that he’s dead. Reenacting this scene in my head, I imagined Marcus was sitting across from me, wondering why I didn’t order him a beer, and why I was writing him a letter instead of actually talking to him. Especially since he’s used to me talking to him, since I have said good morning and goodnight to him every day for the past 10 and a half months, as if he is still next to me in our bed.

The day flew by, because by the time I finished lunch it was already early evening and the dogs were overdue for their walk. Instead of the usual slog up the muddy trails of Forest Park I took them to Swan Island, to the riverfront trail next to Marcus’ old office. It’s a surprisingly scenic and seldom used walking path that follows the Willamette River’s sandy banks, ideal for stick throwing and terrier digging.

Self-torture comes in many forms. My choice is walking past Marcus’ old office door, the entrance where I used to pick him up or meet him for lunch. But I take the torture up a notch by listening to my iPod at full volume playing songs that remind me of him. I even made a special Playlist just for these occasions, which includes “Gorecki” by Lamb, “Run” by Snow Patrol, and my favorite, Scala’s (Belgian Girls’ Choir) version of the U2 hit, “With or Without You.” Luckily most of the employees had left the campus by this time, so no one could hear me singing too loud (and presumably off key), nor could they see me leaking tears of sadness.

SET YOUR SIGHTS ON NEW BEGINNINGS

After I got home and fed the dogs, I sat down to write a letter. Not to Marcus this time, but to my landlords. “Dear Don and Ingrid, I am writing to give you a written 30-day notice to end my lease.”

Yes. It’s time. Time to go. Portland is the place I lived with Marcus. It’s the place Marcus died. It’s the place I came to grieve. But Portland is not MY place. It’s too cold, rainy and dark for my California girl disposition and my aggressive driving habits. I gave myself a one-year grace period to grieve. Granted, it’s not August 19 yet, but a friend told me in his Jewish faith the grieving period lasts 11 months minus one day. That would put me at July 18. And given that I am grossly impatient by nature, July 2 is not too early to draw the line.

It’s a Birth Day. It is Marcus’ 44th birthday, but it’s also my first birthday. I hereby claim this day to mark the official end of my grief, and the first day of my new life. Don’t think I won’t take Marcus with me into my new year. I will recreate my shrine of the Buddha candle and the hundreds of pictures of my late husband wherever I go. I will still say good morning and goodnight every day. But I will live in a place that can better warm my bones, fill my (still puffy!) eyes with light, and therefore expedite the continued healing of my heart. Not to mention, I want to live in a place where I can wear my new skirt and top more than two months out of the year. I just hope Sylvia will remember to water the tree after I leave.