I was on the phone last night with a reporter from ABC News in San Francisco, Wayne Freedman. A friend of mine works at the TV station and when she heard Wayne was looking for stories about life in rural America, she told him about me living in the American Gothic House. So there I was, answering Mr. Freedman’s questions about how life in Southeast Iowa compares to, say, San Francisco or LA (I have lived in both cities) and I’m telling him, “I love it. It’s so peaceful and grounding. And I have great neighbors who help me till my garden and clear snow off my sidewalk without even being asked. I think that’s one of the big differences.”

“What do you do for entertainment?” he asked. “Like in the evenings.”

It was about 6:00 p.m. when we were speaking (4 p.m. his time) and I had been sitting outside on a lawn chair drinking a pilsner, still dressed in my bicycling clothes, just back from my first outdoor road bike ride of the season. I got up to walk in the house as I began to answer his question and noticed the bathroom door was closed. I never close that door. Maybe the wind blew it shut, I thought absentmindedly as I continued describing my social life.

“Entertainment? Oh, people come over to visit. We drink wine. We eat ham balls…” I was saying as I opened the bathroom door. And that’s when my words stopped and my scream started. I screamed and screamed and screamed like an actress in a B-list horror film.  But my scream was real. And Wayne Freedman’s broken eardrum can prove I was not acting.

Draped between the doorknob and the sink, blocking the door so it couldn’t open very far, was a diamond-patterned rope, like one of those very thick velvet ropes that blocks movie theater entrances. A rope? A slimy rope with scales? In my bathroom? What? No, it wasn’t a rope; it was…moving! My brain was trying to register what this thing was in my doorway. My hand was mere inches away from it, my fingers on one side of the door knob, his body wrapped around the other. It moved again. I was moving too. FAST. In the opposite direction. And screaming. LOUD.  I flew out of the house, leaving the bathroom door open (which I would later learn was a mistake), still screaming in Wayne’s ear, and then, once outside, I went around to the bathroom window to look inside and examine what the hell was going on.

I gave Wayne the blow by blow report.  “It’s huge!” I said breathlessly. “It’s crawling up the wall! It’s on the towel bar. It’s huge! I cannot believe how big it is!! Oh my god, oh my god, oh my god! How did it get in there?” (I would have to go back and ask Wayne what my voice sounded like at that point, but I don’t think “calm” would be a word used to describe it. ) “I have to go,” I said. “I need to get my neighbor.”

I didn’t walk, I sprinted over to Don’s house, the neighbor who tilled my garden and cleared snow off my sidewalks. And towed my Mini Cooper out of the mud. He is the neighbor who saw me pulling weeds around the perimeter of my garden on Sunday and drove over on his tractor. “There’s an easier way to do that,” he said and 30 seconds later he had driven around my plot and mowed down the encroaching grass and clover.

Don was also the one I ran to the day before when I ran over a 20-pound snapping turtle that was napping under my Mini Cooper. I heard the crunch under my tires and got out to find an enormous turtle rolling on its side, clearly in pain. I had stood in Don’s living room with tears streaming down my face, feeling so badly about injuring – maybe killing – this poor turtle. Don had said, “We could call Jimmy Bedford. He eats turtle.” Which made me cry even harder.

Don’s wife Shirley smiled and said, “Oh, you’re one of those gentle souls with a soft spot.” 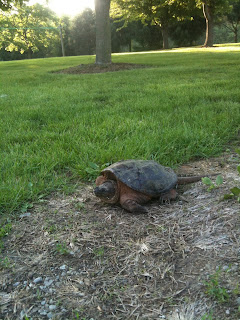 Don put on his shoes and came over to inspect the snapping turtle but the turtle had already crawled away. We found him 20 feet away under my living room windows, drops of blood on his head, cracks in his shell, and snarling at us. “Oh, he’ll be all right,” Don said. “It’s very hard to kill one of those. He’ll find his way back to the creek.” There is a small creek about a hundred yards downhill from my house. And I hope that’s where he is now. And where he stays.

This time it was not about an injured turtle. “DON! GET YOUR SHOES ON!” I screeched. “And bring your gun!” I think I really did say that about the gun. I’m not sure if I was even joking. I was that panicked. He jumped out of his Barca lounger, turned off the TV, and hustled out the door. I was already waiting in his driveway.

Bob and Iola, my other wonderful and helpful neighbors who live next door to Don and Shirley, heard the commotion and followed us back to my house. We were now the Snake Posse.

Don’s doctor had told him last week that he needs to get more exercise. As we walked briskly down the gravel drive to my house, I teased, “If this keeps up, Don, and you have to keep coming over to my house to rescue me, you’re going to get in really good shape.” He was carrying his long-handled garden hoe, so I added, “Isn’t that the hoe you were going to loan me for my garden? I’m not sure I’m going to want to see that thing again after you’re done with it.”

Before going inside I kicked off my flip flops and put on my tall rubber boots. Never mind they were caked with dried mud and I had just scrubbed my floors. I wasn’t going to have any snake wrapping its body around my bare ankles.

The four of us peered into the bathroom and could not find the snake. “I swear I am not making this up!” I insisted.

“You should have closed the door. That snake could be anywhere,” Don said. We set off in all directions around the house on our snake hunt.

I went back into the bathroom, first looking up to make sure that snake wasn’t going to drop down from the ceiling or off a wall, but I was slightly more confident now that I had my boots on and my Rescue Team with me. “There it is,” I pointed to Don. “Behind the towel shelf, curled up around that bag of Epsom salts.”

I backed out of the room, shut the door, and left Don to his work. Bob stood guard at the door while we listened to the ruckus. The snake had knocked all my candles and lotion bottles off the counter, towels had been pushed to the floor. My bathroom is tiny, so narrow you have to step sideways to move in and out. But there was Don, banging his garden hoe around, bravely battling the snake.

Meanwhile, Wayne emailed me. “Send me a picture of it.” So I began documenting the occasion with my iPhone and sent Wayne updates throughout.  When he saw the snake was getting beheaded he wrote, “You’d get arrested for that if you were in California.”

You could get arrested in Iowa too. I did an Internet search later and discovered the snake was a bullsnake, a non-venomous variety found in the prairies and good for keeping rodents from eating the farmers’ crops. I also learned it’s illegal to kill bullsnakes in Iowa.

“It was self-defense,” Don assured me when I told him. “Anyone who finds one of these inside their house is going to kill it.” I don’t think Don wanted to see me burst into tears again. Anyway, I wasn’t going to cry knowing that if the snake stuck around he could have found his way into my house again. God forbid he would turn up in my bed!

It took over an hour to end the life of this wayward reptile. How and why – and WHEN – he got in my house I will never know. “We see how you leave your back door open,” Don and Bob both harped. “It could have just come right in. I’m surprised your dogs didn’t see it.”

After flinging the corpse into the woods, we all sat around my outdoor table and drank lemonade. Bob, Iola and Don all told more tales of snakes encounters they’d had over the years. It was like sitting around a campfire telling ghost stories.

I kept my rubber boots on and sat back and smiled. I was still a little shaky, but I felt safe and content surrounded by these new friends whose company and stories – and rescue efforts — I so greatly enjoy and appreciate.

No, this is nothing like life in San Francisco or LA. And while I do love the city life (and clearly, indicated by my screaming over the snake, I still am a city girl), I am in love with my rural surroundings.

And Wayne wanted to know what we do for entertainment in Eldon, Iowa? Well, he got a live report. He also got a first-hand understanding of why I love my neighbors so much. Now he will just have to stop by this summer for ham balls. And pie.