Pedaling Across Iowa for Pie 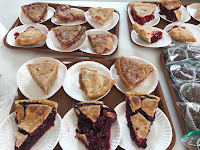 RAGBRAI, the Des Moines Register’s Annual Bike Ride Across Iowa, is really all about the pie. The Amish, the church ladies, home bakers and commercial bakers alike can be found all along the 500-mile route feeding the masses their homemade goods from strawberry-rhubarb, peach, blackberry, apple and more. Sometimes they even have homemade ice cream to go with it. Which is why I just HAD to pump up my tires and join in the fun for three out of the seven days — along with nearly 30,000 other people on bikes. 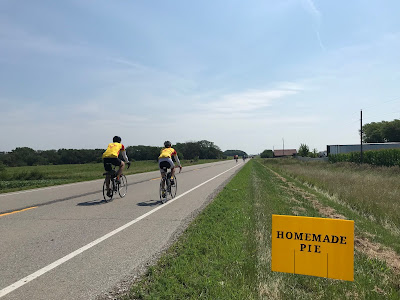 I hadn’t planned on riding this year, but once the event got underway and I started seeing all the pictures and the social media posts of all those people smiling and laughing and exercising — and yes, eating all that pie — I developed a severe case of FOMO (fear of missing out) so I hitched a ride to Bloomfield and joined in the sea of bicycles as it flowed eastward.

I caught up with Team NPR — the acronym can stand for National Public Radio or “No Pie Refused,” depending on how you choose to see it — and rode a few days with economics reporter Scott Horsley and business editor Les Cook. I thought I was in pretty good shape, but oh man, I had a hard time keeping up with these dudes. I thought these guys had desk jobs! But they were motivated by — and fueled by — pie. (Scott told me that he first read about RAGBRAI in a Wall Street Journal article that said it’s the only long-distance bike ride where you’ll gain weight. He’s been doing the ride every year since.)

Some of those weight-inducing calories were provided by yours truly. After putting in a 50-mile day on my bike, I went home and baked until midnight. The next morning I delivered pies — banana cream, apple, peach crumble and key lime — to their support vehicle. When Team NPR rolled in for their daily pit stop they tanked up — and as you see in the photo below — some even did a toast with their pie.

They all commented that you don’t see a lot of cream pie on RAGBRAI. That’s for obvious reasons — like 90-degree days with high humidity. (Great biking weather! Especially when there are relentless headwinds. Luckily RAGBRAI provides a sag wagon to transport you to the end of the day’s route if you just can’t take it anymore.)

Their favorite of my pies, hands down, was the key lime. (The recipe is below.) And guess what? I didn’t make that one! Doug did. He’s a good pie baker too. But then he had a good teacher. Ha!

I’ve done the full RAGBRAI ride three times, starting when I was 19 years old — all the way back in 1981. (RAGBRAI started in 1973 as a bet between two newspaper reporters and is now going into its 48th year.) I’ve jumped on for a few days at a time during the past nine years I’ve been back in Iowa, yet never fully committing to the whole week. 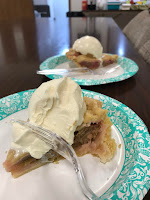 But after riding this year — after getting caught up in the contagious joy and unity of the fellow cyclists (ranging from 10-year-olds to 93-year-olds), after making new friends from all parts of the world, after getting swept up in the common goal of reaching the Mississippi River, after feeling the sense of accomplishment and freedom that comes from covering great distances under your own power, and after breathing in all of rural Iowa’s beauty on those car-free country roads…after all that, I am already planning on doing the entire weeklong ride next year.

I even have a team name already — Team Pieowa.

I posted my team name on Facebook last week. I was only half-joking, but like most of the crazy adventures that happen in my life, it gained momentum almost immediately after several people left comments. They wanted to join, someone offered to help with the support crew, and the next thing you know the idea has gone from wishful thinking to really happening. 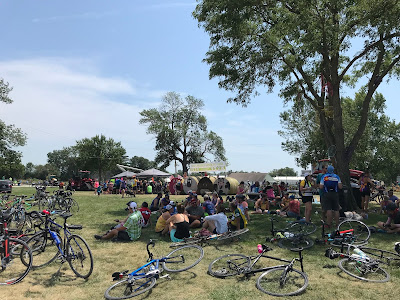 If you want to join me, let me know. We’ll need a support vehicle (maybe a van or bus or RV or just bike trailer) and a driver. We’ll want to get team jerseys designed. (Any graphic artists out there jonesing for a project?) If nothing else, this will be something fun to focus on during the long winter months, something to look forward to and a reason to not slack off on the exercise. There will be no last-minute decision to go, no FOMO. Only miles of cornfields and open sky; thousands of happy, healthy people; new friends to be made; local communities welcoming visitors; pies waiting to be enjoyed. Like labor pains, I will have long forgotten about the trifecta of heat, headwinds and hills, forgotten a
bout the sore muscles and sunburn, and I’ll be excited to do it all over again.

Next summer — July 19 – 25, 2020 — you will find me, along with thousands of other people, pedaling across Iowa in a community effort of endurance and fun.

I hope you’ll come along for the ride.

For more info on RAGBRAI: https://ragbrai.com 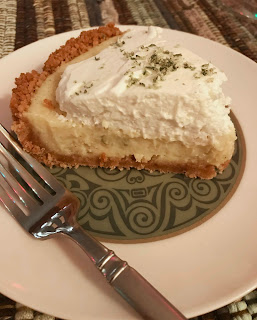 Optional ingredients: 1 tsp cinnamon and 1/4 cup sugar (I make mine without these)

Crush crackers by putting in a ziplock bag and roll with rolling pin. Mix melted butter into cracker crumbs, then press into pie plate. Bake at 350 for 10 minutes.

Optional step, but one that I always do: Beat 2 egg whites until stiff and fold into this mixture. This will make your filling lighter.

Pour into pie shell. Bake at 350 degrees for 20 minutes or until filling is set. Let cool, then chill for at least 3 hours. Top with whipped cream. Store in refrigerator up to a week.

Beat cream and sugar until peaks form. Spread over top of cooled pie.

TIP:
Instead of little key limes, you can also use “regular” limes, also known as “Persian” limes. They are bigger and juicier and thus easier to squeeze, but are said to be less tangy than key limes. However, I did a taste test with a few key lime pie aficionados in Key West, people who swear by using key limes, and they all voted for the pie made with the Persian limes. Even the experts were fooled. Go figure. (This is why I insist on questioning authority and thus dispelling myths.)

TIP:
You can use bottled lime juice. Recommended brands are Nellie and Joe’s or Manhattan (unsweetened). It’s a lot faster and easier than squeezing those mini key limes and will keep your fingers from pruning. That said, I always prefer using fresh fruit.