This was all H’s idea. As for me, after a verrrry long summer of pie slavery, I mean pie baking, I was quite relieved that the Pitchfork Pie Stand was closed for the season. But no. Halloween is H’s favorite holiday. And apparently pumpkin pie is one of his favorite pies, because no sooner did I hang the “Sorry, We’re Closed” sign on my door, H suggested, “Hey, let’s have a Pumpkin Pie Palooza.” Yeah, sure, okay, I replied in my love-struck state.

And so it begins, the preparation for one last pie-making hurrah of 2011. It’s the same routine of the summer — shopping for mass amounts of ingredients, rolling industrial-quantities of dough, boiling over pie filling in the oven clouding my kitchen with smoke — except that it will be condensed into the next three days.

H has been very sweet and supportive about the whole thing though. We kicked off pumpkin pie season a few weeks ago when we went on a local “farm crawl.” The first farm we stopped at was Pierce’s Pumpkin Patch… 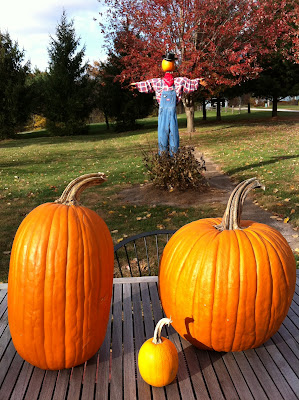 …where we stocked up on pumpkins that have been adorning the backyard of the American Gothic House ever since. One of the pumpkins even found its way onto the clothesline post — as the head of the scarecrow. Which was also H’s idea. (Seems that spending time in rural Iowa is bringing out his creative side.)

I had my own creative ideas for decorating the backyard (below). After all, October is not only about Halloween, it’s Breast Cancer Awareness Month. But I digress… 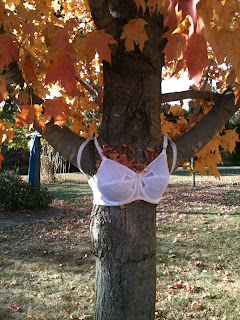 H also bought me a pumpkin pie sign. It’s adorable. And thoughtful. And reminds what a great guy H is. Not that I need reminding. 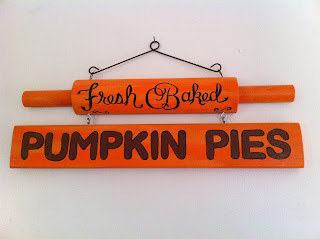 But really, H outdid himself today. While I was home getting caught up on work, he went to the grocery store —Aldi, of course — and bought all the remaining ingredients I needed to get started. He sent me this photo from the parking lot: 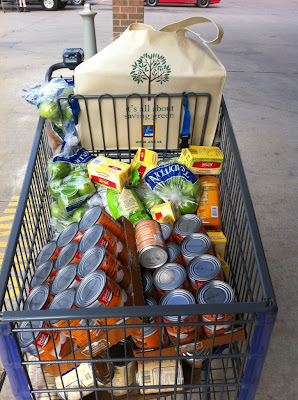 And now…it’s my turn to step in. Tonight I’ll be making dough. Tomorrow I’ll be rolling it. Friday I’ll mix gallons of pumpkin custard and peel 60 pounds of apples, since we’ll also offer apple pie. And on Saturday, I’ll get up early to bake. And bake. And bake. 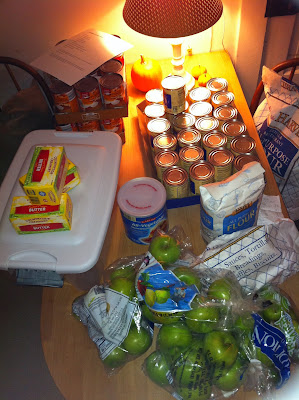 And finally, this Saturday from 12 to 4, we’ll have pie for sale at the Pitchfork Pie Stand. We won’t be open again until Memorial Day — I swear — so please come by for this Saturday’s one-day event. The weather report is for 60 degrees and sun so we’ll set up the pie stand outside in the yard. And even though I occasionally grumble about what hard work it is to run a pie stand, I’m really looking forward to a crispy fall day with the cinnamon scent of pie permeating the air. And not to just selling pie, but to eating some too!

Meanwhile, since so many of you come to my blog looking for recipes, let me fill you in on my “secret recipe” pumpkin pie. It’s straight off the Libby’s canned pumpkin label. Uh, yeah. There you have it. Hardly a secret. It’s tried and true, it doesn’t call for nutmeg (which I abhor for its overpowering taste), and — always a prerequisite for me — it’s easy.

BAKE in preheated 425° F oven for 15 minutes. Reduce temperature to 350° F; bake for 40 to 50 minutes or until knife inserted near center comes out clean. Cool on wire rack for 2 hours. Serve immediately or refrigerate. Top with whipped cream before serving.