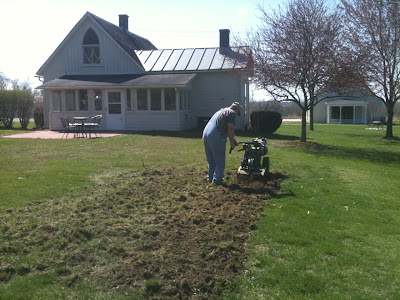 No sooner did I finish the first draft of my manuscript for MAKING PIECE, I looked up from my laptop and realized three months had passed. Spring had arrived. The snow had melted, buds were popping out on the trees, the grass had turned vibrant green and my nice neighbor Don Eakins had come over with his tiller and plowed a garden for me in the backyard of the American Gothic House. “Good,” I thought. “A garden will keep me busy now that I’m done with the book. I can throw myself into this new project as a way to stay engaged, have a purpose, keep me from getting restless.” (If you know me, you know I suffer from occasional bouts of Wanderlust. Restlessness is a symptom, one I fight to keep at bay.)

“Not so fast,” Don said. “I still have to till a second time, and you don’t want to plant the seeds too early. We may still get some frost. You want to wait until the first of May before planting.”

What could I do with myself with all that time on my hands and no more pages of my book to write? I didn’t even stop to think about it. I simply packed my dogs into the Mini Cooper and hit the road — for L.A. My spontaneity took even my parents and closest friends by surprise. “You’re what? You’re already on your way?” Yes, well, why not? I have a window of free time before my editor gives me the (likely daunting) task of rewriting my book. I have a few weeks before I can plant my garden. And once the pie stand opens — now scheduled for May 20 — I will have non-stop baking that will demand my focus.

I took four days to travel West, retracing the route I took last August on my way to be a pie judge at the Iowa State Fair. Little did I know that August journey would lead to the American Gothic House and a new life in Eldon, Iowa!

On Sunday morning when I pulled out of town, I stopped to say goodbye to the mayor, Shirley Stacey. When I told her that I was taking a road trip to California, she said, “You’re not moving back there, are you?”

“NO!” I assured her. “Just going there to regroup, see my friends and family, and then I’ll be back to make pie. I promise.”

So while there’s no pie baking — or writing — or gardening — happening at the American Gothic House for the moment, there’s a lot of adventure to be had. On the road. In L.A. and all points in between. In the meantime, maybe I’ll even start blogging again. Now there’s something to keep me busy.

It’s nice to be back.