Betty, my landlady, knocked on my door yesterday and said, “Jim Carrico called.” Jim is a long-time and well-loved resident of Terlingua. He served as the Superintendent for Big Bend National Park for many years, and later invested in a successful adventure outfitter, Desert Sports. My first reaction to her news was that he had died. The 70-year-old man had suffered a stroke last year. I met him my second week in Terlingua when Betty invited me along on a Sunday rafting trip down the Rio Grande; a group of locals and the owners of Desert Sports would be floating through the famous Santa Elena Canyon. The catch was they were taking Jim Carrico; it would be his first time on the river since his stroke, a stroke which had left him in a wheelchair for months afterward. He could walk – and talk – now, but he would require that we all pay special attention to his needs. Even at 70 he was so handsome, fit and charismatic I paid attention to him alright! What a dashing and lovely man! 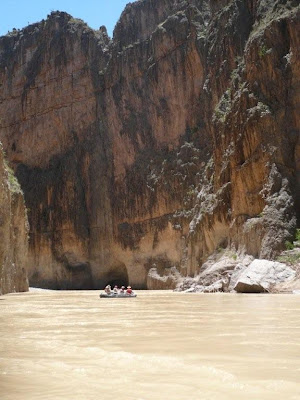 PHOTO: From our day in Santa Elena Canyon, May 2009

The reason I thought he might have died was that just a few days earlier Betty had expressed concern about his well being. That’s because he and his wife were driving their truck, camping trailer, dogs and cats from Terlingua to the cooler climes of Colorado — and Jim would be the sole driver.
It took me a second to realize he wasn’t dead or he wouldn’t have been able to call. Duh! “Is he okay?” I asked, holding my hand over my heart to recover from my nonsensical scare.
“He’s fine. He called to ask if you want some rhubarb from his garden,” Betty continued. “He wanted to know if you would want to use it for pie.”
“He called to offer me rhubarb? I didn’t think he would even remember me.” I was in a different boat on our river trip and the only time we interacted was when I offered him some of my Peanut M&Ms, which as I recall he politely declined.
“He asked if Beth the pie baker was still here and I told him you were,” Betty replied. “Have you ever made a rhubarb pie?”
I laughed. “Yes, when I baked pies in Malibu I used to make strawberry-rhubarb pie for Dick Van Dyke. It was his favorite. One day his wife came in to tell us that Dick didn’t think the pie was sweet enough. I checked the recipe and discovered he was right, I wasn’t adding enough sugar.” Then I asked Betty, “Do you want to drive over to Jim’s together and get the rhubarb?”
Betty looked at me quizzically. “To Colorado?”
“What? He was calling to offer me rhubarb from his garden in Colorado?” My morning coffee must not have fired up my brain cells yet, because I kept getting confused. “Yeah, I guess you can’t really grow rhubarb here in this desert. Is it frozen or what? How is he going to send it to me?”
“I think he’s planning on picking it from his garden and mailing it,” she said.
“Well, please tell him I’d be happy to have it.” I spent the rest of the day buoyed by Jim’s sweet offer. I still shake my head to think that he sees rhubarb in Colorado and it makes him think of me, a newcomer to his hometown and a practical stranger, baking pies in Terlingua. I continue to be baffled – and happily impressed — by the power of pie and the generosity of people. When the rhubarb arrives I’ll be freezing some so I can make him a pie upon his return. Until then, I’ll be making daily trips to the post office, waiting for his package.