While it was great to get the pie swag, I doubt I’ll be a likely candidate to receive more free pie stuff after I write about my baking experience on Sunday. So if you’re not a PR person, read on.

As I was saying….On Sunday, I set up my bowls and pie plates in my “test kitchen” (i.e.: a butcher block island in the middle of my studio apartment). I put on my new (Pillsbury) Love the Pie t-shirt (Doh! 2 sizes too big), cut open the bag of the Stone-Buhr flour (nice soft consistency! Like baby powder), and finally opened the “Pies, Pies, and More Pies” cookbook. Suddenly it was like being back in Sister Katherine’s biology class during Catholic high school (but without the plaid skirt and kneesocks). Akin to torturing me with a textbook, putting a recipe in front of me is just asking me, no BEGGING ME, to break the rules — a skill I perfected during those teen years. 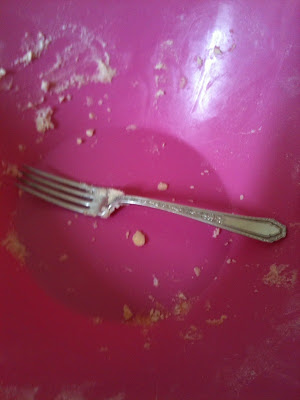 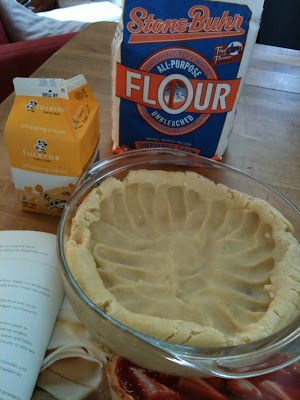 Broken Rule #2: With a consistency like cookie dough, why bother rolling it? For that matter, why waste 30 minutes out of your life chilling it? I just pressed it into the pie plate and it worked. Besides, no one would see my finger prints once the fruit was in it.

Broken Rule #3: Switch cookbooks mid-recipe. I did use the egg yolk and heavy cream the dough recipe called for (proving that I can obey — within reason), but when it came to the strawberry filling I didn’t have any gelatin powder. So “Pies, Pies, and More Pies” got the boot. I hauled out another cookbook — “The Grand Central Baking Book” — and found a strawberry pie recipe that uses cornstarch instead, an ingredient I did have on hand. 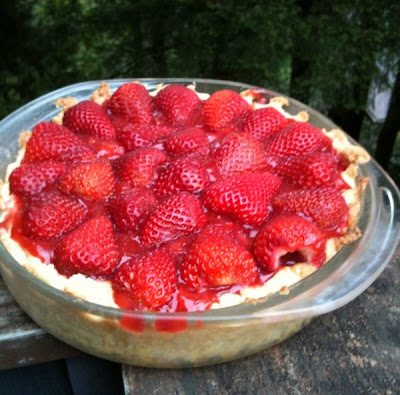 The miracle of pie is that no matter what rules you break, it usually tastes good! But I needed to find out for sure. The problem was, I made this pie for a Memorial Day brunch. I couldn’t cut into it. I had to take to the party.

Thou shall not give into temptation…. 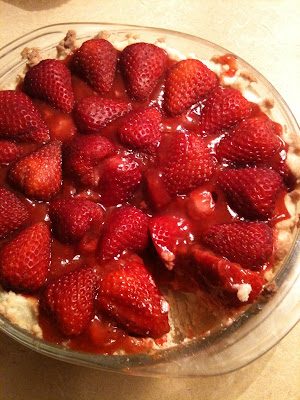 ….unless you are someone like me who nearly got kicked out of Catholic school.

Broken Rule #4: Grab a slice for yourself before taking the pie to a party. Just fill in the missing piece with whipped cream. No one will ever know!

The problem is, they did know. I thought I was being so clever posing the question on Facebook. “I just made a fresh strawberry pie. Would it be wrong to have a piece before I bring it to the party?” A friend at the brunch had seen my post and told everyone before I even arrived.

The ensuing flack was worth it. What a great pie! Or as my friend Lyndsay put it, “OMG, your strawberry pie was so f***ing good!” Another friend, Toby, said, “This crust is AWESOME. What’s in it?” Oh the irony!

It just goes to show what can happen if you don’t follow a recipe. And if she had had a piece, I’m pretty sure even Sister Katherine would have approved.