Sweat, Tears and Boxes in the Basement

I’ve been spending a lot of time in my basement lately. Why? Because it’s zero degrees outside, my basement is dry and spacious, and Marcus bought a bicycle trainer before he died and I figured I could put it to use. A trainer is a bike stand in which you hook up your rear tire to a resistance unit, a rolling cylinder that allows you to pedal, shift gears, and pretend you’re riding up mountains or across Iowa prairies, all while staying in one place. Like the comfort of the heated basement in the American Gothic House.

I had been thinking of turning my basement into an exercise room for a few weeks now. But like most people do with exercise, I procrastinated. The only thing I would have to do to transform the space into a home gym was break down my empty moving boxes, and push the big plastic gear-filled tubs to the sides. Several of those tubs contain my pie baking supplies, however, others contain Marcus’ stuff. The stuff I should let go of, but am still clinging to. Sixteen months after his death I am still trying to make peace with giving his things away. Warm things. Winter clothes that I told myself this time last year could be used by people in need, like the homeless or the poor or the cold. These days I am feeling braver. Almost healed. So I thought, okay, I’m going to try again.

I opened the lid of one of the bins and pulled out a brown cashmere coat. Marcus bought it during one of our trips to New York and had worn it so often the image of him in it was indelible. I couldn’t give this to a stranger! But I could give it to my brother in Seattle. It’s cold there, he could use it. I took out a pair of hand-knit socks and a pair of suede gloves to send along with it.

I also took out a bicycle jacket, a silver sleek, windproof, fleece-lined thing that Marcus bought two months before he died at the Assos factory store in Switzerland. Factory store or not, he must have paid the equivalent of at least 300 bucks for it. (I must say, he had exquisite but expensive taste.) He had bought me one too, for my birthday in June. Mine was pink, and I found it in his luggage after he died. (I won’t even go into how heart wrenching that moment was.) 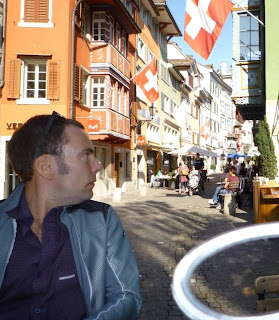 I had never seen him wearing his new jacket except for in a few pictures. The photos were taken in Zurich, during a day-trip with his cousin’s 12-year-old son, Felix. Marcus was playing the role of big brother or uncle to Felix, it doesn’t matter which — what I remember is how he called me that day from Zurich sounding so excited that he was giving this kid his first “international” experience (it was Felix’s first trip outside of Germany) and how, during an elegant Swiss lunch, he had introduced Felix to the culinary joys of Carpaccio.

The prized bike jacket, I had decided months ago, would go to our friend John Climaco. My relationship with Marcus started in large part because of John and his wife Laura. John and I worked together at my Big Fat Dot Com Job in San Francisco in 1999, and when he and Laura got married in Florence, Italy in 2002, Marcus joined me for their wedding. It was my first date with Marcus. He was only going to stay a day or two, but when he stayed the whole week, it became clear our “date” would lead to much more. 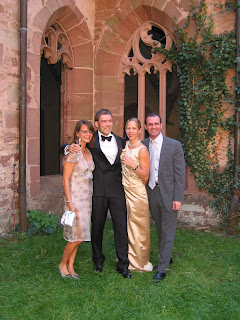 In turn, John and Laura came to our wedding in Alpirsbach, Germany, serving as our Best Man and Maid of Honor. When Marcus died, Laura was seven months pregnant with her second baby (a girl), and in one of those Circle of Life ways, John and Laura surprised me by asking me to be little Athena’s godmother.

Marcus would have liked that. And John would like the bike jacket.

﻿One coat, socks and gloves for my brother and a bike jacket for John was not exactly the generous give-to-the-homeless/clear-the-basement effort I had in mind, but it was a step. I was even slightly proud of myself for my courage to let go of these specific items, so symbolic and loaded with memory. I brought the coat and bike jacket upstairs and packed them into mailing boxes.

Later that evening I went for my inaugural basement bike ride. It wasn’t easy setting up the bike trainer. It’s a Blackburn Trakstand Ultra, a high-end piece of equipment, and it had never been used (underscoring Marcus’ lost dreams and goals for his future). The back wheel didn’t stay locked into place, the tire dragged on the floor burning rubber, and the front wheel was squirrely. But after a few outbursts of profanity I managed to get everything straightened out.

I was pedaling up the mountain, so to speak, and the more energy I exerted the more I felt my cells release the impurities held inside each one of them. The harder I pedaled the more the residual gunk came unstuck from my membranes and exited my body via my sweat. The sugar from all those Candy Cane Joe Joes I’m addicted to. The alcohol from the red wine. The fat from many years of bacon cheeseburgers. And not just the physical but the psychic gunk too. Grief lingers in my cells like plaque hardened on arteries, and heavy exercise taps into this well of grief, a spring that bubbles far below the surface where I prefer it to stay. I used to love long distance running, but I don’t run anymore because when I have tried I’ve only ended up doubling over with sadness in the middle of my workout, bawling so hard I was unable to continue. When you’re three or four miles out on a trail carrying a heavy load of grief, believe me, it’s a long walk home.

I didn’t have the reserves during the first year after Marcus died to manage this deep, cellular level grief. But having had time to heal, rebuild a support system, gather emotional strength, and move to the peaceful prairielands of rural Iowa, I am better equipped. Besides, on a stationary bike, the risk of having a grief burst miles from home is eliminated. If I have an emotional breakdown I can just go back upstairs. To my bathtub and a glass of wine.

I turned up the volume on my iPod as high as it would go and keeping pace with the music moved my legs as fast as they would go. And there, in the safety of my windowless (soundproof) basement I once again touched the void. The recognition that I was using Marcus’ bike trainer crept in, along with the image of his post-office-ready coat and bike jacket on my desk upstairs. And then the flood gates opened. Along with a slide show of mental images of my late husband came the tears. I continued pedaling as long as my legs would hold out, until I practically collapsed. Spent, I laid my forehead on the handlebars and just sobbed. Puddles of tears gathered on the floor, and I was cognizant enough to have the thought “Good thing the floor is concrete.” Sheesh.

My body is like Marcus’ bins of clothes and gear. Inside it my grief has been in storage — with the lid firmly in place. I’ve been hanging onto it, reluctant to let it go. Letting go of the grief, like letting go of Marcus’ clothes, means letting go of him. I don’t want to lose anymore of him than I already have.

And so, like a snake shedding yet another skin from the inside out, I let the tears come. Crying can be as helpful and cleansing as exercise, clearing out the debris and making room for the new. And because I was both exercising and crying, I figured I would be twice as well off after my little “work out.”After an hour, I wiped the snot from my nose on my shorts, changed back into my overalls, and left my heap of sweaty (and snotty) bike clothes on top of the washing machine.

I headed back upstairs feeling depleted but a little bit lighter, my eyes puffier but my cell membranes more fluid and freer than before I started my bike ride. A few calories burned, a little less burdened by grief, and with memories of Marcus still fully intact, it was all a win-win.

The packages with Marcus’ belongings are still sitting on my desk, but I have willed myself to go to the post office today. I will muster up the strength to say goodbye to a few more pieces of the man I loved — still love — and take heart in knowing they will be appreciated and well used by people Marcus knew and cared about.