Bob Webb, Mimi’s Dad, came to stay at La Posada Milagro for a few days. He’s 83, with both a mind and sense of humor as sharp as a cactus thorn, and he loves pie. Because last night was his last night in Terlingua I promised I’d make him a pie, any pie, he could choose. So we sat down with an ancient and tattered copy of the old Better Homes & Gardens cookbook (1953 edition, the same one my mom has) and flipped through the pie recipes. Banana Cream, he decided. Ha! My dad’s favorite too. So while Bob, Mimi and everyone else in Far West Texas were taking their afternoon siestas I set to work in the kitchen preparing his special pie. 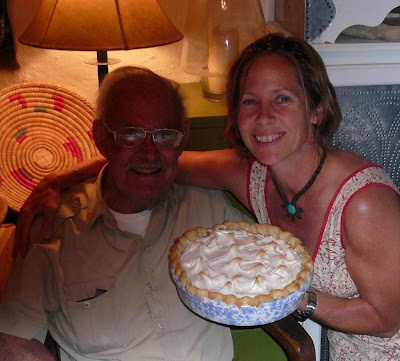 Here we are, Bob with the pie baker. But how would it taste? Would he like it? 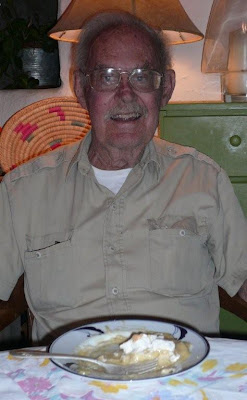 Buttery crust, perfectly browned meringue, extra bananas…he gave my pie a thumbs up. He didn’t even look up until he cleaned his plate.
When we’d finished our family supper we said our “goodnights.” But I would be back to Mimi’s house sooner than I knew.
When I got to my room I discovered I had an uninvited guest. 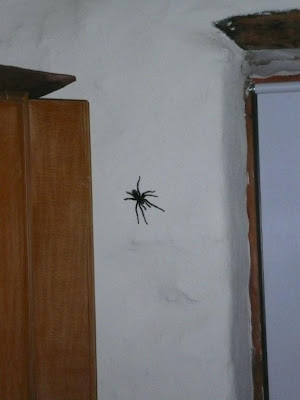 I grabbed my flashlight and my dogs and ran back to Mimi’s house (each bedroom here is like a separate house). “Mimi!” I said breathlessly. “I have a tarantula in my room.”

“OK,” she said. “I know what to do.” She grabbed a Tupperware bowl and followed me back to my room. 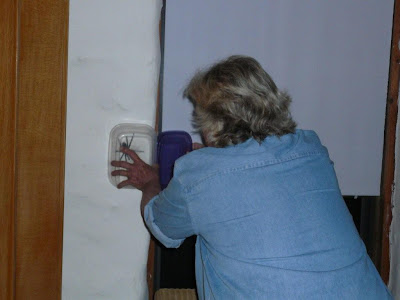 Mimi placed the bowl over the spider, calmly, expertly, as if she’d done this a thousand times. “Usually I see them walking across the path when I’m going to the outhouse in the middle of the night,” she said. “I almost step on them and that always sends me to the moon.”

“I was proud of myself for not screaming,” I told her. “But my heart is racing pretty fast.”

“You did good,” she said. I beamed like a praised child, the compliment all the more meaningful coming from a woman who pioneered this place 30 years ago. 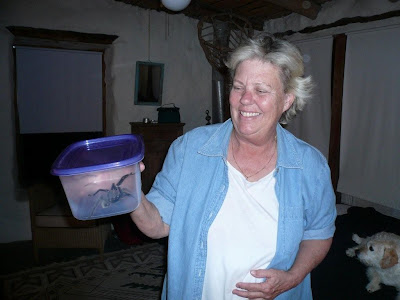 Captured! It was now safe to go to bed. And though tarantulas aren’t known to travel in pairs, I tucked the mosquito netting in tightly around my bed, just in case.
I lived through the night to tell the (true) tale — the proof is not only in the pictures, Mr. Tarantula is still in his Tupperware — and to have a piece of banana cream pie for breakfast with Bob before he left for his home in Witchita Falls.
PrevPreviousKathy’s Kosmic Kowgirl Kafe
NextFive Reasons to Stay in TerlinguaNext
Subscribe for Updates
Copyright 2022 | All Rights Reserved
Facebook Twitter Youtube Instagram Goodreads-g Pinterest