The (Snowy) Road to Taos

“Travel not to find yourself but to remember who you’ve been all along.”

— as seen on a plaque yesterday in a home decor store

In November, Hillary lost the election. In March, I lost my dad. A month later, in April, I lost my goat, Cinnamon. After all that I thought I was also going to lose my mind. Writing is my best form of therapy, and on his deathbed, my dad reminded me, “Words matter.” But my brain was such a muddled, grief-stricken mess I was stuck. I put my fingers to work typing “writers retreats” on Google and found one, one that I was sure could get me back on track. It was for smart, ambitious women suffering from writers block. It was in the spiritual Mecca of Taos, New Mexico. It was sold out.

I wrote to Jennifer Louden and pleaded my case. “I NEED THIS. DESPERATELY,” I implored, telling her how I had just lost my dad and my goat. “Please, please, PLEASE, can you get me in?”  I got a reply so quickly it was like a form letter. “We‘ve added you to the waiting list.” Period.

My friend Kee Kee assured me I would get in. Though she suggested I just go to Taos anyway, that a road trip might be as much as I need. But no. I wanted structure. I wanted community. I wanted someone to use their velvet whip on me to get me back in the chair.

I sent my plea on a Friday. On Monday afternoon I was told I had cleared the list but still needed to send in an application—which was a bunch of questions about why you want to write, what you’re working on, and what you hoped to get out of the weeklong workshop—a vetting process. Tuesday morning I was told I was in. Yes!

I packed my car (actually Doug’s car since his SUV was bigger and safer than my Mini Cooper) and left Iowa on Friday morning, April 28. The workshop started on Sunday, April 30. Google maps calculated the driving time at 16 hours. No problem.

When I left the farm it was raining. It kept raining all through Missouri, Kansas, and Oklahoma. Doug, who as a farmer is obsessed with his weather app, stayed in close touch, giving me regular updates about the latest developments on the radar. He told me it didn’t look so good. I didn’t need him to tell me that because I could see for myself—the clouds hung so low they touched the ground, the rain was turning to snow. I called him to discuss the conditions.

“There’s a storm system that is coming up along the eastern edge of the Rockies,” he said. That’s exactly where I was headed.

“Okay, then I’m going to make a detour and head south,” I told him. “I’ll just drive around it. It will add a few extra hours but at least I will be safe.” He agreed with me that it was a good plan.

As I pointed south, weaving my way through the Panhandle’s sea of wheat fields and oil rigs, I came to the town of Canadian, Texas. I was going to keep pushing on, but when I saw the Stumblin’ Goat Saloon I took it as an omen. The goat I had just lost, Cinnamon, was one of my favorites. She was the most beautiful out of the four, with her fluffy tan coat, white underside and a black stripe down her back. More striking was her humility. She was shy and polite, and unlike the others never pushed and shoved to get more carrots. As a tribute to her, I would stop and eat lunch. Big mistake.

Inside above the bar was a big stuffed white goat, not just a head and horns, but the entire front half of the goat’s body. It didn’t look like Cinnamon; it looked exactly like one of our other goats, Mr. Friendly. I should have walked out then. Instead, I stupidly ordered a $10 burger that looked—and tasted—worse than day-old McDonald’s. As I was leaving, I passed the mayonnaise-heavy salad bar and—wait for it—there was another stuffed goat. This time it was the full body of a small goat and it was being used as a—I kid you fucking not—a bottle opener. A sign above it said, “PETA Warning: This Goat may have been harmed in the making of this bottle opener.” I have never regretted a meal more. 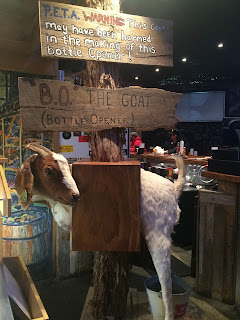 But I digress. I was dodging a snowstorm in order to get to a writers retreat on time.

After 16 hours of driving I got as far as Amarillo, still 6 hours from Taos, where I chatted up a couple pumping gas at the Flying J. They had come from the west, from Albuquerque—the direction I was going. They looked pale and shaken. “It’s bad,” the husband said. “We had to pull off for three hours because of the snow.” If the weather had been okay, I would have already checked into my historic inn in Taos. Instead, I sought refuge at a Motel 6 in Amarillo.

Now it was me who was obsessively studying the weather app. I hit the refresh button every five minutes to see if the Winter Weather Advisory had been updated, and ideally canceled. Instead, it was extended. It was supposed to end at 10AM. Then midnight. Then 10AM Sunday. Then 1PM, 2PM, and eventually 7PM Sunday. The workshop started Sunday at 6. I barely slept.

I woke up to see Doug’s car buried under a few inches of snow and the trees blowing sideways from hurricane force winds. The weather radar showed the storm, which was supposed to move to the north, had shifted (or a new one had developed) and it was centered right over Amarillo. 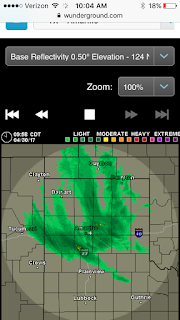 I tried to wait it out. I stayed in my room until 11 until I became too restless. I checked out and went to Starbucks, drinking a triple latte as I stared out the window at the toppled tables and chairs, the canvas of the umbrellas billowing like parachutes after a botched landing. I could see the interstate from where I sat and there were cars and semis moving down the road. Slowly. But still, they were heading west.

I examined the radar again. If I could just blast through the storm cell I would pop out the other side where sunny skies and climbing temperatures were reported.

I hate driving in rain. I hate even more driving in snow. Driving on mountain roads in bad weather is one of my biggest nightmares (after tornadoes and snakes.) In the past I thought nothing of driving in adverse conditions. But with age comes fear. My vivid—and morbid—imagination takes over and I picture myself perishing in a fiery crash, my car flipping over and pummeled, with me bloody, mangled, perhaps lifeless, in the wreckage. I never thought I would become one of those fearful people, the little old lady hunched forward in the drivers seat, gripping the wheel in terror and driving way too slow, with other drivers giving her the stink eye when they finally pass. But when the weather is bad, the rain blinding, or the mountain roads too windy and narrow, I am that old-lady driver.

I may have become more fearful but I still possess enough determination, enough grit, enough impatience to talk myself into action. It took some serious self-talk to convince myself, but I reasoned that I would take it slow. If other drivers didn’t like my cautious pace they were welcome to go around me. As Marcus taught me how to relax when faced with drivers on the German Autobahn tailgating me at 120 mph, “If they don’t like your speed, it’s their problem.” 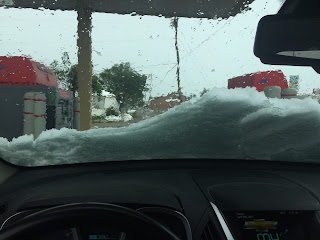 Holding my breath, I merged with the traffic on the I-40. The pavement was covered in extensive patches of snow and ice. No one could go fast even if they wanted to. In fact, once I pulled onto the interstate, no one was going more than 5 mph, because a snowplow was up ahead blocking everyone. My GPS showed a one and a half hour delay due to this traffic, and after that Grande Latte I had to pee, so I pulled off at a random exit. Bad choice. The only restaurant at the exit was closed—due to bad weather. Wishing I was wearing Depends, I had to stay on the frontage road for a few miles before there was another onramp. The frontage road was surprisingly clear of snow and as I drove west on it, parallel to the interstate, I passed the long snail line of cars, cars and more cars. And then, I passed the snowplow, and right after the snowplow was my onramp. Ha! I wanted to be happy about getting ahead of the traffic, but the unplowed freeway could have been covered in even thicker snow and ice. Fear kicked in again. But since there was no one behind I just whispered to myself over and over, “Go gently,” and drove ever so slowly. At least 30 mph was faster than 5. The road ahead, oddly, was clearer than the road behind. And soon, in a matter of a few miles—que milagro!—the road was altogether dry. Above, I could even see a distinct line marking the edge of the storm system. I was still making my way out from under the dark grey muck, but there was a cloudless blue sky dead ahead. 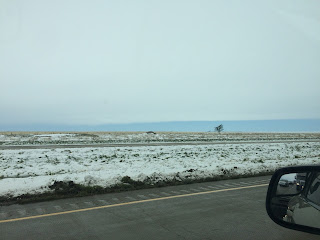 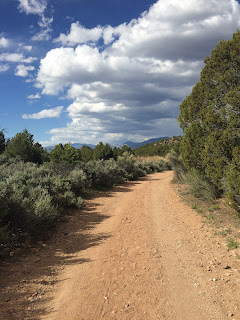 My losing streak has been followed by nothing but good. I went on to have one of the most outstanding experiences I’ve had in years. The workshop exceeded my expectations on every level. I made new friends. I wrote like a madwoman. I explored the beauty of the town, its earthy adobe buildings, and its surrounding mountains. Everything about the week went so incredibly right, like magic. Like a well-deserved winning streak. 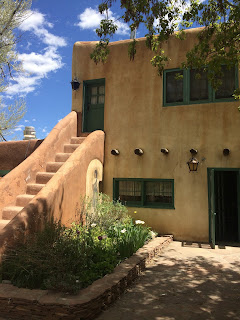 I look back and realize that storm cell hovering over Amarillo was like a metaphor for my life. Grief had been hovering over me, keeping me stuck in a metaphorical Motel 6. I know grief. I know you can’t go around it. I’ve muscled through it before and I found that in spite of the brokenness of my heart, I still had the courage and determination—and driving skills—to blast through again. It doesn’t change the fact I lost what I loved, what was so important to me (most of all, my dad—and I will most certainly be writing more about him later), but it did remind me to have faith, that even when you’re in the worst of storms, there are always, always, always sunnier days ahead. 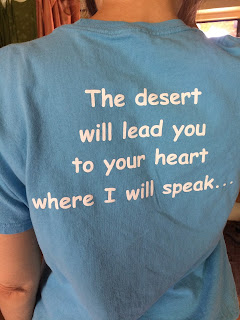 This post would not have been written if not for Jen Louden and her coaching. I wanted to go to bed early instead of writing, but I heard Jen’s voice, I felt the encouragement of the group, and thus I sat my butt in the chair and kept it glued there until this was finished. Thanks to Jen and the group for an “amazing” week. I intend to hang onto that encouragement and stay in the chair as I go forward, using my words to promote kindness.